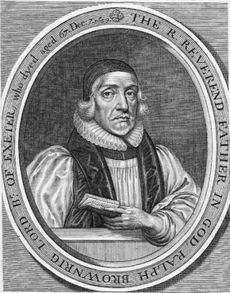 Ralph Brownrigg or Brownrig (1592–1659) was bishop of Exeter from 1642 to 1659. He spent that time largely in exile from his see, which he perhaps never visited.[1] He did find a position there for Seth Ward.[2] He was both a Royalist in politics, and a Calvinist in religion,[3] an unusual combination of the period. Brownrigg opposed Laudianism in Cambridge during the 1630s and at the Short Parliament Convocation of 1640. Nominated to the Westminster Assembly,[4] he apparently took no part in it.

He was Master of St Catharine's College, Cambridge,[8] and Vice-Chancellor of the University of Cambridge, but in 1646 was ejected from both these positions, by the Parliamentary government.[9]

He took refuge with Thomas Rich, lord of the manor of Sonning.[10]

He continued to preach, for example at the Temple Church,[3] and a collection of sermons of his was published posthumously.[11]