Ralph Cochrane was born on 24 February 1895, the youngest son of Thomas Cochrane, 1st Baron Cochrane of Cults, in the Scottish village of Springfield. Although not certain, it is likely that he attended the Royal Naval College at Osborne in 1908. On 15 September 1912, Cochrane entered the Royal Navy proper as a midshipman.[1]

During the First World War, Cochrane served in the Royal Naval Air Service piloting airships.[1] He also completed a tour as a staff officer in the Admiralty's Airship Department.[1]

In January 1920, he was removed from the Navy List and granted a commission in the Royal Air Force.[1] Between the wars, Cochrane served in various staff positions and commanded No. 3 Squadron from 1924 before attending the RAF Staff College and commanding No. 8 Squadron from 1929.[1] He attended the Imperial Defence College in 1935.[1] 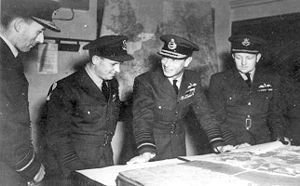 During the Second World War, Cochrane commanded No. 7 Group from July 1940, No. 3 Group from September 1942 and No. 5 Group from February 1943; all these Groups were in RAF Bomber Command.[1] 5 Group became the most efficient and elite Main Force bomber group undertaking spectacular raids.[3] Cochrane commanded the Dam-Busters raid.[4] There was intense, sometimes openly hostile, rivalry between Cochrane and Air Vice Marshal Donald Bennett, who saw Cochrane's experimentation with low-level target marking through 617 Squadron in 1944 as a direct threat to his own specialist squadrons' reputation.[3]

In February 1945, Cochrane became Air Officer Commanding at RAF Transport Command, a position he held until 1947 when he became Air Officer Commanding at RAF Flying Training Command.[1] During this time he managed the Berlin Airlift. In 1950 Cochrane was appointed Vice-Chief of the Air Staff.[1] Ralph Cochrane retired from the service in 1952.[1] Following his retirement, Cochrane entered the business world notably as director of Rolls-Royce.[1] He was also chairman of RJM exports which manufactured scientific models and is now known as Cochranes of Oxford.[1]

Media related to Ralph A. Cochrane at Wikimedia Commons