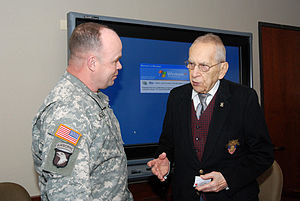 Ralph Edward Haines Jr. (August 21, 1913 – November 23, 2011) was a United States Army four-star general who served as Vice Chief of Staff of the U.S. Army from 1967 to 1968, Commander, U.S. Army, Pacific from August 1968 to October 1970, and Commanding General, U.S. Continental Army Command (CG CONARC), from 1970 to 1973. General Haines was the last commander of the Continental Army. George Washington was the first. At his death he was the Army's oldest living four-star general and its senior retired officer.[2]

Haines attended Texas Military Institute and graduated in 1930 as his class valedictorian.[3] He graduated from the United States Military Academy in 1935 with a commission in the Infantry. He later attended the Armed Forces Staff College, the Army War College, the National War College and the Army Management School. Prior to World War II he served in the Philippine Scouts and during the war he served in Italy.

Major commands for Haines included Commanding General of the 1st Armored Division at Fort Hood, Texas, from 1962 to 1963. From 1965 to 1967, he commanded the III Corps there. After his Hawaiian command, he served as Commanding General, Continental Army Command, at Fort Monroe, Virginia until his retirement on January 31, 1973.

The Ralph E. Haines Jr. Award, presented to the United States Army Reserve Drill Sergeant of the Year, is named in his honor.[5] Haines was member of the Advisory Committee of the U.S. Cavalry Association.[6] He retired to San Antonio, Texas with his wife, the former Sally Swift, who died in 2003.[7] Haines had two sons, both West Point alumni.[3] One son, Palmer Swift Haines, died in an aircraft crash in 2004 when the Cessna 421 he was piloting suffered dual engine failure near Austin, Texas.[8]