From Infogalactic: the planetary knowledge core
Jump to: navigation, search
For the earlier MP, for Heytesbury and Somerset, see Ralph Hopton (died 1571). 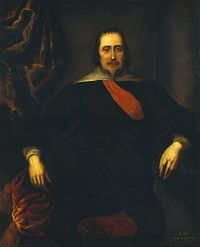 Ralph Hopton, 1st Baron Hopton DL (March 1596 – September 1652) was a Royalist commander in the English Civil War, appointed lieutenant-general under the Marquess of Hertford in the west at the beginning of the conflict.

Hopton was the son of Robert Hopton of Witham Somerset. He was apparently educated at Lincoln College, Oxford and served in the army of Frederick V, Elector Palatine in the early campaigns of the Thirty Years' War. In 1624, he was lieutenant-colonel of a regiment raised in England to serve in Mansfeld's army. King Charles I, at his coronation, made Hopton a Knight of the Bath (Order of the Bath).

In the political troubles which preceded the outbreak of the English Civil War, Hopton, as member of parliament successively for Bath, Somerset and Wells, at first opposed the royal policy, but after Strafford's attainder (for which he voted) he gradually became an ardent supporter of Charles, and at the beginning of the conflict he was made lieutenant-general under the marquess of Hertford in the west.

His first achievement was to rally Cornwall to the royal cause by indicting the enemy before the grand jury of the county as disturbers of the peace, and had the posse comitatus called out to expel them. Next, he carried the war into Devon. In May 1643, he defeated the Parliamentarian forces in the West Country at Stratton, enabling him to overrun Devon and link up with reinforcements under Prince Maurice. On 5 July, their combined forces clashed indecisively with Sir William Waller at Lansdowne. Hopton was severely wounded there by the explosion of a powder-wagon. Soon afterwards, he was besieged in Devizes by Waller; he defended himself until he was relieved by the Royalist victory at Roundway Down on 13 July. He was soon made Baron Hopton of Stratton.[1]

These successes in the west enabled the Royalists to expand their control across southern England as far as the western fringes of Sussex in late 1643. But a counter-attack led by Waller forced Hopton back to Winchester. Hopton was reinforced by a force under the Earl of Forth. But on 29 March 1644 he was defeated by Waller at Cheriton and again forced to retreat. After this, he served in the western campaign under Charles' own command, and towards the end of the war, after Goring had left England, he succeeded to the command of the royal army. Hopton was defeated at Torrington on 16 February 1646 and surrendered to Thomas Fairfax.

Subsequently, he accompanied the Prince of Wales in his attempts to prolong the war in the Isles of Scilly and the Channel Islands. His intransigent views were incompatible with the spirit of concession and compromise which prevailed in the prince's council from 1649 to 1650, and he withdrew from active participation in the cause of royalism. He died in exile at Bruges in September 1652. His title was extinguished with his death. The king, Prince Charles, and the governing circle appreciated their faithful lieutenant less than did his enemies Waller and Fairfax, the former of whom wrote, "hostility itself cannot violate my friendship to your person," while the latter spoke of him as "One whom we honour and esteem above any other of your party."[1]