pronunciation (help·info) (11 June 1897 – 19 December 1927) was an Indian revolutionary who participated in Mainpuri conspiracy of 1918, and the Kakori conspiracy of 1925, and struggled against British imperialism. As well as being a freedom fighter, he was a patriotic poet and wrote in Hindi and Urdu using the pen names Ram, Agyat and Bismil. But, he became popular with the last name "Bismil" only. He was associated with Arya Samaj where he got inspiration from Satyarth Prakash, a book written by Swami Dayanand Saraswati. He also had a confidential connection with Lala Har Dayal through his guru Swami Somdev, a preacher of Arya Samaj.

Bismil was one of the founding members of the revolutionary organisation Hindustan Republican Association. Bhagat Singh praised him[1][2] as a great poet-writer of Urdu and Hindi, who had also translated the books Catherine from English and Bolshevikon Ki Kartoot from Bengali. Several inspiring patriotic verses are attributed to him; these include the poem Sarfaroshi ki Tamanna.

Ram Prasad Bismil was born on 11 June 1897 in a religious Hindu family of Murlidhar and Moolmati at Shahjahanpur, in United Province, British India. He learnt Hindi from his father at home and was sent to learn Urdu from a moulvi. He was admitted to an English-language school, despite his father's disapproval, and also joined the Arya Samaj in Shahjahanpur. Bismil showed a talent for writing patriotic poetry.

As an 18-year-old student, Bismil read of the death sentence passed on Bhai Parmanand, a scholar and companion of Har Dayal. At that time he was regularly attending the Arya Samaj Temple at Shahjahanpur daily, where Swami Somdev, a friend of Paramanand, was staying. Angered by the sentence, Bismil composed a poem in Hindi titled Mera Janm (en: My Birth), which he showed to Somdev. This poem demonstrated a commitment to remove the British control over India.

Bismil left school in the following year and travelled to Lucknow with some friends. The Naram Dal (of the Indian National Congress) was not prepared to allow the Garam Dal to stage a grand welcome of Tilak in the city. They organised a group of youths and decided to publish a book in Hindi on the history of American independence, America Ki Swatantrata Ka Itihas, with the consent of Somdev. This book was published under the authorship of the fictitious Babu Harivans Sahai and its publisher's name was given as Somdev Siddhgopal Shukla. As soon as the book was published, the government of Uttar Pradesh proscribed its circulation within the state.

Bismil formed a revolutionary organisation called Matrivedi (Altar of Motherland) and contacted Pt. Genda Lal Dixit, a school teacher at Auraiya. Som Dev arranged this, knowing that Bismil could be more effective in his mission if he had experienced people to support him. Dixit had contacts with some powerful dacoits of the state. Dixit wanted to utilise their power in the armed struggle against the British rulers. Like Bismil, Dixit had also formed an armed organisation of youths called Shivaji Samiti (named after Shivaji). The pair organised youths from the Etawah, Mainpuri, Agra and Shahjahanpur districts of United Province (now Uttar Pradesh) to strengthen their organisations.

On 28 January 1918, Bismil published a pamphlet titled Deshvasiyon Ke Nam Sandesh (A Message to Countrymen), which he distributed along with his poem Mainpuri Ki Pratigya (Vow of Mainpuri). To collect funds for the party looting was undertaken on three occasions in 1918. Police searched for them in and around Mainpuri while they were selling books proscribed by the U.P. Government in the Delhi Congress of 1918. When police found them, Bismil absconded with the books unsold. When he was planning another looting between Delhi and Agra, a police team arrived and firing started from both the sides. Bismil jumped into the Yamuna and swam underwater. The police and his companions thought that he had died in the encounter. Dixit was arrested along with his other companions and was kept in Agra fort. From here, he fled to Delhi and lived in hiding. A criminal case was filed against them. The incident is known as the "Mainpuri Conspiracy" against the British King Emperor. On 1 November 1919 the Judiciary Magistrate of Mainpuri B.S. Chris announced the judgement against all accused and declared Dixit and Bismil as absconders.

From 1919 to 1920 Bismil remained inconspicuous, moving around various villages in Uttar Pradesh and producing several books. Among these was a collection of poems written by him and others, entitled Man Ki Lahar, while he also translated two works from Bengali (Bolshevikon Ki Kartoot and Yogik Sadhan) and fabricated Catherine or Swadhinta Ki Devi from an English text. He got all these books published through his own resources under Sushilmala – a series of publications except one Yogik Sadhan which was given to a publisher who absconded and could not be traced. These books have since been found. Another of Bismil's books, Kranti Geetanjali, was published in 1929 after his death and was proscribed by British Raj in 1931.

In February 1920, when all the prisoners in the Mainpuri conspiracy case were freed, Bismil returned home to Shahjahanpur, where he agreed with the official authorities that he would not participate in revolutionary activities. This statement of Ram Prasad was also recorded in vernacular before the court.

In 1921, Bismil was among the many people from Shahjahanpur who attended the Ahmedabad Congress. He had a seat on the dias, along with the senior congressman Prem Krishna Khanna, and the revolutionary Ashfaqulla Khan. Bismil played an active role in the Congress with Maulana Hasrat Mohani and got the most debated proposal of Poorna Swaraj passed in the General Body meeting of Congress. Mohandas K. Gandhi, who was not in the favour of this proposal became quite helpless before the overwhelming demand of youths. He returned to Shahjahanpur and mobilised the youths of United Province for non-co-operation with the Government. The people of U.P. were so much influenced by the furious speeches and verses of Bismil that they became hostile against British Raj. As per statement of Banarsi Lal (approver)[3] made in the court – "Ram Prasad used to say that independence would not be achieved by means of non-violence."

In February 1922 some agitating farmers were killed in Chauri Chaura by the police. The police station of Chauri Chaura was attacked by the people and 22 policemen were burnt alive. Gandhi, without ascertaining the facts behind this incident, declared an immediate stop the non-co-operation movement without consulting any executive committee member of the Congress. Bismil and his group of youths strongly opposed Gandhi in the Gaya session of Indian National Congress (1922). When Gandhi refused to rescind his decision, its then president Chittranjan Das resigned and the Indian National Congress was divided into two groups – the Naram Dal and the Garam Dal. In January 1923, the rich group of party formed a new Swaraj Party under the joint leadership of Pt. Moti Lal Nehru and Chittranjan Das, and the youth group formed a revolutionary party under the leadership of Bismil.

With the consent of Lala Har Dayal, Bismil went to Allahabad where he drafted the constitution of the party in 1923 with the help of Sachindra Nath Sanyal and another revolutionary of Bengal, Dr. Jadugopal Mukherjee. The basic name and aims of the organisation were typed on a Yellow Paper[4] and later on a subsequent Constitutional Committee Meeting was conducted on 3 October 1924 at Kanpur in U.P. under the Chairmanship of Sachindra Nath Sanyal.

This meeting decided the name of the party would be the Hindustan Republican Association (HRA). After a long discussion from others Bismil was declared there the District Organiser of Shahjahanpur and Chief of Arms Division. An additional responsibility of Provincial Organiser of United Province (Agra and Oudh) was also entrusted to him. Sachindra Nath Sanyal, was unanimously nominated as National Organiser and another senior member Jogesh Chandra Chatterjee, was given the responsibility of Coordinator, Anushilan Samiti. After attending the meeting in Kanpur, both Sanyal and Chatterjee left the U.P. and proceeded to Bengal for further extension of the organisation.

A pamphlet entitled as The Revolutionary was distributed throughout the United Province in India about the end of January 1925. Copies of this leaflet, referred to in the evidence as the "White Leaflet", were also found with some other alleged conspirators of Kakori Conspiracy as per judgement of the Chief Court of Oudh. A typed copy of this manifesto was found with Manmath Nath Gupta.[4] It was nothing but the Manifesto of H.R.A. in the form of a four paged printed pamphlet on white paper which was circulated secretly by post and by hands in most of the districts of United Province and other parts of India.

Bismil executed a meticulous plan for looting the government treasury carried in a train at Kakori, near Lucknow in U.P. This historical event happened on 9 August 1925 and is known as the Kakori conspiracy. Ten revolutionaries stopped the 8 Down Saharanpur-Lucknow passenger train at Kakori – a station just before the Lucknow Railway Junction. German-made Mauser C96 semi-automatic pistols were used in this action. Ashfaqulla Khan, the lieutenant of the HRA Chief Ram Prasad Bismil gave away his Mauser to Manmath Nath Gupta and engaged himself to break open the cash chest. Eagerly watching a new weapon in his hand, Manmath Nath Gupta fired the pistol and incidentally a passenger Ahmed Ali, who got down the train to see his wife in ladies compartment, was killed in this rapid action.

More than 40 revolutionaries were arrested whereas only 10 persons had taken part in the decoity. Persons completely unrelated to the incident were also captured. However some of them were let off.[6] The government appointed Jagat Narain Mulla as public prosecuter at an incredible fee. Dr Harkaran Nath Mishra (Barrister M.L.A.) and Dr. Mohan Lal Saxena (M.L.C.) were appointed as defence councellers. The defence committee was also formed to defend the accused.[7] Govind Ballabh Pant, Chandra Bhanu Gupta and Kripa Shankar Hajela defended their case. The men were found guilty and subsequent appeals failed. On 16 September 1927, a final appeal for clemency was forwarded to the Privy Council in London but that also failed.

Bismil's body was taken to the Rapti river for a Hindu cremation, and the site became known as Rajghat.[citation needed]

Bismil was known for his poems that acted as motivation for his fellow revolutionaries. Among them, Sarfaroshi Ki Tamanna is the most well-known.[citation needed]

He had also published a pamphlet titled Deshvasiyon ke nam sandesh (en: A message to my countrymen. While living underground, he translated some of Bengali books viz. Bolshevikon Ki Kartoot (en: The Bolshevik's programme) and Yogik Sadhan (of Arvind Ghosh). Beside these a collection of poems Man Ki Lahar (en: A sally of mind) and Swadeshi Rang was also written by him. Another Swadhinta ki devi: Catherine was fabricated from an English book[8] into Hindi. All of these were published by him in Sushil Mala series. Bismil wrote his autobiography while he was kept as condemned prisoner in Gorakhpur jail.[citation needed]

The autobiography of Ram Prasad Bismil was published under the cover title of Kakori ke shaheed by Ganesh Shankar Vidyarthi in 1928 from Pratap Press, Kanpur. A rough translation of this book was got prepared by the Criminal Investigation Department of United Province in British India. Translated book was circulated as confidential document for official and police use throughout the country.[9] 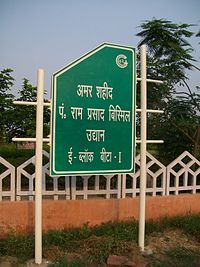 Shaheed Smarak Samiti of Shahjahanpur established a memorial at Khirni Bagh mohalla of Shahjahanpur city where Bismil was born in 1897 and named it "Amar Shaheed Ram Prasad Bismil Smarak". A statue made of white marble was inaugurated by the then Governor of Uttar Pradesh Motilal Vora on 18 December 1994 on the eve of the martyr's 69th death anniversary.[citation needed]

There is a memorial to the Kakori conspiracists at Kakori itself. It was inaugurated by the former Prime Minister of India Indira Gandhi on 19 December 1983.[11]

The government of Uttar Pradesh had named a park after him: Amar Shaheed Pt. Ram Prasad Bismil Udyan is near Rampur Jagir village, where Bismil lived underground after the Mainpuri conspiracy case in 1919.[13]