Raman scattering or the Raman effect /ˈrɑːmən/ is the inelastic scattering of a photon. It was discovered by C. V. Raman and K. S. Krishnan in liquids,[1] and by G. Landsberg and L. I. Mandelstam in crystals.[2] The effect had been predicted theoretically by Adolf Smekal in 1923.[3]

The inelastic scattering of light was predicted by Adolf Smekal in 1923[3] (and in German-language literature it may be referred to as the Smekal-Raman effect[5]). In 1922, Indian physicist C. V. Raman published his work on the "Molecular Diffraction of Light," the first of a series of investigations with his collaborators that ultimately led to his discovery (on 28 February 1928) of the radiation effect that bears his name. The Raman effect was first reported by C. V. Raman and K. S. Krishnan,[1] and independently by Grigory Landsberg and Leonid Mandelstam, on 21 February 1928 (that is why in the former Soviet Union the priority of Raman was always disputed; thus in Russian scientific literature this effect is usually referred to as "combination scattering" or "combinatory scattering"). Raman received the Nobel Prize in 1930 for his work on the scattering of light.[6]

In 1998 the Raman effect was designated a National Historic Chemical Landmark by the American Chemical Society in recognition of its significance as a tool for analyzing the composition of liquids, gases, and solids.[7]

The frequencies of molecular vibrations range from less than 1012 to approximately 1014 Hz. These frequencies correspond to radiation in the infrared (IR) region of the electromagnetic spectrum. At any given instant, each molecule in a sample has a certain amount of vibrational energy. However, the amount of vibrational energy that a molecule has continually changes due to collisions and other interactions with other molecules in the sample.

At room temperature, most of the molecules will be in the lowest energy state, which is known as the ground state. A few molecules will be in higher energy states, which are known as excited states. The fraction of molecules occupying a given vibrational mode at a given temperature can be calculated using the Boltzmann distribution. Performing such a calculation shows that, for relatively low temperatures (such as those used for most routine spectroscopy), most of the molecules occupy the ground vibrational state. Such a molecule can be excited to a higher vibrational mode through the direct absorption of a photon of the appropriate energy. This is the mechanism by which IR spectroscopy operates: infrared radiation is passed through the sample, and the intensity of the transmitted light is compared with that of the incident light. A reduction in intensity at a given wavelength of light indicates the absorption of energy by a vibrational transition. The energy,

is Planck’s constant and

When the polarization in the molecules couples to a vibrational state that is higher in energy than the state they started in, then the original photon and the scattered photon differ in energy by the amount required to vibrationally excite the molecule. In perturbation theory, the Raman effect corresponds to the absorption and subsequent emission of a photon via an intermediate quantum state of a material. The intermediate state can be either a "real", i.e., stationary state or a virtual state. 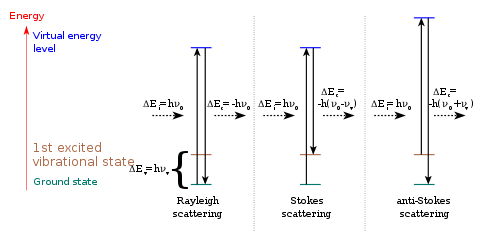 The spectrum of the scattered photons is termed the Raman spectrum. It shows the intensity of the scattered light as a function of its frequency difference Δν to the incident photons. The locations of corresponding Stokes and anti-Stokes peaks form a symmetric pattern around Δν=0. The frequency shifts are symmetric because they correspond to the energy difference between the same upper and lower resonant states. The intensities of the pairs of features will typically differ, though. They depend on the populations of the initial states of the material, which in turn depend on the temperature. In thermodynamic equilibrium, the upper state will be less populated than the lower state. Therefore, the rate of transitions from the lower to the upper state (Stokes transitions) will be higher than in the opposite direction (anti-Stokes transitions). Correspondingly, Stokes scattering peaks are stronger than anti-Stokes scattering peaks. Their ratio depends on the temperature (which can practically be exploited for the measurement of temperature).

The Raman effect differs from the process of fluorescence. For the latter, the incident light is completely absorbed and the system is transferred to an excited state from which it can go to various lower states only after a certain resonance lifetime. The result of both processes is in essence the same: A photon with a frequency different from that of the incident photon is produced and the molecule is brought to a higher or lower energy level. But the major difference is that the Raman effect can take place for any frequency of incident light. In contrast to the fluorescence effect, the Raman effect is therefore not a resonant effect. In practice, this means that a fluorescence peak is anchored at a specific frequency, whereas a Raman peak maintains a constant separation from the excitation frequency.

The distortion of a molecule in an electric field, and therefore the vibrational Raman cross section, is determined by its polarizability. A Raman transition from one state to another, and therefore a Raman shift, can be activated optically only in the presence of non-zero polarizability derivative with respect to the normal coordinate (that is, the vibration or rotation):

. Stokes and Anti-Stokes lines only arise if the polarizability changes during the vibration, i.e.

. Raman-active vibrations/rotations can be identified by using almost any textbook that treats quantum mechanics or group theory for chemistry. Then, Raman-active modes can be found for molecules or crystals that show symmetry by using the appropriate character table for that symmetry group.

The Raman-scattering process as described above takes place spontaneously; i.e., in random time intervals, one of the many incoming photons is scattered by the material. This process is thus called spontaneous Raman scattering.

Stimulated Raman scattering is a nonlinear-optical effect. It can be described using a third-order nonlinear susceptibility

Suppose that the distance between two points A and B of an exciting beam is x. Generally, as the exciting frequency is not equal to the scattered Raman frequency, the corresponding relative wavelengths λ and λ' are not equal. Thus, a phase-shift Θ = 2πx(1/λ − 1/λ') appears. For Θ = π, the scattered amplitudes are opposite, so that the Raman scattered beam remains weak.

- A crossing of the beams may limit the path x.

Several tricks may be used to get a larger amplitude:

- In an optically anisotropic crystal, a light ray may have two modes of propagation with different polarizations and different indices of refraction. If energy may be transferred between these modes by a quadrupolar (Raman) resonance, phases remain coherent along the whole path, transfer of energy may be large. It is an Optical parametric generation.

- Light may be pulsed, so that beats do not appear.

It is the Impulsive Stimulated Raman Scattering (ISRS),[8][9][10][11][12] in which the length of the pulses must be shorter than all relevant time constants.[13] Interference of Raman and incident lights is too short to allow beats, so that it produces a frequency shift roughly, in best conditions, inversely proportional to cube of length of pulses. In labs, femtosecond laser pulses must be used because the ISRS becomes very weak if the pulses are too long. Thus ISRS cannot be observed using nanosecond pulses making ordinary time-incoherent light.

Raman spectroscopy employs the Raman effect for substances analysis. The spectrum of the Raman-scattered light depends on the molecular constituents present and their state, allowing the spectrum to be used for material identification and analysis. Raman spectroscopy is used to analyze a wide range of materials, including gases, liquids, and solids. Highly complex materials such as biological organisms and human tissue[14] can also be analyzed by Raman spectroscopy.

For solid materials, Raman scattering is used as a tool to detect high-frequency phonon and magnon excitations.

Raman lidar is used in atmospheric physics to measure the atmospheric extinction coefficient and the water vapour vertical distribution.

Raman spectroscopy can be used to determine the force constant and bond length for molecules that do not have an infrared absorption spectrum.

For high-intensity continuous wave (CW) lasers, SRS can be used to produce broad bandwidth spectra. This process can also be seen as a special case of four-wave mixing, wherein the frequencies of the two incident photons are equal and the emitted spectra are found in two bands separated from the incident light by the phonon energies. The initial Raman spectrum is built up with spontaneous emission and is amplified later on. At high pumping levels in long fibers, higher-order Raman spectra can be generated by using the Raman spectrum as a new starting point, thereby building a chain of new spectra with decreasing amplitude. The disadvantage of intrinsic noise due to the initial spontaneous process can be overcome by seeding a spectrum at the beginning, or even using a feedback loop as in a resonator to stabilize the process. Since this technology easily fits into the fast evolving fiber laser field and there is demand for transversal coherent high-intensity light sources (i.e., broadband telecommunication, imaging applications), Raman amplification and spectrum generation might be widely used in the near-future.