Usermaatre Sekheperenre Ramesses V (also written Ramses and Rameses) was the fourth pharaoh of the Twentieth dynasty of Egypt and was the son of Ramesses IV and Queen Duatentopet.

His reign was characterized by the continued growth of the power of the priesthood of Amun, which controlled much of the temple land in the country and state finances at the expense of Pharaoh. The Turin 1887 papyrus records a financial scandal during his reign that involved the priests of Elephantine. A period of domestic instability also afflicted his reign since Turin Papyrus Cat. 2044 states that the workmen of Deir el-Medina periodically stopped work on Ramesses V's KV9 tomb in this king's first regnal year out of fear of "the enemy", presumably Libyan raiding parties, who had reached the town of Per-Nebyt and "burnt its people."[1] Another incursion by these raiders into Thebes is recorded a few days later.[2] This shows that the Egyptian state was having difficulties ensuring the security of its own elite tomb workers, let alone the general populace, during this troubled time.

The great Wilbour Papyrus, dating to Year 4 of his reign, was a major land survey and tax assessment document which covered various lands "extending from near Crocodilopolis (Medinet el-Fayyum) southwards to a little short of the modern town of El-Minya, a distance of some 90 miles."[3] It reveals most of Egypt's land was controlled by the Amun temples which also directed the country's finances. The document highlights the increasing power of the High Priest of Amun Ramessesnakht whose son, a certain Usimare'nakhte, held the office of chief tax master.

The circumstances of Ramesses V's death are unknown but it is believed he had a reign of almost 4 full years. It is possible he was dethroned by his successor, Ramesses VI because Ramesses VI usurped his predecessor's KV9 tomb.[4] An ostracon records that this king was only buried in Year 2 of Ramesses VI which was highly irregular since Egyptian tradition required a king to be mummified and buried precisely 70 days into the reign of his successor.[5] 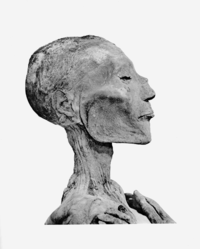 However, another reason for the much delayed burial of Ramesses V in Year 2, second month of Akhet day 1 of Ramesses VI's reign (see KRI, VI, 343) may have been connected with Ramesses VI's need "to clear out any Libyans [invaders] from Thebes and to provide a temporary tomb for Ramesses V until plans for a double burial within tomb KV9 could be put into effect."[2] Moreover, a Theban work journal (P. Turin 1923) dated to Year 2 of Ramesses VI's reign shows that a period of normality had returned to the Theban West Bank by this time.[2]

The mummy of Ramesses V was recovered in 1898 and seems to indicate that he suffered from smallpox due to lesions found on his face and this is thought to have caused his death. He is thought to be one of the earliest known victims of variola.[6] [7]