From Infogalactic: the planetary knowledge core
(Redirected from Ramkhamhaeng the Great)
Jump to: navigation, search
For other uses, see Ram Khamhaeng (disambiguation).

King Ram Khamhaeng (Thai: พ่อขุนรามคำแหง; rtgs: Pho Khun Ram Khamhaeng; c. 1237/1247 – 1298) was the third king of the Phra Ruang dynasty, ruling the Sukhothai Kingdom (a forerunner of the modern kingdom of Thailand) from 1279–1298, during its most prosperous era. He is credited with the creation of the Thai alphabet and the firm establishment of Theravada Buddhism as the state religion of the kingdom.[1]:197[2]:25 Recent scholarship has cast doubt on his role, however, noting that much of the information relating to his rule may have been fabricated in the 19th century in order to legitimize the Siamese state in the face of colonial threats.[3]

Ramkhamhaeng was a son of Prince Bang Klang Hao, who ruled as King Sri Indraditya, and his Queen, Sueang,[4] though folk legend claims his real parents were an ogress named Kangli and a fisherman.[5]:23 He had two brothers and two sisters. The eldest brother died while very young. The second, Ban Muang, became king following their father's death, and was succeeded by Ram Khamhaeng on his own death.[6]

At age 19, Prince Ram Khamhaeng participated in his father's successful invasion of the city of Sukhothai, formerly a vassal of the Khmer, establishing the independent Sukhothai Kingdom. Due to his courage in the war, he allegedly was given the title "Phra Rama Khamhaeng" (Rama the Strong),[1]:196 though he is recorded in the Ayyutthaya Chronicles as King "Ramaraj". After his father's death, his brother Ban Muang ruled the kingdom, assigning Prince Ram Khamhaeng control of the city of Si Sat Chanalai.

The Royal Institute of Thailand speculates that Prince Ram Khamhaeng's birth name was "Ram" (derived from the name of the Hindu epic Ramayana's hero Rama), for his name following his coronation was "Pho Khun Ramarat" (Thai: พ่อขุนรามราช). Furthermore, the tradition at the time was to give the name of a grandfather to a grandson; according to the 11th Stone Inscription and Luang Prasoet Aksoranit's Ayutthaya Chronicles, Ram Khamhaeng had a grandson named "Phraya Ram", and two grandsons of Phraya Ram were named "Phraya Ban Muang" and "Phraya Ram".

Historian Tri Amattayakun (Thai: ตรี อมาตยกุล) suggests that Ram Khamhaeng should have acceded to the throne in 1279, the year he planted a sugar palm tree in Sukhothai City. Prasoet Na Nakhon of the Royal Institute speculates that this was in a tradition of Thai-Ahom's monarchs, who planted banyan or sugar palm trees on their coronation day in the hope that their reign would achieve the same stature as the tree. The most significant event at the beginning of his reign, however, was the elopement of one of his daughters with the captain of the palace guards, a commoner who founded the Ramanya Kingdom and commissioned compilation of the Code of Wareru, which provided a basis for the law of Thailand used in Siam until 1908,[7] and in Burma to the present.[8][9]

Ram Khamhaeng sent embassies to the Yuan Dynasty of the Mongol Empire from 1282 to 1323, and imported the techniques to make the ceramics now known as Sangkhalok ware. He had close relationships with the rulers of nearby city-states, especially Ngam Muang, the ruler of neighboring Phayao (whose wife, according to legend, he seduced), and King Mangrai of Chiang Mai.[1]:206 According to current Thai national history, Ram Khamhaeng expanded his kingdom as far as Lampang, Phrae, and Nan in the north, and Phitsanulok and Vientiane in the east, the Mon states of Burma in the west, the Gulf of Bengal in the northwest, and Nakhon Si Thammarat in the south. However, in the Mandala Southeast Asian political model, as historian Thongchai Winichakul notes, kingdoms such as Sukhothai lacked distinct borders, instead being centered on the strength of the capital itself.[10] Claims of Ram Khamhaeng's large kingdom were, according to Thongchai, intended to assert Siamese dominance over mainland Southeast Asia.[10] His campaign against Cambodia left the Khmer country "utterly devastated".[11]:90

According to conventional Thai history, Ram Khamhaeng developed the Thai alphabet (Lai Sue Thai) from Sanskrit, Pali, and the Grantha script. His rule is often cited by supporters of the Thai monarchy as evidence of a "benevolent monarchy" that exists even today.[12]

According to the Chinese chronicle, History of the Yuan, King Ram Khamhaeng died by 1299 and was succeeded by his son, Loethai, though George Coedes thinks it "more probable" it was "shortly before 1318". Legend states he disappeared in the rapids of the rivers of Sawankhalok.[1]:218–219

Ramkhamhaeng University, the first open university in Thailand with campuses throughout the country, was named after King Ram Khamhaeng the Great. 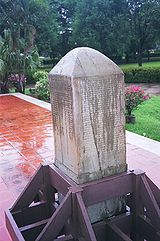 Copy of Ramkhamhaeng stele in the Sukhothai Historical Park

Much of the traditional biographical information comes from the inscription on the Ram Khamhaeng stele, composed in 1292,[1]:196–198 and now in the National Museum in Bangkok. The formal name of the stele is the King Ram Khamhaeng Inscription. It was added to the Memory of the World Register in 2003 by UNESCO.

The stone allegedly was discovered in 1833 by King Mongkut, at the time a Buddhist monk, in Wat Mahathat. The authenticity of the stone – or at least portions of it – has been called into question.[13] Piriya Krairiksh, an academic at the Thai Khadi Research institute, notes that the stele's treatment of vowels suggests that its creators had been influenced by European alphabet systems. He concluded that the stele was fabricated by someone during the reign of King Mongkut or shortly before. The subject is controversial, since if the stone is a fake, the entire history of the period will have to be re-written.[14]

Scholars are sharply divided on the stele's authenticity.[3] It remains an anomaly amongst contemporary writings, and no other source refers to King Ram Khamhaeng by name. Some scholars claim the inscription was completely a 19th century fabrication; others claim the first 17 lines are genuine; while a third view is that the inscription was fabricated by King Lithai (a later Sukhothai king). Most Thai scholars hold to the inscription's authenticity.[3] The inscription and its image of a Sukhothai utopia remain central to Thai nationalism, and the suggestion it may have been faked caused Michael Wright, an expatriate British scholar, to be threatened with deportation under Thailand's lèse majesté laws.[15]

King Ram Khamhaeng is credited with bringing the skills of ceramic making from China and laying the foundation of a strong ceramic ware industry in the Sukhothai Kingdom.[1]:206–207 Sukhothai for centuries was the major exporter of the ceramics known as "Sawankalok ware (เครื่องสังคโลก)" to countries such as Japan, the Philippines, Indonesia, and even to China. The industry was one of the main revenue generators during his reign and long afterwards.

King Ram Khamhaeng is a playable ruler for the Siamese in Civilization 5.