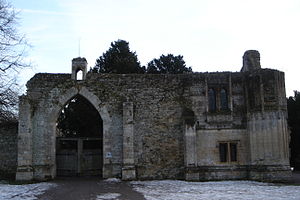 Gatehouse of the abbey, 15th century, with ornate oriel window

Ramsey Abbey was founded in 969 by Saint Oswald, Bishop of Worcester through the gift of a local magnate, Æthelwine. The foundation was part of the mid-10th century monastic revival (when Ely and Peterborough were also refounded). It paid 4000 eels yearly in Lent to Peterborough Abbey for access to its quarries of Barnack limestone.

A Prior and twelve monks formed the original foundation. The Abbey itself was then situated on a peninsula of gravel, known as Bodsey Island, with the impassable fen to three sides. The chapel was replaced by a large, stone-built church over the next five years and thus remained until the Norman Abbot created a much grander project in the 12th century. It was thought to have been founded by Earl Ailwyn (Æthelwine), an effigy of whom is thought to be within the Abbey dating from 1230.

Considerable damage was inflicted upon the Abbey by Geoffrey de Mandeville in 1143; he expelled the monks and used the buildings as a fortress.

File:Ramsey.Psalter.1310.jpg
This Ramsey Psalter of c1310 was a gift to the abbot from the cellarer (facsimile)

In the order of precedence for abbots in Parliament, Ramsey was third after Glastonbury and St Alban's.[1]

In 1737 the abbey was bought by Coulson Fellowes, MP for Huntingdonshire from 1741 to 1761. It passed down through several generations of Fellowes, who became the Barons de Ramsey, during which time the house was substantially enlarged. In 1931 the family moved their seat to Abbots Ripton Hall at the coming of age of the 4th Baron and in 1937 leased the building for 99 years to Ramsey Abbey School. In 1952 they donated the gatehouse to the National Trust, who allow it to used as part of the school.[2] 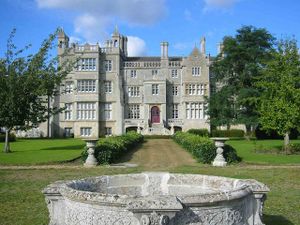 Ramsey Abbey House, the Gatehouse, Almshouses and the parish church can still be seen.[3]

Ramsey Abbey House, the former 17th century home of Sir Henry Cromwell and latterly the seat of the Fellowes family, is currently used by Abbey College to house 6th form facilities and to accommodate lessons.

The Abbey Gatehouse is a National Trust property.[4] Part of the gatehouse was removed by the son and heir of Sir Richard (Sir Henry Williams (alias Cromwell)) to form the main gateway to Hinchingbrooke House in Huntingdon, his newly built winter residence.[5] Today, what remains of the gatehouse also forms a part of the college.[lower-alpha 1]

The town's parish church of St Thomas Becket was built ca. 1180-90 as a hospital, infirmary or guesthouse of the abbey. It was originally an aisled hall with a chapel at the east end with a vestry on the north side and the warden's lodgings on the south, but both these have been demolished. The building became the parish church ca. 1222.

When Whittlesey Mere was being drained, a thurible and other silver items were found in the bed of the mere and from the ram's head on one of these pieces were believed to have come from the Abbey.[6] The thurible (or censer),[7] and an incense boat[8] are now in the Victoria & Albert Museum. Also found in the bed were blocks of quarried stone,[9] which are supposed to have fallen from a barge on the way to the Abbey.