The Rance Tidal Power Station is a tidal power station located on the estuary of the Rance River in Brittany, France.

Opened in 1966 as the world's first[1] tidal power station, it is currently operated by Électricité de France and was for 45 years the largest tidal power station in the world by installed capacity until the South Korean Sihwa Lake Tidal Power Station surpassed it in 2011[citation needed].

Its 24 turbines reach peak output at 240 megawatts and average 62 megawatts, a capacity factor of approximately 26%. At an annual output of approximately 540 GWh, it supplies 0.12% of the power demand of France. 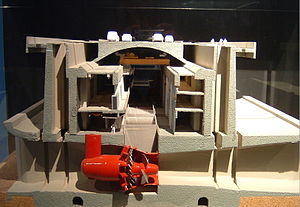 Scale model of the power station 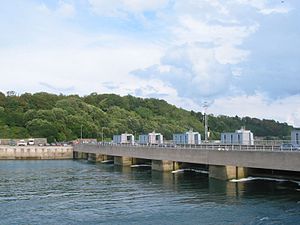 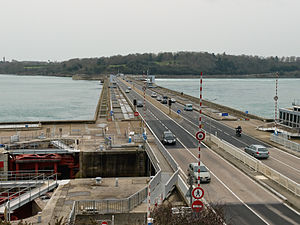 An early attempt to build a tidal power plant was made at Aber Wrac'h in the Finistère in 1925, but due to insufficient finance, it was abandoned in 1930. Plans for this plant served as the draft for follow-on work. Use of tidal energy is not an entirely new concept, since tidal mills have long existed in areas exposed to tides, particularly along the Rance.

The idea of constructing a tidal power plant on the Rance dates to Gerard Boisnoer in 1921. The site was attractive because of the wide average-range between low and high tide levels, 8 m (26 ft) with a maximum perigean spring tide range of 13.5 m (44.3 ft). The first studies which envisaged a tidal plant on the Rance were done by the Society for the Study of Utilization of the Tides in 1943. Nevertheless, work did not actually commence until 1961. Albert Caquot, the visionary engineer, was instrumental in the construction of the dam, designing an enclosure in order to protect the construction site from the ocean tides and the strong streams. Construction necessitated draining the area where the plant was to be built, which required construction of two dams which took two years. Construction of the plant commenced on 20 July 1963, while the Rance was entirely blocked by the two dams.

Construction took three years and was completed in 1966. Charles de Gaulle, then President of France, inaugurated the plant on 26 November of the same year. Inauguration of the route crossing the plant took place on 1 July 1967, and connection of the plant to the French National Power Grid was carried out on 4 December 1967. In total, the plant cost ₣620 million (approximately €94.5 million). It took almost 20 years for the La Rance to pay for itself.

In spite of the high development cost of the project, the costs have now been recovered, and electricity production costs are lower than that of nuclear power generation (1.8c per kWh, versus 2.5c per kWh for nuclear).[citation needed]

The barrage has caused progressive silting of the Rance ecosystem. Sand-eels and plaice have disappeared, though sea bass and cuttlefish have returned to the river. By definition, tides still flow in the estuary and the operators, EDF endeavours to adjust their level to minimize the biological impact.

The facility attracted approximately 40,000 visitors in 2011. A canal lock in the west end of the dam permits the passage of 16,000 tonne vessels between the English Channel and the Rance. Departmental highway 168 crosses the dam and allows vehicles to travel between Dinard and Saint-Malo. There is a drawbridge where the road crosses the lock which may be raised to allow larger vessels to pass.