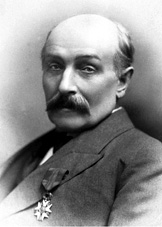 Cremer was born to a working-class family in the southern English town of Fareham. His father was a coachman but abandoned the family soon after Randal was born. His mother raised Cremer along with his two sisters, ensuring Randal received an education at a local Methodist school. Randal augmented his knowledge by attending free lectures. The young Cremer was apprenticed as a builder, soon developing into a skilled carpenter.

Moving to London 1852, Cremer became active as a union organiser, swiftly becoming a recognized labour leader. Cremer was elected as the Secretary of the International Workingmen's Association in 1865, but resigned two years later in 1867 as he felt the organisation was becoming too radical. While heavily involved in campaigning for progressive causes, and respected by Marx, Cremer did not agree with a worker led revolution.[2]

Role in the international arbitration movement

From as early as his first unsuccessful run for Parliament in 1868, Cremer had advocated the expansion of international arbitration as peaceful alternative to war for the resolution of disputes.[2]

He was elected as Liberal Member of Parliament (MP) for Haggerston in the Shoreditch district of Hackney from 1885 to 1895, and from 1900 until his death, from pneumonia in 1908.

Using his platform as an MP, Cremer cultivated allies on both continental Europe and across the Atlantic, including Frédéric Passy, William Jennings Bryan and Andrew Carnegie. Using his network of contacts and his talent for organisation, Cremer did much to create and expand institutions for international arbitration, which during his lifetime were successful in peacefully resolving numerous international disputes. This work includes co-founding the Inter-Parliamentary Union and the International Arbitration League; gaining acceptance for the 1897 Anglo-American arbitration treaty; and preparing the ground for the Hague peace conferences of 1899 and 1907.[2]

In recognition of his work in the arbitration movement, Cremer won the Nobel Peace Prize, the first to do so solo, in 1903.

He also was named a Chevalier of the French Légion d'honneur,[3] won the Norwegian Knighthood of Saint Olaf and was knighted in 1907.

Randal Cremer Primary School, in Haggerston,[4] is named in his honour.