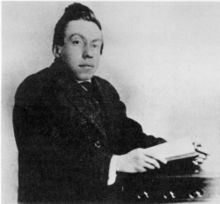 Randolph Silliman Bourne (May 30, 1886 – December 22, 1918) was a progressive writer and "leftist intellectual"[1] born in Bloomfield, New Jersey, and a graduate of Columbia University. Bourne is best known for his essays, especially his unfinished work "The State," discovered after his death.

Bourne's face was deformed at birth by misused forceps, and, at age four, he suffered tuberculosis of the spine, resulting in stunted growth and a hunched back. He chronicled his experiences in his essay titled, "The Handicapped." Bourne's articles appeared in journals including The Seven Arts and The New Republic.

World War I divided American progressives, pitting an anti-war faction, including Bourne and Jane Addams, against a pro-war faction led by pragmatist philosopher and educational theorist John Dewey. Bourne was a student of Dewey at Columbia but rejected Dewey's idea of using the war to spread democracy. In his pointedly titled 1917 essay "Twilight of Idols", he invoked the progressive pragmatism of Dewey's contemporary William James to argue that America was using democracy as an end to justify the war, but that democracy itself was never examined. Although initially following Dewey, he felt that Dewey had betrayed his democratic ideals by focusing only on the facade of a democratic government rather than on the ideas behind democracy that Dewey had once professed to respect.

Bourne was greatly influenced by Horace Kallen's 1915 essay "Democracy Versus the Melting-Pot" and argued, like Kallen, that Americanism ought not to be associated with Anglo-Saxonism. In his 1916 article "Trans-National America," Bourne argued that the US should accommodate immigrant cultures into a "cosmopolitan America," instead of forcing immigrants to assimilate to Anglophilic culture.

Bourne died in the Spanish flu pandemic after the war. His ideas have been influential in the shaping of postmodern ideas of cosmopolitanism and multiculturalism, and recent intellectuals such as David Hollinger have written extensively on Bourne's ideology. John Dos Passos, an influential American modernist writer, eulogized Bourne in the chapter "Randolph Bourne" of his novel 1919 and drew heavily on the ideas presented in War Is The Health of the State in the novel.

In this article, Bourne rejects the melting-pot theory and does not see immigrants assimilating easily to another culture.[2]:248 Bourne's view of nationality was related to the connection between a person and their “spiritual country”,[3]:76 that is, their culture. He argued that people would most often hold tightly to the literature and culture of their native country even if they lived in another. He also believed this was true for the many immigrants to the United States. Therefore, Bourne could not see immigrants from all different parts of the world assimilating to the Anglo-Saxon traditions, which were viewed as American traditions.

This article goes on to say that America offers a unique liberty of opportunity and can still offer traditional isolation, which he felt could lead to a cosmopolitan enterprise.[2]:262 He felt that with this great mix of cultures and people, America would be able to grow into a Trans-National nation, which would have interconnecting cultural fibers with other countries. Bourne felt America would grow more as a country by broadening people's views to include immigrants' ways instead of conforming everyone to the melting-pot ideal. This broadening of people's views would eventually lead to a nation where all who live in it are united, which would inevitably pull the country towards greatness. This article and most of the ideas in it were influenced by World War I, during which the article was written.[2]:264

The Randolph Bourne Institute seeks to honor his memory by promoting a non-interventionist foreign policy for the United States as the best way of fostering a peaceful, more prosperous world. It publishes the website Antiwar.com.