Randolph Adolphus Turpin (7 June 1928 – 17 May 1966), better known as Randolph Turpin, and in the United States also as Randy Turpin, was an English boxer who was considered by some to be Europe's best middleweight boxer of the 1940s and 1950s. In 1951 he became world middleweight champion when he defeated Sugar Ray Robinson. Turpin was inducted into the International Boxing Hall Of Fame in 2001. 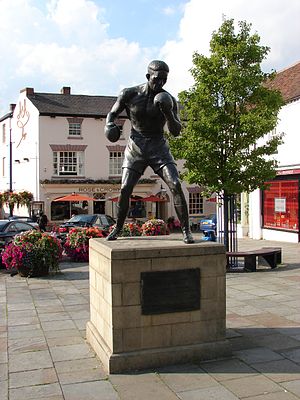 Born in Leamington Spa, Warwickshire, to a black father Lionel who was born in British Guyana in 1886, and died within a year of Randolph's birth, having never recovered from injuries suffered in a gas attack during the battle of the Somme, leaving his mother Beatrice (née Whitehouse, 1904–1974), to raise four children. He started, like his brother Dick, to be trained in the art of boxing at Leamington Boys' Club.[1]

Turpin turned professional in London in 1946, soon after his 18th birthday. Trained by his elder brother Dick, who himself was a successful middleweight, Randolph knocked out Gordon Griffiths in his first bout. Turpin put together a string of 16 wins in a row, all over the United Kingdom, until drawing with Mark Hart over six rounds in his last bout of 1947.

Three wins later, he found himself facing Albert Finch who inflicted on Turpin his first defeat, an 8-round-decision loss. After one more win he lost again, knocked out in five rounds by Jean Stock in London.

Turpin was determined not to lose again after the Stock defeat, and put together another string of wins which reached 12 (including a four-round disqualification win against William Poli). Rematched with Finch, this time with the British middleweight title on the line, Turpin avenged his first loss and won his first championship by knocking out Finch in five rounds on 17 October 1950 at Harringay Arena.

Three more wins followed, including a disqualification win in eight rounds against important challenger Tommy Yarosz. He then met European middleweight champion Luc Van Dam in London, whom he knocked out in the first round to seize the European championship.

Four wins followed after that, including a rematch with Stock, against whom he avenged his second defeat, knocking him out in five rounds. Then world middleweight champion Sugar Ray Robinson travelled to London and, on 10 July 1951, risked his title against Turpin, who won the world title by beating Robinson on a 15-round decision.

Turpin became an instant national hero.[2] His win over Robinson gave him such celebrity that even many people who were not boxing fans knew who he was. When he signed for a rematch with Robinson and chose Gwrych Castle near Abergele in North Wales to train, the castle was constantly hounded by fans and tourists.[1]

His days as a world champion did not last long, however, and when he made his first trip outside his homeland for a fight, he lost his crown to Robinson by a tenth-round TKO with eight seconds left in the round at the Polo Grounds in New York on 12 September 1951.

This turned out to be the beginning of Turpin's problems, because he would begin to miss the sweet life that being a world boxing champion gave him.

He tried to regain his former status and, three fights later, beat Don Cockell in 11 rounds by a knockout to win the British Commonwealth light-heavyweight title.

Turpin went back down in weight, and beat Georges Angelo to regain his British middleweight title, and put on another string of wins, leading to his challenge of Bobo Olson for the world middleweight title that Robinson had left vacant after retiring. His second trip to New York turned into another 15-round defeat, this time at the hands of Olson.

In 1954, he went to Rome where he lost his European middleweight title by a knockout in the first round to Tiberio Mitri.

He kept trying mightily as he could to regain his former condition as a world champion and even retained his British middleweight title a few times in his next ten fights, but he lost two of them to obscure opponents.

After that, he managed another winning streak against some obscure boxers, but by 1958 it was clear his best days in boxing were long over. He lost that year to Yolande Pompey, another future world title challenger, by a second-round knockout in Birmingham, and retired in 1959.

In 1962, he began another comeback which lasted for only two fights, both of which he won, the last being held in Malta.

He retired with a record of 66 wins, eight losses and one draw. Of his 66 wins, 48 came by knockout.

By now he was so short of money that he resorted to professional wrestling. His name meant that he drew moderate crowds for a short time, but in the end this venture was not a success because he was a fighter not a showman.

According to articles, reports and a biography, Turpin couldn't deal with the obscurity resulting from the loss of his crown. In Llandudno in Wales, he bought a public house on the Great Orme, which today retains several genuine artefacts from his career. Between 1952 and 1961, he was the registered licensee.[3]

After being declared bankrupt, Turpin committed suicide by shooting himself in 1966. It is reported that, on the same day, he tried to kill his daughter.[4]

On 17 May 1966 he was found dead in his home Gwen's Transport Cafe in Leamington Spa, where he lived with his wife and four daughters, one of his daughters, Carmen aged four, was taken to hospital in Birmingham with two shot wounds.[5]

Turpin was inducted as a member of the International Boxing Hall Of Fame in Canastota, New York in 2001. There is a statue of him in Market Square, Warwick.