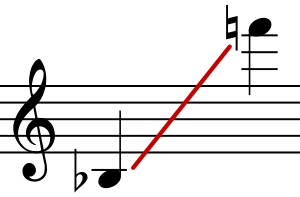 Written range of a Saxophone.

The sounding range[1] refers to the pitches produced by an instrument, while the written range[1] refers to the compass (span) of notes written in the sheet music, where the part is sometimes transposed for convenience. A piccolo, for example, typically has a sounding range one octave higher than its written range.[2] The designated range is the set of notes the player should or can achieve while playing. All instruments have a designated range, and all pitched instruments have a playing range. Timbre, dynamics, and duration ranges are interrelated and one may achieve registral range at the expense of timbre. The designated range is thus the range in which a player is expected to have comfortable control of all aspects.

Classical arrangements seldom make woodwind or brass instruments play beyond their designed range. String musicians play the bottom of their ranges very frequently, but the top of a string instrument's range is rather fuzzy, and it is unusual for a string player to exceed the designated range. It is quite rare for wind musicians to play the extremes of their instruments. The most common exception is that in many 20th century works, pedal tones are called for in bass trombones.

This chart uses standard numberings for octaves where middle C corresponds to C4. In the MIDI language middle C is simply referred to as 'Middle C', which is MIDI note number 60.

*This chart only displays down to C0, though the Octocontrabass clarinet extends down to the B♭−1 below that C. Also some pipe organs, such as the Boardwalk Hall Auditorium Organ, extend down to C−1 (one octave below C0).