"Ranulf of Chester" redirects here. For the other Earls of Chester named Ranulf, see Earl of Chester.

File:Ranulf de Blondeville.jpg
SIGILLUM RANULFI COMITIS CESTRIE ET LINCOLNIE ("Seal of Ranulf Count of Chester and of Lincoln"). His arms of a "garb of wheat" are visible on his shield and on his horse's caparison, and became common as "arms of patronage" borne by the later Cheshire gentry (See e.g. Scrope v Grosvenor)

Ranulf de Blondeville, 6th Earl of Chester and 1st Earl of Lincoln[1] (1170–1232), known in some references as the 4th Earl of Chester (in the second lineage of the title after the original family line was broken after the 2nd Earl), was one of the "old school" of Anglo-Norman barons whose loyalty to the Angevin dynasty was consistent but contingent on the receipt of lucrative favours. He was described as "almost the last relic of the great feudal aristocracy of the Conquest".[2]

Ranulf, born in 1170,[1] was the eldest son of Hugh de Kevelioc and Bertrade de Montfort of Evreux. He was said to have been small in physical stature.

He succeeded to the earldom of Chester (like his father before him) as a minor (aged eleven) and was knighted in 1188 or 1189, which gave him control of his estates in England and Normandy.[1] Although he used, not inconsistently, the style Duke of Brittany, he never had the control of the duchy, and is not known to have played an important role there.[1]

In 1188 or 1189,[1] he was married to the Duchess Constance of Brittany, the widow of Henry II’s son Geoffrey II, Duke of Brittany, and mother of Arthur of Brittany, with whom King John contested the succession to the crown of England. Richard Coeur de Lion, John's brother, had no known legitimate issue. The King had named Arthur of Brittany as his adopted son and heir to the crown of England. Henry did not envy the Duchess and wanted her married to a magnate whom he could trust. The marriage gave Ranulf control of the earldom of Richmond,[1] but it wasn't a success, and they separated.

In 1196, King Richard I of England nominated the nine-year-old Arthur as his heir, and summoned him and his mother, Duchess Constance, to Normandy. Constance left Nantes and travelled towards Rouen. On the way she was abducted by her estranged husband. Richard, furious, marched to Brittany at the head of an army, intent on rescuing his nephew. Arthur was secretly taken away by his tutor to the French court to be brought up with Louis, son of the French king Philip II. In 1199, Constance escaped from her husband and their marriage was dissolved on the grounds of desertion.

In 1200 Ranulf cemented his power in Normandy by marrying Clemence of Fougères; she was the daughter of William of Fougères, widow of Alan de Dinant, and sister of Geoffrey of Fougères. He had opposed John's attempted coup of 1193–4, and retained many contacts with partisans of his former stepson Arthur. He spent most of 1199–1204 in France and his continued loyalty was bought by John with further patronage. However the King was suspicious of the Earl, perhaps with some reason. In the winter of 1204-5, Ranulph, suspected of dealings with the rebellious Welsh and of contemplating revolt himself, had extensive estates temporarily confiscated by the king. This episode apparently convinced Ranulph to show loyalty in future. Thereafter he was showered with royal favours. In return he fought John’s Welsh wars 1209–12; helped secure the peace with the pope in 1213–14, and was with the king in Poitou in 1214.

Loyal to the king in 1215–16, he was one of the few magnates to witness the Magna Carta of 1215. He played a leading military role in the civil war by virtue of his extensive estates and numerous castles. Ranulf stood with William Marshal and the Earls of Derby and Warwick with the King, whilst the other nobility of the land stood with the enemy or remained aloof from the conflict.

Chester was appointed in 1215 Lord of the County of Lancashire with the power to appoint sheriffs.[3] He was also High Sheriff of Lancashire, High Sheriff of Staffordshire and High Sheriff of Shropshire in 1216. On John's death in 1216, Ranulf's influence increased further. There was an expectation at Gloucester that Ranulf would contend the regency for the young Henry III. Events moved quickly at Gloucester, where William Marshal and the young king were, in Ranulph's absence. The Marshal was put forward and offered the regency by the nobility and clerics gathered at Gloucester before the arrival of Ranulph. There was concern that Ranulph might object to the decision, but when he arrived (29 October 1216) he stated that he did not want to be regent, so any potential conflict vanished.

Before John's death, rebel barons had offered the throne of England to Louis, the dauphin. Louis had invaded the country during the summer of 1216 and had taken Winchester. De Blondeville put his political weight behind re-issuing the Magna Carta in 1216 and 1217; his military experience was utilised in defeating the rebels at Lincoln in 1217. Ranulph was based in the north midlands and was charged with stopping the northern barons linking up with Louis in the south.

The Earl chose to combine personal concerns with those of the country by attacking Saer de Quincy, 1st Earl of Winchester's castle at Mountsorrel in Leicestershire – from which the Earl of Winchester's predecessors had ousted Ranulph's grandfather, Ranulf de Gernon. Louis was persuaded by the Earl of Winchester to send a relief force to the castle. When they arrived, de Blondeville and the Royalist force were gone. In fact they had headed to Lincoln to deal with a French force besieging the castle there.

William Marshal with his main army at Northampton also made for the city, and at Lincoln a battle was fought between the Royalists headed by William Marshal and de Blondeville and the French forces and their allies. The battle went in favour of the Royalists, and they captured forty-six Barons and the Earls of Winchester and Hereford and the Earl of Lincoln, recently created by Louis the French King. Following the battle in recognition of his support Ranulf was created Earl of Lincoln by King Henry III of England on 23 May 1217.

In 1218, de Blondeville decided to honour the crusading vow he had made three years previously, and he journeyed eastwards. He met up with the Count of Nevers and the Count of La Marche in Genoa, accompanied by the Earls of Derby, Arundel and Winchester. They then sailed on towards Egypt and the Nile. An icy winter in camp was followed by a burning summer which affected the morale of the crusaders greatly. During September 1219, the Sultan, wary of the conflict outside Damietta, offered the Crusaders a startling bargain – Bethlehem, Nazareth, Jerusalem and central Palastine and Galilee, so long as the Crusaders gave up their war in Egypt. Earl Ranulph was one of many voices in support of taking the offer, and was supported by his English peers. However, Bishop Pelagius, the Patriarch of Jerusalem and the military orders would have none of it. They finally refused the offer and on 5 November they found the walls of Damietta poorly manned, so they attacked and secured the city. When winter came the army was smouldering with discontent. Earl Ranulf left Damietta in September 1220, with his fellow English earls, leaving behind an indecisive force under the command of Bishop Pelagius and the Military Orders. Upon the crusade’s failure he returned to England to find his rival, William Marshal dead and the government in the hands of Hubert de Burgh. 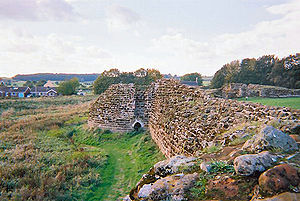 The ruins of Bolingbroke Castle, built by Ranulf

From 1220 to 1224, tensions grew between government officials and old loyalists of King John. This flared into open conflict in the winter of 1223-4 when Ranulf among others briefly tried to resist de Burgh’s policy of resumption of sheriffdoms and royal castles. Ranulf built Bolingbroke Castle near Spilsby in Lincolnshire around 1220, later the birthplace of King Henry IV, as well as Chartley Castle Staffordshire, and Beeston Castle in Cheshire.[4] Ranulf was briefly made castellan of Wallingford Castle. He made an alliance with Llywelyn the Great, whose daughter Elen married Ranulf's nephew and heir, John the Scot, in about 1222.

De Blondeville's final years saw him acting as an elder statesman, witnessing the 1225 re-issue of the Magna Carta, playing a prominent role in the dispute in 1227 over Forest Laws and, as a veteran, leading Henry III’s army on the ill-fated Poitou expedition of 1230-1. He came to lead the campaign after the death of William Marshal (the younger). He showed vigour and made a thrust into Anjou, but by the end of June the French had reached the Breton border. Ranulf concluded the campaign with a truce with the King of France for three years, to end in 1234.

Earl Ranulf kept in sight his personal advantage. In 1220 some of his estates avoided carucage; in 1225 Aid was not levied in Cheshire; and in 1229 he successfully resisted the ecclesiastical tax collector. His only major failure, in old age, was not avoiding the 1232 levy of the fortieth on his lands. 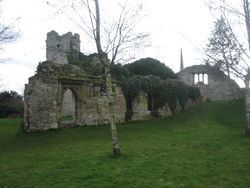 Ranulf died at Wallingford on 26 October 1232,[1] aged sixty. His viscera were buried at Wallingford Castle, his heart at Dieulacres Abbey, which he had founded, and the remainder of his body at St Werburg's in Chester. His various estates were divided between his four sisters Matilda (Maud), Mabel, Agnes (Alice), and Hawise[5] as co-heirs.

Ranulf's second sister Mabel and his eldest sister Matilda (Maud) shared in the estates with their other sisters. Ranulf's third sister Agnes (Alice) inherited, along with a share in other estates with her sisters, lands between the Ribble and the Mercy rivers, Powis Castle near Welshpool in Wales, Chartley Castle, Staffordshire, and land at Bugbrooke, Northamptonshire. Ranulf's youngest sister Hawise inherited the honor and castle of Bolingbroke, other large estates such as Lindsey and Halland in Lincolnshire, and a share of other estates with her sisters.[6][7]

Prior to Ranulf's death, however, he had also made Hawise, his youngest sister an inter vivos gift, after receiving dispensation from the crown, of the Earldom of Lincoln. In April 1231 he granted her the title by a formal charter under his seal which was confirmed by King Henry III. She was formally invested as suo jure 1st Countess of Lincoln on 27 October 1232 the day after Ranulf's death. She held the Earldom of Lincoln until less than a month later with the consent of the King she likewise gifted the Earldom inter vivos to her daughter Margaret de Quincy and her son-in-law John de Lacy, 2nd Earl of Lincoln. They were formally invested by King Henry III as Countess and Earl of Lincoln on 23 November 1232.[8][9]

After his death, his nephew John the Scot (son of his eldest sister Matilda (Maud) of Chester), was formally invested by King Henry III as Earl of Chester[9] on 21 November 1232,[10] which suggest a prior agreement.[1]

As an important figure in the reigns of Richard I and King John, Ranulf appears in novels set in the period.

Ranulf de Blondeville is a supporting character in James Goldman's 1979 novel Myself as Witness set in the reign of King John. Goldman's narrator describes Ranulf as the "only living Visigoth" and condemns him for killing many Welshman in his capacity as an Anglo-Norman lord of the Welsh Marches. He is represented as a brutal and aggressive opponent of all things, and people, Welsh.

He appears early in Sharon Kay Penman's novel Falls the Shadow, on the life and career of Simon de Montfort, 6th Earl of Leicester, when he promises to personally support Simon's appeal to the king to recognise his right to the impoverished Leicester earldom.

Ranulf makes a brief appearance in Lauren Johnson's 2013 novel The Arrow of Sherwood participating at the siege of Nottingham in 1194.

Ranulf is mentioned several times over the course of the 1980s television series Robin of Sherwood.