Rapeseed (Brassica napus), also known as rape,[1] oilseed rape,[1] rapa, rappi, rapaseed (and, in the case of one particular group of cultivars, canola), is a bright-yellow flowering member of the family Brassicaceae (mustard or cabbage family), (油菜: Mandarin Pinyin yóucài; Cantonese:yau choy) consumed in China and Southern Africa as a vegetable. The name derives from the Latin for turnip, rāpa or rāpum, and is first recorded in English at the end of the 14th century. Older writers usually distinguished the turnip and rape by the adjectives 'round' and 'long' (-'rooted'), respectively.[2] Rutabagas, Brassica napobrassica, are sometimes considered a variety of B. napus. Some botanists also include the closely related B. campestris within B. napus.

B. napus is cultivated mainly for its oil-rich seed, the third-largest source of vegetable oil in the world.[3]

This list is from the Germplasm Resources Information Network (GRIN),[1] which attributes the names to other sources: 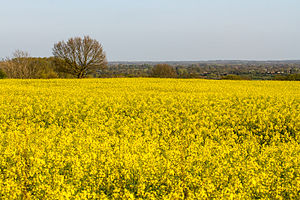 A sea of yellow rapeseed flowers 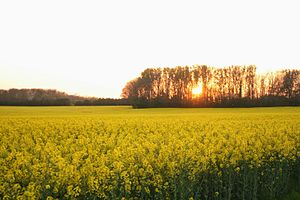 Field of rapeseed in France 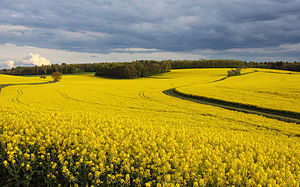 Historically, rapeseed was mainly produced as a source of lubricant for machinery[4] due to its high levels of glucosinolate, a bittering agent which made the oil unpalatable, and erucic acid, a toxic substance associated with cardiac lesions.[5] However, in 1973, Canadian agricultural scientists bred strains of rapeseed sufficiently low in these substances to make the crop palatable and safe for both human and livestock consumption.[6]

Today, rapeseed is grown for the production of animal feeds, edible vegetable oils, and biodiesel; leading producers include the European Union, Canada, China, India, and Australia. In India, 6.7 million tons are produced annually.[7] According to the United States Department of Agriculture, rapeseed was the third-leading source of vegetable oil in the world in 2000, after soybean and palm oil; it was the world's second-leading source of protein meal; it forms one-fifth of the production of the leading soybean meal.[citation needed]

World production is growing rapidly. The FAO reports 36 million tons of rapeseed were produced in the 2003–2004 season, and estimated 58.4 million tons in the 2010–2011 season.[8] In Europe, rapeseed is primarily cultivated for animal feed,[citation needed] owing to its very high lipid and medium protein content.[citation needed] 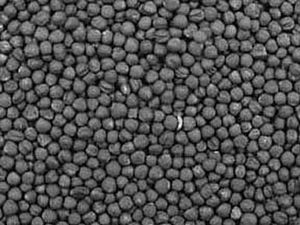 Natural rapeseed oil contains 50% erucic acid. Wild seeds also contain high levels of glucosinolates (mustard oil glucosindes), chemical compounds that significantly lowered the nutritional value of rapeseed press cakes for animal feed. In North America, the term "canola" — a contraction of Canada and ola, for "oil low acid"[9] — came into usage in the 1980s to avoid the linguistic resemblance between the term "rapeseed" and rape. It became widely used to refer to rapeseed, and is now a trade-name for "double low" (low erucic acid and low glucosinolate) rapeseed.[10] The rapeseed is the harvested component of the crop. The crop is also grown as a winter cover crop. The plant is ploughed back in the soil or used as bedding. On some organic operations, livestock such as sheep or cattle are allowed to graze on the plants.

Processing of rapeseed for oil production produces rapeseed meal as a byproduct. The byproduct is a high-protein animal feed, competitive with soybean.[citation needed] The feed is employed mostly for cattle feeding, but also for pigs and chickens. The meal has a low content of the glucosinolates responsible for metabolism disruption in cattle and pigs.[11] Rapeseed "oil cake" is also used as a fertilizer in China, and may also be used for ornamentals, such as bonsai.[citation needed]

Some varieties of rapeseed (called 油菜, yóu cài, "oil vegetable" in Chinese; yau choy in Cantonese; cải dầu in Vietnamese; phak kat kan khao [ผักกาดก้านขาว] in Thai; and nanohana [菜の花]/nabana [菜花] in Japanese) are sold as greens, primarily in Asian groceries, including some in California, where it is known as yao choy or tender greens. They are eaten as saag in Indian and Nepalese cuisine, usually stir-fried with salt, garlic, and spices.

Rapeseed produces great quantities of nectar, and honeybees produce a light-colored but peppery honey from it. It must be extracted immediately after processing is finished, because it will otherwise quickly granulate in the honeycomb and be impossible to extract. The honey is usually blended with milder honeys, if used for table use or sold as bakery grade. Rapeseed growers contract with beekeepers for the pollination of the crop.[citation needed]

"Total loss" chain and bar oil for chainsaws have been developed which are usually 70% or more canola/rapeseed oil, although they are typically more expensive. Some countries, such as Austria, have banned the use of petroleum-based chainsaw oil.[12] These "biolubricants" are generally reported to be functionally comparable to traditional mineral oil products, with some reports claiming one or other is superior,[12] but no consensus is yet evident.

Rapeseed has been researched as a means of containing radionuclides that contaminated the soil after the Chernobyl disaster.[13][14][15] Rapeseed was discovered to have a rate of uptake up to three times more than other grains, and only about 3 to 6% of the radionuclides go into the parts of the plant that could potentially enter the food chain. As oil repels radionuclides, canola oil free from contaminants being concentrated in other parts of the plant could be produced. The rest of the plant (straw, roots, seed pods, etc.) could then be recycled by ploughing back into the soil.[13]

Rapeseed oil is used as diesel fuel, either as biodiesel, straight in heated fuel systems, or blended with petroleum distillates for powering motor vehicles. Biodiesel may be used in pure form in newer engines without engine damage and is frequently combined with fossil-fuel diesel in ratios varying from 2% to 20% biodiesel. Owing to the costs of growing, crushing, and refining rapeseed biodiesel, rapeseed-derived biodiesel from new oil costs more to produce than standard diesel fuel, so diesel fuels are commonly made from the used oil. Rapeseed oil is the preferred oil stock for biodiesel production in most of Europe, accounting for about 80% of the feedstock,[16] partly because rapeseed produces more oil per unit of land area compared to other oil sources, such as soybeans, but primarily because canola oil has a significantly lower gel point than most other vegetable oils.

Rapeseed is currently grown with high levels of nitrogen-containing fertilisers, and the manufacture of these generates N2O. An estimated 3-5% of nitrogen provided as fertilizer for rapeseed is converted to N2O.[17]

Canola was originally a trademark, but is now a generic term in North America for edible varieties of rapeseed oil. In Canada, an official definition of canola is codified in Canadian law. 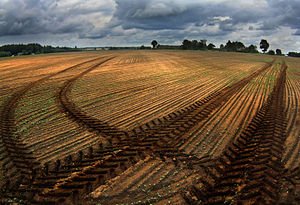 Rapeseed oil had a distinctive taste and a greenish colour due to the presence of chlorophyll.

A variety of rapeseed developed in 1998 is considered to be the most disease- and drought-resistant canola. This and other recent varieties have been produced by using genetic engineering. In 2009, 90% of the rapeseed crops planted in Canada were genetically modified, herbicide-tolerant canola varieties.[18] 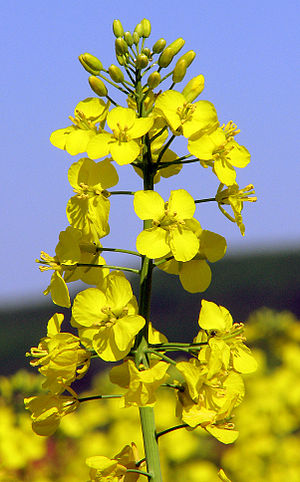 Rapeseed oil is one of the oldest vegetable oils, but historically was used in limited quantities due to high levels of erucic acid, which is damaging to cardiac muscle of animals, and glucosinolates, which made it less nutritious in animal feed.[19] Rapeseed oil can contain up to 54% erucic acid.[20] Food-grade canola oil derived from rapeseed cultivars, also known as rapeseed 00 oil, low erucic acid rapeseed oil, LEAR oil, and rapeseed canola-equivalent oil, has been generally recognized as safe by the United States Food and Drug Administration.[21] Canola oil is limited by government regulation to a maximum of 2% erucic acid by weight in the USA[21] and 5% in the EU,[22] with special regulations for infant food. These low levels of erucic acid are not believed to cause harm in human neonates.[21][22]

In 1981, a deadly outbreak of disease in Spain, known as toxic oil syndrome,[23] was caused by the consumption of colza oil (a cousin of rapeseed oil procured from a similar species of rapa) for industrial use that was fraudulently sold as olive oil to be consumed in cooking, salads, and other foods. Symptoms appeared as a typical pneumonia with interstitial infiltrates on chest X-ray, complicated by pulmonary hypertension in a significant number of cases.[24]

Rapeseed pollen contains known allergens.[25][26] Whether rape pollen causes hay fever has not been well established, because rape is an insect-pollinated (entomophilous) crop, whereas hay fever is usually caused by wind-pollinated plants. The inhalation of oilseed rape dust may cause asthma in agricultural workers.[27]

Worldwide production of rapeseed (including canola) has increased sixfold between 1975 and 2007. The production of canola and rapeseed since 1975 has opened up the edible oil market for rapeseed oil. Since 2002, production of biodiesel has been steadily increasing in EU and USA to 6 million metric tons in 2006. Rapeseed oil is positioned to supply a good portion of the vegetable oils needed to produce that fuel. World production is thus expected to trend further upward between 2005 and 2015 as biodiesel content requirements in Europe go into effect.[28] Every ton of rapeseed yields about 400 kg of oil. Rapeseed oil takes between 135 and 150 days to mature, with some varieties only taking 110.[7] 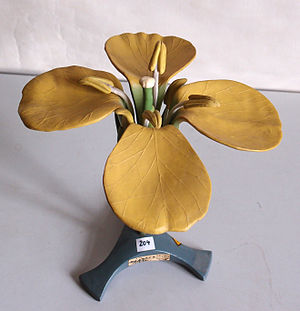 Bayer Cropscience (in collaboration with BGI-Shenzhen, China, Keygene N.V., the Netherlands, and the University of Queensland, Australia) announced it had sequenced the entire genome of B. napus and its constituent genomes present in B. rapa and B. oleracea in 2009. The "A" genome component of the amphidiploid rapeseed species B. napus is currently being sequenced by the Multinational Brassica Genome Project.[31][needs update]

The Monsanto company has genetically engineered (GMO) new cultivars of rapeseed to be resistant to the effects of its herbicide, Roundup. They have sought compensation from farmers found to have the 'Roundup Ready' gene in canola in their fields without paying a license fee. These farmers have claimed the 'Roundup Ready' gene was blown into their fields and crossed with unaltered canola. Other farmers claim, after spraying Roundup in non-canola fields to kill weeds before planting, 'Roundup Ready' volunteers are left behind, causing extra expense to rid their fields of the weeds.

In a closely followed legal battle, the Supreme Court of Canada found in favor of Monsanto's patent infringement claim for unlicensed growing of 'Roundup Ready' in its 2004 ruling on Monsanto Canada Inc. v. Schmeiser. The case garnered international controversy, as a court-sanctioned legitimation for the global patent protection of genetically modified crops. However, Schmeiser was not required to pay damages, as he did not benefit financially from the GMO crop in his field.[citation needed]

In March 2008, an out-of-court settlement between Monsanto and Schmeiser agreed that Monsanto would clean up the entire GMO-canola crop on Schmeiser's farm, at a cost of about $660.[32]