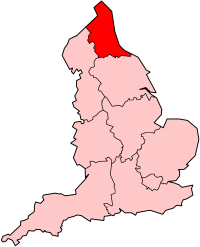 Rapper sword (also known as the "Short Sword" dance) is a variation of sword dance that emerged from the pit villages of Tyneside in North East England, where miners first performed the tradition.[1]

The dance requires five performers who co-ordinate themselves whilst using "rapper swords" made from flexible steel. Accompanied by traditional folk music, the dancers wear specially-designed shoes that allow for percussive foot movements. Mental alertness, in additional to physical agility, is required in order for dance participants to use the swords effictively without causing harm to themselves or the other performers.[2]

Whilst substantial evidence for the origins of the rapper sword tradition does not exist, as of 2012, it is generally accepted that the dance was originally performed in the mining villages of the Northumberland and Durham coalfield in North East England, with an intensity of activity traced to Tyneside. A "hilt-and-point" sword dance also existed in Yorkshire, where rigid longswords were used, and a documented account of this dance has been located in a 1715 article in which a fairly accurate description can be read.[3]

At some stage in the nineteenth century, the rigid swords were replaced by flexible rappers. Very little is known about this major development in the tradition because of an absence of sufficient evidence, and it may have been entirely accidental. It is commonly thought that the flexible version was used for removing dirt from the backs of pit ponies, but there is no available documentation to verify this theory. It seems that two factors have influenced interpretations of when the rapper sword was introduced: firstly, the relocation of a steel works operation by Alistair Crowley to the Derwent Valley, before which time it is believed that suitable steel for flexible swords would most likely have been unavailable; and secondly, the prohibitive expense of such instruments before the Bessemer process in 1855 that allowed steel to be made inexpensively.[4]

The dance involves five people, with many including characters, such as "Tommy and Betty", who announce the dance and engage the audience.[1] The performers are connected by short swords bearing two handles, with the handle on one end being fixed, and the other handle swivelling. The flexible rapper swords form an unbroken chain connecting the dancers. The dance is related to the Long Sword dance of Yorkshire, as well as other sword dances in Europe. Some of the earliest teams used hornpipes rather than the jigs used in the modern era.

During the nineteenth century, teams of rapper dancers from the pit villages of Tyneside, and later Wearside, would travel annually to the towns of Newcastle upon Tyne, Sunderland and Durham to perform the dance for the crowds – asking for monetary consideration. This was later revived as a source of income during the miners' strikes and lay-offs of the Great Depression. 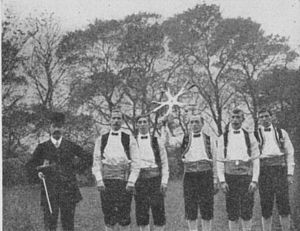 The Royal Earsdon sword dancers in 1910

By the early twentieth century, the tradition was beginning to die out, but was revived by the interest generated after Cecil Sharp published notations for five of the traditional village dances in his book, The Sword Dances of Northern England. After the First World War, the revival was marked by the fierce competition between pit villages in the rapper classes of the newly instituted North of England Musical Tournament held annually in Newcastle upon Tyne.

After the Second World War, the tradition progressively declined in the original pit villages, partly as a result of social changes in the mining communities. However, another revival was initiated after the war by students at Kings College in Newcastle upon Tyne (now the University of Newcastle upon Tyne), which subsequently spread beyond the traditional area. Revival teams worldwide now perform the tradition, sometimes learned from published notations, sometimes taught by rapper dancers in what is almost a continuation of the earlier oral traditions.

The dance has transformed as it moved into the twenty-first century, the pace has quickened and is performed at around 100–160 beats per minute, with different team styles using different rates. It should nonetheless be performed in a smooth and graceful manner, with one figure flowing seamlessly into the next. A number of acrobatic figures can be employed, including forward and backward somersaults over swords.

The dance is now almost always performed to jigs (perhaps 75% of the time), with the normal form of rapper "stepping" being a form of shuffle imported in the 1920s from the local clogging tradition. The jigs used include local tunes and many instruments can, and have been, used to accompany rapper dances, the most popular being fiddles, tin whistles and accordions. Most rapper jigs used for the last hundred years are Irish tunes, probably imported by Irish immigrants to Tyneside in the nineteenth century. The music is usually performed solo although can be performed as a duet; however, rapper is not usually performed to a band.

In modern times the competitive element of rapper sword dancing has been revived in the form of the DERT (Dancing England Rapper Tournament) competition.

The costume in which the dance is usually performed, referred to as the "kit", is a stylised version of the working clothes of the local nineteenth century coal miner (see photograph, left). It consists of shirt, sash, breeches, hoggers (similar to breeches but shorter) or long trousers, and socks or stockings. Some traditional teams decorated their kit with ribbons or rosettes, and added a tie and/or waistcoat.

Modern teams use a variety of kits, mostly based on the traditional costume, with each team using different combinations of colours to try to have a unique corporate image. Some other modern sides, especially women's sides, use very different kits.

The Rapper Online website provides information on the origins and history of the dance, teams listings, and notations of traditional dances. Current and historical information is also available at "The NUT on the Net", the Internet edition of The NUT, the journal of the rapper sword dance.

Leading exponents of the tradition in its traditional area include the "High Spen Blue Diamonds", the "Newcastle Kingsmen", "Monkseaton Morris Men", the "Sallyport Sword Dancers" and "Short Circuit" . The Rapper Online website provides a list of rapper sword teams and the Sword Dance Union has produced a map of current UK teams.

The DERT (Dancing England Rapper Tournament) competition, which is open to all rapper sword teams, is held annually in a different UK city. DERT 2012 was held in London from 30 March to 1 April 2012 (organised by Thrales Rapper), DERT 2013 was in Burton on Trent from March 8 to March 10 (Ryknild Rabble) and DERT 2014 was held in Leeds from March 7 to 9 (Black Swan Rapper). Bristol is the host city for DERT 2015 and is organised by Northgate Rapper, a team from the nearby city of Bath.

Rapper dancing has gained international popularity. Jack The Rapper, based in Norway, attended DERT in 1996, 1999 and 2003. The DERT 2005 and 2006 competitions were attended by three teams from the United States, named Candyrapper (2005), Beside the Point (2006) and Scrambled Six (2007). Red Mum Rapper from Denmark competed in DERTs 2013 and 2014. Pocketflyers (USA) will be attending DERT 2015 in Bristol. Rapper teams also exist in Australia, Germany and the Basque Country of France.