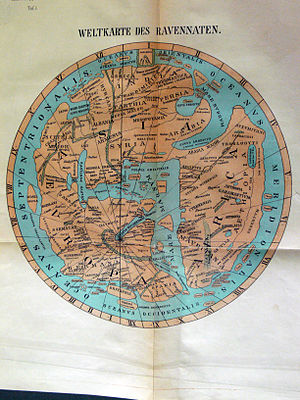 Map based on Ravenna Cosmography

The Ravenna Cosmography (Latin: Ravennatis Anonymi Cosmographia, lit. "The Cosmography of the Unknown Ravennese") is a list of place-names covering the world from India to Ireland, compiled by an anonymous cleric in Ravenna around AD 700. Textual evidence indicates that the author frequently used maps as his source.

The most recent critical edition of the three manuscripts is that of Joseph Schnetz in 1942.[1]

The surviving texts are quite challenging. The three manuscript copies are distanced from the autograph (original manuscript) by three or four generations. As a result, the copies are plagued by errors of spelling, word division, omission, and even errors of hearing. (The text was apparently dictated at one point.). The text-to-text variations are not limited to the place-names, but are also significant in the intervening commentary. Thus, the bulk of the blame cannot be placed on the original author.[citation needed]

Sites dealing with the British section

Sites dealing with the Iberian section