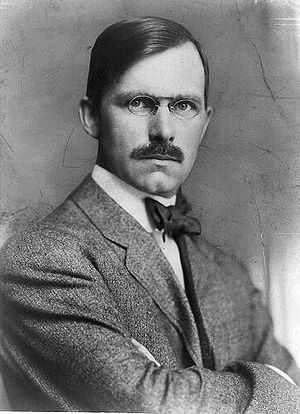 Baker was born in Michigan. After graduating from the State Agricultural College (now Michigan State University), he attended law school at the University of Michigan in 1891 before launching his career as a journalist in 1892 with the Chicago News-Record, where he covered the Pullman Strike and Coxey's Army in 1894.

In 1898[3] Baker joined the staff of McClure's, a pioneer muckraking magazine, and quickly rose to prominence along with Lincoln Steffens and Ida Tarbell. He also dabbled in fiction, writing children's stories for the magazine Youth's Companion and a 9-volume series of stories about rural living in America, the first of which was titled "Adventures in Contentment" (1910) under his pseudonym David Grayson, which reached millions of readers worldwide.

In 1906 dissatisfied with the muckraker label, Baker, Steffens, and Tarbell left McClure's and founded The American Magazine. In 1908 after the 1906 Atlanta Race Riot got him involved, Baker published the book Following the Color Line: An Account of Negro Citizenship in the American Democracy, becoming the first prominent journalist to examine America's racial divide; it was extremely successful. He would continue that work with numerous articles in the following decade.

In 1912 after flirting with Socialism, Baker supported the presidential candidacy of Woodrow Wilson, which led to a close relationship between the two men, and in 1918 Wilson sent Baker to Europe to study the war situation. During peace negotiations, Baker served as Wilson's press secretary at Versailles. He eventually published 15 volumes about Wilson and internationalism, including the 6-volume The Public Papers of Woodrow Wilson (1925-1927) with William Edward Dodd,[4] and the 8-volume Woodrow Wilson: Life and Letters (1927-39), the last two volumes of which won the Pulitzer Prize for Biography or Autobiography in 1940. He served as an adviser on Darryl F. Zanuck's 1944 film Wilson.