Raymond James Stadium, also known as the "Ray Jay",[5] is a multipurpose football stadium located in Tampa, Florida. It is home to the NFL's Tampa Bay Buccaneers as well as the NCAA's South Florida Bulls football team. The stadium seats 65,890,[6] and is expandable to 75,000 for special events. The stadium also hosts the annual Outback Bowl on New Year's Day; the annual pinnacle of USA equestrian showjumping, the AGA/Budweiser American Invitational; and the Monster Jam monster truck event after the end of football season in January or February.

Raymond James Stadium hosted Super Bowl XXXV on January 28, 2001, between the Baltimore Ravens and New York Giants and Super Bowl XLIII on February 1, 2009, between the Pittsburgh Steelers and the Arizona Cardinals.

Raymond James Stadium was built to replace Tampa Stadium at the demand of new Bucs owner Malcolm Glazer. It is located adjacent to the site of the old stadium on the former location of Al Lopez Field, a minor-league baseball stadium that had been demolished in 1989. Once completed, the final cost of the new stadium was $168.5 million, with the entire cost publicly financed.[7] It was known as Tampa Community Stadium during construction, but the naming rights were bought for $32.5 million for a 13–year deal by St. Petersburg-based Raymond James Financial in June 1998.[8] On April 27, 2006, an extension was signed to maintain naming rights through 2015.

The stadium was selected to host the ACC Championship Game in 2008 and 2009.

On September 28, 2007, the (then-ranked #18) University of South Florida Bulls set a record at Raymond James Stadium with a crowd of 67,018 when they played (then-ranked #5) West Virginia. This record remained the largest non-Super Bowl crowd in the stadium's history until September 29, 2012, when the University of South Florida Bulls played the Florida State University Seminoles before a crowd of 69,383.

Until 2010, every Buccaneers game at Raymond James Stadium sold out. In 2010, all home games failed to sell out and could not be broadcast on local television. The streak carried over until week four of the 2011 season, when it sold enough tickets for its Monday night game with the Indianapolis Colts on October 3 to avoid a local blackout.

The stadium was also home to the former Tampa Bay Mutiny of Major League Soccer and continues to periodically host soccer matches due to its accommodating field dimensions. For example, on June 8, 2012, it hosted the United States men's national soccer team's opening qualifying match against Antigua and Barbuda for the 2014 FIFA World Cup, which the United States won 3-1.[10] 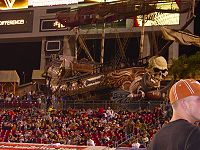 One of the most recognizable features of the stadium is a 103-foot (31 m), 43-ton steel-and-concrete replica pirate ship, which fires soft-rubber footballs and confetti each time the Bucs score points or enter the other team's red zone. The cannon fires once for each point scored. In addition, when the Buccaneers enter their opponent's red zone, stadium hosts hoist team flags around the perimeter of the upper deck. During various times throughout the game, the song "Yo Ho (A Pirate's Life for Me)" is played on the stadium public address system (taken from Pirates of the Caribbean), which signals patrons onboard the ship to throw beads, t–shirts, and other free prizes to the people below. The segment is also known as a "Mini Gasparilla" to most fans. An animated parrot sits on the stern of the pirate ship. Controlled by radio and remote control, the parrot picks fans out of the crowd and talks to those passing by.[11]

During Super Bowl XXXV on CBS, the pregame, halftime, and postgame desk reporting took place from aboard the pirate ship. NBC's Super Bowl XLIII coverage also emanated from the ship.

The two 'Buc Vision' 92-foot (28 m) wide Daktronics video displays were among the largest in the league when they were built. 'Buccaneer Cove' features a weathered, two–story fishing village facade, housing stadium concessions and restrooms. All areas of the stadium are ADA compliant.

Temporary bleachers were erected in the end zones for Super Bowl XXXV, and the attendance was a stadium then-record 71,921.

In 2003, the corner billboards in the stadium were replaced with rotating trilon billboards.

Raymond James Stadium boasts the second-best turf in the NFL, according to a 2009 biannual players' survey.[12]

The stadium is referred to as "Ray Jay" or "The New Sombrero", a spinoff from "The Big Sombrero", the nickname of old Tampa Stadium. Somewhat derisively, it is also sometimes referred to as "the CITS", a name coined by long-time local sportscaster Chris Thomas which stands for "Community Investment Tax Stadium".[13] On occasion during radio broadcasts of games, Buccaneers' radio play-by-play man Gene Deckerhoff refers to the stadium as "Jesse James Stadium". 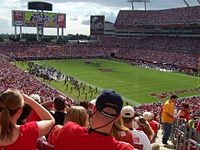 Panoramic view from The Pirate Ship during the 2009 off-season