From Infogalactic: the planetary knowledge core
Jump to: navigation, search
For the administrative unit of some post-Soviet states, see raion.

Rayon is a manufactured regenerated cellulose fiber. It is made from purified cellulose, primarily from wood pulp, which is chemically converted into a soluble compound. It is then dissolved and forced through a spinneret to produce filaments which are chemically solidified, resulting in synthetic fibers of nearly pure cellulose.[1] Because rayon is manufactured from naturally occurring polymers, it is considered a semi-synthetic fiber.[2] Specific types of rayon include viscose, modal and lyocell, each of which differs in manufacturing process and properties of the finished product.

The solubility of nitrocellulose in organic solvents such as ether and acetone was the basis for the first "artificial silk" by Georges Audemars in about 1855. Commercial production started in 1891, but the result was flammable and more expensive than cellulose acetate or cuprammonium rayon. Because of this expense, production ceased early in the 1900s. Nitrocellulose was briefly known as "mother-in-law silk".[3] Frank Hastings Griffin invented the double-godet, a special stretch-spinning process that changed artificial silk to rayon, rendering it usable in many industrial products such as tire cords and clothing. Nathan Rosenstein invented the "spunize process" by which he turned rayon from a hard fiber to a fabric. This allowed rayon to become a popular raw material in textiles.

The Swiss chemist Matthias Eduard Schweizer (1818–1860) discovered that cellulose dissolved in tetraaminecopper dihydroxide. Max Fremery and Johann Urban developed a method to produce carbon fibers for use in light bulbs in 1897.[4] Production of cuprammonium rayon for textiles started in 1899 in the Vereinigte Glanzstoff Fabriken AG in Oberbruch near Aachen.[5] Improvement by the J. P. Bemberg AG in 1904 made the artificial silk a product comparable to real silk.[6] 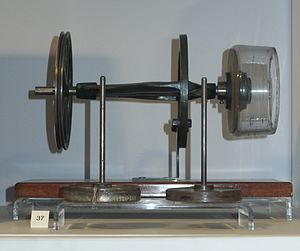 A device for spinning Viscose Rayon dating from 1901

In 1894, English chemist Charles Frederick Cross, and his collaborators Edward John Bevan, and Clayton Beadle patented their artificial silk. They named their material "viscose", because its production involved the intermediacy of a highly viscous solution. The process built on the reaction of cellulose with a strong base, followed by treatment of that solution with carbon disulfide to give a xanthate derivative. The xanthate is then converted back to a cellulose fiber in a subsequent step. The first commercial viscose rayon was produced by the U.K. company Courtaulds Fibres in 1905. Courtaulds formed an American division, American Viscose, (later known as Avtex Fibers) to produce their formulation in the United States in 1910. The name "rayon" was adopted in 1924, with "viscose" being used for the viscous organic liquid used to make both rayon and cellophane. In Europe, though, the fabric itself became known as "viscose", which has been ruled an acceptable alternative term for rayon by the U.S. Federal Trade Commission.

The viscose method can use wood as a source of cellulose, whereas other methods require lignin-free cellulose as starting material. The use of woody sources of cellulose makes viscose cheaper, so it was used on a larger scale than the other methods. On the other hand, the viscose process affords large amounts of contaminated waste water, which are detrimental to the environment. Rayon was produced only as a filament fiber until the 1930s when "broken waste rayon" could be converted to staple fiber.

The physical properties of rayon were unchanged until the development of high-tenacity rayon in the 1940s. Further research and development led to the creation of high-wet-modulus rayon (HWM rayon) in the 1950s.[7] Research in the UK was centred on the government-funded British Rayon Research Association.

Industrial applications of rayon emerged around 1935. Substituting cotton fiber in tires and belts, industrial types of rayon developed a totally different set of properties, amongst which tensile strength (elasticity) was paramount.

Rayon is a versatile fiber and is widely claimed to have the same comfort properties as natural fibers, although the drape and slipperiness of rayon textiles are often more like nylon. It can imitate the feel and texture of silk, wool, cotton and linen. The fibers are easily dyed in a wide range of colors. Rayon fabrics are soft, smooth, cool, comfortable, and highly absorbent, but they do not insulate body heat, making them ideal for use in hot and humid climates, although also making their "hand" (feel) cool and sometimes almost slimy to the touch.[8]

The durability and appearance retention of regular viscose rayon are low, especially when wet; also, rayon has the lowest elastic recovery of any fiber. However, HWM rayon (high-wet-modulus rayon) is much stronger and exhibits higher durability and appearance retention. Recommended care for regular viscose rayon is dry-cleaning only. HWM rayon can be machine washed.[7]

Regular rayon has lengthwise lines called striations and its cross-section is an indented circular shape. The cross-sections of HWM and cupra rayon are rounder. Filament rayon yarns vary from 80 to 980 filaments per yarn and vary in size from 40 to 5000 denier. Staple fibers range from 1.5 to 15 denier and are mechanically or chemically crimped. Rayon fibers are naturally very bright, but the addition of delustering pigments cuts down on this natural brightness.[7]

Regular rayon (or viscose) is the most widely produced form of rayon. This method of rayon production has been utilized since the early 1900s and it has the ability to produce either filament or staple fibers. The process is as follows:

High wet modulus rayon (HWM) is a modified version of viscose that has a greater strength when wet. It also has the ability to be mercerized like cotton. HWM rayons are also known as "polynosic"[clarification needed] or can be identified by the trade name Modal.[9]

High-tenacity rayon is another modified version of viscose that has almost twice the strength of HWM. This type of rayon is typically used for industrial purposes such as tire cord.[9]

Cuprammonium rayon has properties similar to viscose but during production, the cellulose is combined with copper and ammonia (Schweizer's reagent). Due to the environmental effects of this production method, cuprammonium rayon is no longer produced in the United States.[9]

The biodegradability of fibers in soil burial and sewage sludge was evaluated by Korean researchers, and are listed here in order of decreasing biodegradability: rayon, cotton, acetate. The more water-repellent the rayon-based fabric is, the more slowly it will decompose.[10] Silverfish can eat rayon.

A recent ocean survey found that rayon contributed to 56.9% of the total fibers found in deep ocean areas. [11]

Rising cotton prices in 2010 led clothing makers to begin replacing cotton with rayon in their fabrics. As demand for rayon increases, companies such as Fortress Paper have been investing in pulp mills to increase production. Rayon now sells for as much as $2.70 per pound, which has led to an increase in the retail price of clothing made with rayon, yet rayon has a price advantage over cotton.[12]

In early 2010, the U.S. Federal Trade Commission warned several retailers that six major manufacturers were falsely labeling rayon products as "bamboo", in order to appeal to environmentally conscious consumers. While rayon may be produced from bamboo as a raw material, and both rayon and bamboo may be used for similar fabrics, rayon is so far removed from bamboo by chemical processing that the two are entirely separate.[13]

In December 2015, the U.S. Federal Trade Commission announced complaints and proposed court orders barring four national retailers from mislabeling and advertising rayon textiles as made of "bamboo," and requiring them to pay civil penalties totaling $1.3 million. “It’s misleading to call bamboo that has been chemically processed into rayon simply ‘bamboo,’” said Jessica Rich, Director of the Bureau of Consumer Protection. “With consumers in the midst of their holiday shopping, it’s important for them to know that textiles marketed as environmentally friendly alternatives may not be as ‘green’ as they were led to believe.”[14]

Contribution to decline of US textile industry in 1920s

Rayon contributed partly to the decline of the US textile industry in the 1920s.[15] It is far cheaper to produce than wool, cotton or silk. It also requires less processing and hence fewer workers. In addition, it was 50% cheaper than silk during the 1920s in the US.[15] Then, it was used initially for men's socks but later for lingerie and women's stockings.[15] Due to this, textile workers during the 1920s in the US suffered unemployment as employers tried to increase efficiency, ultimately leading to an average mill wage in the South US being $13 for a 60-hour week.[15]

Trade names are used within the rayon industry to label the type of rayon in the product. Viscose Rayon was first produced in Coventry England in 1905 by Courtaulds.

Bemberg, is a trade name for cupramonium rayon developed by J. P. Bemberg. It performs much like viscose but has a smaller diameter and comes closest to silk in feel. Bemberg is now only produced in Italy due to United States Environmental Protection Agency regulations in the US. The fibers are finer than viscose rayon.[6]

Modal and Tencel are widely used forms of rayon produced by Lenzing AG. Tencel, generic name lyocell, is made by a slightly different solvent recovery process, and is considered a different fiber by the US FTC. Tencel lyocell was first produced commercially by Courtaulds' Grimsby plant in England. The process which dissolves cellulose directly in amine oxide was developed by Courtaulds Research in Coventry.

Acordis was a major manufacturer of cellulose based fibers and yarns. Production facilities can be found throughout Europe, the U.S. and Brazil.[16]

Visil rayon is a flame retardant form of viscose which has silica embedded in the fiber during manufacturing.

North American Rayon Corporation of Tennessee produced viscose rayon until its closure in the year 2000.[17][18]

Grasim of India is the largest producer of rayon in the world (claiming 24% market share). It has plants in Nagda, Kharach and Harihar – all in India, as well as joint ventures in Canada, Laos and China.[19]