From Infogalactic: the planetary knowledge core
Jump to: navigation, search
For other uses, see Razorbill (disambiguation).

The razorbill (Alca torda) is a colonial seabird that only comes to land in order to breed. This agile bird chooses one partner for life; females lay one egg per year. Razorbills nest along coastal cliffs in enclosed or slightly exposed crevices. The parents spend equal amounts of time incubating. Once the chick has hatched, the parents take turns foraging for their young and sometimes fly long distances before finding prey.

The razorbill is primarily black with a white underside. The male and female are identical in plumage; however, males are generally larger than females. In 1918, the razorbill was protected in the United States by the Migratory Bird Treaty Act. Presently, the major threat for the population is the destruction of breeding sites.[citation needed]

The razorbill has white underparts and a black head, neck, back and feet during breeding season. A thin white line also extends from the eyes to the end of the bill. Its head is darker than that of a common murre. During the nonbreeding season, the throat and face behind the eye become white, and the white line on the face becomes less prominent.[3] The thick black bill has a blunt end. It is large for an alcid and its mean weight ranges from 505 to 890 g (17.8 to 31.4 oz).[4] The female and male adults are very much alike, having only small differences such as wing length. The wing length of adult males ranges from 201–216 mm (7.9–8.5 in) while that of females ranges from 201 to 213 mm (7.9 to 8.4 in).[5] This species has a horizontal stance and the tail feathers are slightly longer in the center in comparison to other alcids. This makes the razorbill have a distinctly long tail which is not common for an auk. Their mating system is female-enforced monogamy; the razorbill chooses one partner for life. It nests in open or hidden crevices among cliffs and boulders. It is a colonial breeder and only comes to land to breed. The annual survival rate of the razorbill is between 89-95%.[6] Though the razorbill's average lifespan is roughly 13 years, a bird ringed in the UK in 1967 has survived for at least 41 years — a record for the species.[7]

The razorbill is in the genus Alca of the family Alcidae. It is closest living relative to the great auk (Pinguinis impennis), which is now extinct. The clade Alcini also includes the common murre (Uria aalge), the thick-billed murre (Uria lomvia) and the dovekie (Alle alle).[8]

There are two subspecies of razorbill recognized by the American Ornithologists' Union. Alca torda torda, named by Linnaeus in 1758, occurs in the Baltic and White Seas, Norway, Bear Island, Iceland, Greenland, and eastern North America. Alca torda islandica was named by C.L. Brehm in 1831 and occurs throughout the British Isles and northwestern France. The two subspecies differ slightly in bill measurements. A third subspecies, Alca torda pica, is no longer recognized because the distinguishing characteristic, an additional furrow in the upper mandible, is now known to be age-related.

Razorbills are distributed across the North Atlantic; the world population of razorbills is estimated to be at less than 1,000,000 breeding pairs, making them among the rarest auks in the world (Chapdelaine et al. 2001). Approximately half of the breeding pairs occur in Iceland. Razorbills thrive in water surface temperature below 15°C. They are often seen with other larger auks, such as the thick-billed murre and common murre. However, unlike other auks, they commonly move into larger estuaries with lower salinity levels to feed. These birds are distributed across sub-arctic and boreal waters of the Atlantic. Their breeding habitat is islands, rocky shores and cliffs on northern Atlantic coasts, in eastern North America as far south as Maine, and in western Europe from northwestern Russia to northern France. North American birds migrate offshore and south, ranging from the Labrador Sea south to the Grand Banks of Newfoundland to New England. Eurasian birds also winter at sea, with some moving south as far as the western Mediterranean. Approximately 60 to 70% of the entire razorbill population breeds in Iceland.[9]

Razorbill colonies include (north to south): 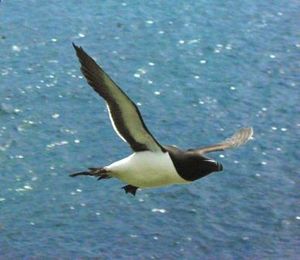 The life history traits of the razorbill are similar to that of the common murre. However, razorbills are slightly more agile. During breeding, both male and female protect the nest. Females select their mate and will often encourage competition between males before choosing a partner.[12] Once a male is chosen, the pair will stay together for life.

Individuals only breed at 3–5 years of age. As pairs grow older they will occasionally skip a year of breeding. A mating pair will court several times during breeding periods to strengthen their bond.[4] Courtship displays include touching bills and following one another in elaborate flight patterns. Once the pre-laying period begins, males will constantly guard their mates by knocking other males away with their bills.[4] The pair will mate up to 80 times in a 30 day period to ensure fertilization.[13] Females will sometimes encourage other males to engage in copulation to guarantee successful fecundity.[12]

Throughout the pre-laying period razorbills will socialize in large numbers. There are two types of socializing that occur. Large groups will dive and swim together in circles repeatedly and all rise up to the surface, heads first and bills open. Secondly, large groups will swim in a line weaving across each other in the same direction. 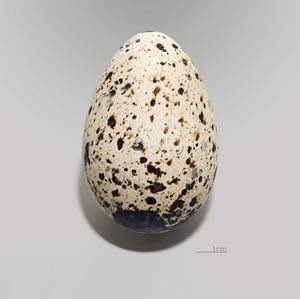 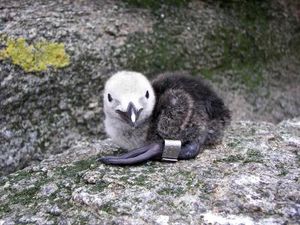 Nest site determination is very important for these birds to ensure protection of young from predators. Unlike murres, nest sites are not immediately alongside the sea on open cliff ledges but at least 10 cm (3.9 in) away, in crevices on cliffs or among boulders. Nests are usually confined among the rocks or slightly more open. Some sites are along ledges, however, crevice sites seem to be more successful due to reduced predation.[14]

The mating pair will often reuse the same site every year.[15][16] Since chicks do not have the ability to fly nests close to sea provide easy access when leaving the colony. Generally razorbills do not build a nest; however, some pairs often use their bills to drag material upon which to lay their eggs.[17]

Females lay a single egg per year. The egg is an ovoid-pyramoidal shape, ground in color and has dark brown blotches. Incubation occurs generally 48 hours after laying the egg. Females and males take turns incubating the egg several times daily for a total of approximately 35 days before hatching occurs. Razorbill chicks are semi-precocial.[18] During the first two days after hatching, the chick will spend the majority of its time under the parent’s wing. There is always one parent at the nest site while the other goes to sea to collect food for the chick. The hatchling develops a complete sheath 10 days after hatching. After 17–23 days the male parent will accompany the chick to sea.

Razorbills dive deep into the sea using their wings and their streamlined bodies to propel themselves toward their prey. While diving, they rarely stay in groups, but rather spread out to feed. The majority of their feeding occurs at a depth of 25 m (82 ft) but they have the ability to dive up to 120 m (390 ft) below the surface.[19] During a single dive an individual can capture and swallow many schooling fish, depending on their size. Razorbills spend approximately 44% of their time foraging at sea.[20] When feeding their young, they generally deliver small loads. Adults will mainly feed only one fish to their chick with high feeding deliveries at dawn and decreased feeding 4 hours before dark.[4] Females will generally feed their chicks more frequently than males.[20] They may well fly more than 100 km (62 mi) out to sea to feed when during egg incubation, but when provisioning the young, they forage closer to the nesting grounds, some 12 km (7.5 mi) away, and often in shallower water.[10]

The diet of a razorbill is very similar to that of a common murre. It consists generally of mid water schooling fish such as capelin, sand lance, juvenile cod, sprats and herring. It may also include crustaceans and polychaetes. A recent study suggests the razorbill's diet is affected by local and regional environmental conditions in the marine environment [16]

The adult razorbill has several predators which include: polar bears, great black-backed gulls, peregrine falcons, ravens, crows and jackdaws. The general predators of their eggs are gulls and ravens. The best chance for an adult razorbill to avoid predation is by diving. Arctic foxes can also predate significant numbers of adults, eggs, and chicks in some years.[21]

In the early 20th century, razorbills were harvested for eggs, meat and feathers. This greatly decreased the global population. In 1917, they were finally protected by the “Migratory Bird Treaty Act” which reduced hunting.[4] Other threatening interactions include oil pollution which can damage breeding sites. Any damage to breeding sites can reduce possible nest sites and affect reproduction of the species. Commercial fishing affects populations because razorbills can become tangled in nets. Overfishing also decreases the abundance of razorbill prey and thus affects their survival. 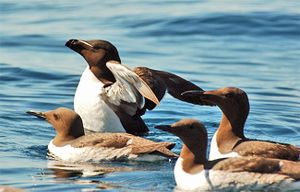 While the razorbill is the only living species, the genus Alca had a much higher diversity in the Pliocene. Some ornithologists also feel it is appropriate to retain the great auk in the genus Alca, instead of Pinguinus.[22] A number of fossil forms have been found:

As far as is known, the genus Alca seems to have evolved in the western North Atlantic or the present-day Caribbean like most other Alcini. Its ancestors would have reached these waters through the still-open Isthmus of Panama during the Miocene.[23]