From Infogalactic: the planetary knowledge core
Jump to: navigation, search
For the modern court, see Audiencia Nacional of Spain.

The Real Audiencia (Spanish pronunciation: [reˈal auˈðjenθja real]), or simply Audiencia (Catalan: Reial Audiència, Audiència Reial, or Audiència), was an appellate court in Spain and its empire. The name of the institution literally translates as Royal Audience.[1] The additional designation chancillería (or cancillería, Catalan: cancelleria, English: chancellery[2]) was applied to the appellate courts in early modern Spain.[3] Each audiencia had oidores (Spanish: judges, literally, "hearers").

The first audiencia was founded in the Kingdom of Castile in 1371 at Valladolid. The Valladolid Audiencia functioned as the highest court in Castile for the next two centuries. Appeals from the Castilian audiencias could only be made to the Council of Castile after its creation in 1480.

After the union of the crowns of Castile and Aragon in the Kingdom of Spain and the subsequent conquest of Granada in 1492, the audiencia was divided in two, with the Audiencia of Valladolid taking cases originating north of the Tagus River, and the Royal Audiencia of Ciudad Real (1494) taking cases from south of the river. The second audiencia was moved to Granada in 1505.[3]

Under Charles V and Philip II, the audiencia system was extended first in Spain proper, with the Royal Audiencia of Aragon (1528) and then to the rest of the Spanish Empire. Audiencias in cities and provinces that belong to Spain today included Seville (1566), Las Palmas (1568), Majorca (1571), Asturias (1717), and Extremadura (1790). The audiencias and viceroys of the Crown of Aragon were overseen by the Council of Aragon, which had been established in 1494.

Audiencias in the Spanish possessions in Europe included the Italian domains of Sardinia (1564–1714) and Kingdom of Sicily (1569–1707). In Italy, the Castilian institution of the audiencia was united with the Aragonese institution of the viceroy. The Aragonese viceroys were literally "vice-kings," and as such, had the power to administer justice and issue laws; therefore they were integrally involved in the judicial proceedings of the Italian audiencias.[4] In 1555 a Council of Italy was created to oversee the viceroys and audiencias in Italy. 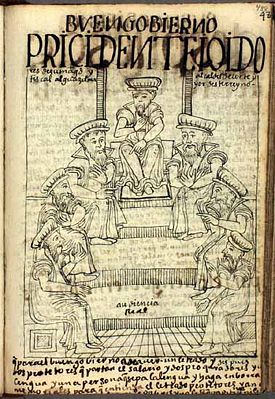 Audiencias in the Indies

In the Indies, the two institutions were also united, but with a different power relationship. The Crown of Castile early on introduced the audiencia into the Americas as part of its campaign to bring the area and its Spanish settlers and conquerors under royal control. With the vast conquests on the American mainland, which began in the 1520s, it became clear that the audiencia system would not be sufficient to effectively run the overseas government. Viceroys were therefore introduced, but without the judicial powers the office had enjoyed under the Aragonese Crown. In the New World, instead, the audiencias were given a consultative and quasi-legislative role in the administration of the territories. Both viceroys and audiencias were ultimately overseen by a Council of the Indies.[5] Most of the laws dealing with the establishment of the 16th- and 17th-century audiencias can be found in Book II, Title XV of the Recopilación de Leyes de los Reynos de las Indias issued in 1680.

The first audiencia in the Americas was established at Santo Domingo (modern Dominican Republic) in 1511 with jurisdiction over the Caribbean islands and the adjacent mainland. It was quickly suppressed due to opposition by the Spanish settlers, but was re-established permanently in 1526.

As the Spanish conquest of the continent continued, more audiencias were founded in the new areas of settlement. The first mainland audiencia was set up in Mexico City in 1527, just six years after the fall of Tenochtitlan, which had jurisdiction over most of what is now Mexico and Central America.

This audiencia was followed by the Audiencia of Panama, 1538, overseeing Central America and the littoral regions of northern South America until its abolishment in 1543. It later was reestablshed with jurisdiction only over Panama proper in 1564, which functioned until 1751.

In 1543 with the abolition of the first Audiencia of Panama, two audiencias were established in its place: one in Guatemala with jurisdiction over Central America and another in Lima with jurisdiction over the newly settled areas of South America, which had been gained by the conquest of Peru and surrounding regions. Venezuela, settled earlier, remained under the jurisdiction of the Audiencia of Santo Domingo until the establishment of the Viceroyalty of New Granada in the early 18th century.

By the end of the 16th century six more audiencias had been established in:

In the 17th century two new audiencias were created in:

The last colonial audiencias were created under the Bourbon kings as part of their administrative reforms, which also involved setting up new viceroyalties. The new dynasty found no need for the second Audiencia of Panama and abolished it in 1751, transferring its jurisdiction to the one in Bogotá. New audiencias were established in:

This meant that at the moment of Spanish American independence in the early 19th century, the overseas possessions of the Spanish Monarchy were overseen by twelve audiencias. After the loss of Santo Domingo to the French in 1795, the Audiencia of Santo Domingo was transferred to Camagüey, Cuba and renamed the Audiencia of Puerto Príncipe. In 1838 a second Cuban audiencia was established in Havana, and from 1831 to 1853 Puerto Rico had its own audiencia.

Duties and composition of audiencias in the Indies

Unlike their peninsular counterparts, the overseas audiencias had legislative and executive functions in addition to their judicial ones, and thus represented the king in his role as maker of laws and dispenser of justice, as evidenced by the fact that, as chanceries (chancillerías, modern Spanish: cancillerías), they alone had the royal seal. Their importance in handling the affairs of state is reflected in the fact that many of the modern countries of Spanish-speaking South America and Panama have boundaries that are roughly the same as those of the former audiencias. Audiencias shared many government duties with the viceroys and governors-captains generals of the regions they oversaw, and so they served as a check on the authority of the latter.

An audiencia could issue local ordinances and served as a "privy council" to the viceroy or governor-captain general. In this function it often met weekly and was called by the term real acuerdo. An audiencia also oversaw the royal treasury, and when meeting in this capacity with the royal treasurer, it was referred to as a junta de hacienda (literally, "finance board"). The crown attorney (fiscal) also had the right to correspond directly with the crown, especially on treasury issues and acuerdo decisions.[6] In turn, in the viceregal capitals of Spanish America, such as Mexico and Lima, the viceroy himself served as a presidente (president) of the audiencia. Likewise the governor-captain general served in this function in the various audiencias located in the capital of a captaincy general. In both cases the president had no vote in judicial matters, unless he was a trained lawyer, and only oversaw the administration of the court.[7]

Audiencia officials, especially the president, were subject to two forms of review. At the end of the president's term, a juicio de residencia (literally, "judgement of the period in office") was carried out, which reviewed the president's performance on the job and collected interviews many people affected by the audiencia's performance. Unscheduled inspections, called visitas (literally, "visits"), were also carried out if the crown felt it was needed. As part of the Bourbon Reforms, further limits were placed on viceroys and captains general. The office of regente, a type of chief justice, was created which removed most of the administrative functions from the viceroy or captain general. Their role as audiencia president became honorary.[8] A viceroy or captain general, as the president of the audiencia, was charged by law with corresponding with the audiencia in writing, not in verbal commands. This created a record that could be checked later. Audiencias were styled, as a body, "vuestra merced" ("your grace", in the singular) and addressed directly as "señores."[9]

The size and composition of an audiencia varied over time and place. For example, the first audiencia of Mexico had four oidores, one president and a fiscal, or crown attorney, meeting as only one chamber overseeing both civil and criminal cases. By the 17th century it had grown to two chambers handling civil and criminal cases separately. The civil chamber had eight oidores and one fiscal. The criminal chamber had four alcaldes del crimen (the chamber's equivalent of an oidor) and its own fiscal. In addition the audiencia had sundry other officers such as notaries, bailiffs, and the equivalent of modern public defenders. The smallest overseas audiencias had a composition similar to the early Mexican one.

In their judicial function, an audiencia heard appeals from cases initially handled by justices of first instance, which could be, among others, guild courts, corregidores, and alcaldes ordinarios. (See Fuero.) The audiencia also served as the court of first instance for crimes committed in the immediate jurisdiction of the city that served as the audiencia's seat and any case involving crown officials. In criminal cases the audiencia was the court of final appeal. Only civil cases involving more than 10,000 silver pesos could be appealed to the Council of the Indies, and only then within a statute of limitation of one year.[10]