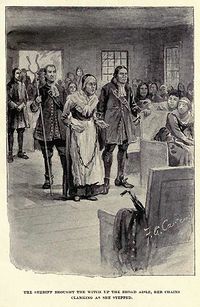 A fanciful representation of Rebecca Nurse's trial from The Witch of Salem, or Credulity Run Mad by John R. Musick.

Rebecca Towne Nurse (or Nourse) (February 21, 1621 – July 19, 1692) was executed for witchcraft by the government of the Province of Massachusetts Bay in New England in 1692, during the Salem witch trials. She was the wife of Francis Nurse, with several children and grandchildren, and a well-respected member of the community. Although there was no credible evidence against her, she was convicted and hanged as a witch on July 19, 1692. This occurred during a time when the Massachusetts colony was seized with hysteria over witchcraft and the supposed presence of Satan within the colony. Her married sisters Mary Eastey and Sarah Cloyce were also accused of witchcraft, with Mary found guilty and executed.

Around 1644, she married Francis Nurse (or Nourse), who was also born in England. Her husband was a "tray maker" by trade, who likely made many other wooden household items. Due to the rarity of such household goods, such artisans were esteemed. Nurse and her family lived on a vast homestead which was part of a 300-acre (1.2 km2) grant given to Townsend Bishop in 1636. Francis originally rented it and then gradually paid it off during his lifetime. The couple had eight children: four daughters and four sons. Their names were Rebecca Nurse (born 1642), Sarah Nurse (born 1644), John Nurse (born 1645), Samuel Nurse (born 1649), Mary Nurse (1653 - June 28, 1749), Elizabeth Nurse (born 1656), Francis Nurse (born 1660/1661), and Benjamin Nurse (born in 1665/1666). Nurse frequently attended church and her family was well respected in Salem Village; Francis was often asked to be an unofficial judge to help settle matters around the village. In 1672, Francis Nurse served as Salem's Constable. It was later written that Rebecca had "acquired a reputation for exemplary piety that was virtually unchallenged in the community," making her one of the "unlikely" persons to be accused of witchcraft.

The Nurse family had been involved in a number of acrimonious land disputes with the Putnam family. On March 23, 1692, a warrant was issued for her arrest based upon accusations made by Edward and John Putnam. Upon hearing of the accusations, the frail 71-year-old Nurse, often described as an invalid, said, "I am innocent as the child unborn, but surely, what sin hath God found out in me unrepented of, that He should lay such an affliction on me in my old age."[1]

A public outcry greeted the accusations made against her, as she was considered to be of a woman of very pious character, who lived in amity with her neighbours, and had a reputation for benevolence as well as piety: even her neighbour Sarah Holton, who had accused Rebecca of acting quite unreasonably in a quarrel over some trespassing pigs, later changed her mind and spoke in Rebecca's defence.[2] Thirty-nine of the most prominent members of the community signed a petition on Nurse's behalf.[3] At age 71, she was one of the oldest accused. Her ordeal is often credited as the impetus for a shift in the town's opinion about the purpose of the witch trials. The examining magistrates, John Hathorne and Jonathan Corwin, who normally regarded the guilt of the accused as self-evident, took a notably different attude in Rebecca's case, as they also did in the case of her sister Mary Eastey, telling her openly that if she was innocent, they prayed that God would show her innocence, for "it is a sad thing to see church members accused".[4] Hathorne was no doubt influenced by the fact that his sister Elizabeth Porter was a close friend of Rebecca, and one of her staunchest defenders.[5]

Her trial began on June 30, 1692. In accordance with the procedures at the time, Mrs. Nurse, like others accused of witchcraft, represented herself since she was not allowed to have a lawyer. By dint of her respectability, many members of the community testified on her behalf, including her family members. The young Ann Putnam Jr. and the other children would break into fits and claim Nurse was tormenting them.[6] Such so-called "spectral evidence" was allowed into the trial to show that Satan was afflicting others in the community at the behest of the accused. In response to their outbursts Nurse stated, "I have got nobody to look to but God."[7] Many of the other afflicted girls were hesitant to accuse Nurse.

In the end, the jury ruled Nurse not guilty. Due to the public outcry and renewed fits and spasms by the girls, the judges asked the jury that the verdict be reconsidered. In particular, Rebecca was asked to explain her remark that another accused witch, Deliverance Hobbs, was "of her company", the implication being that they had both signed a pact with the Devil. Fatally, Rebecca, who was rather deaf, did not hear the question: as she later explained she had been making a legal objection to a co-accused testifying.[8] The jury changed their verdict and sentenced Nurse to death on July 19, 1692. In view of the urgent pleas of her family, and the abundant evidence of her good character, the Governor of Massachusetts, Sir William Phips, granted a reprieve, but such was the uproar from the afflicted girls that he withdrew it.[9]

File:RebeccaNurseHouse.jpg
The Rebecca Nurse Homestead in 2006

Many people described Nurse as "the woman of self-dignity", due to her collected behavior on the gallows. As was the custom, after she was hanged, her body was buried in a shallow grave near the gallows along with other convicted community members on Proctor's Ledge. They were considered unfit for a Christian burial in a churchyard. Nurse's family secretly returned after dark and dug up her body, which they interred properly on their family homestead. In July 1885, her descendants erected a tall granite memorial over her grave in what is now called the Rebecca Nurse Homestead cemetery in Danvers (formerly Salem Village), Massachusetts. The inscription on the monument reads:

Rebecca Nurse, Yarmouth, England 1621. Salem, Mass., 1692.
O Christian Martyr who for Truth could die
When all about thee owned the hideous lie!
The world redeemed from Superstition's sway
Is breathing freer for thy sake today.
(From the poem "Christian Martyr," by John Greenleaf Whittier)

In 1706 her accuser, Ann Putnam, Jr., publicly apologized to the Nurse family for accusing innocent people, naming Rebecca and her two sisters in particular: "I desire to lie in the dust and to be humbled for it, for being the cause of so sad a calamity to them and their families".[10] The Nurse family accepted the apology and were reconciled with Ann:[11] by contrast, they never forgave Samuel Parris, the village minister, whom they held personally to blame for their bereavement- "none can know what we suffered by the loss of such a mother"- and they did not rest until Parris was removed from office in 1697.[12] In 1711, the government compensated the Nurse family for Rebecca's wrongful death. In 1712 her church reversed the verdict of excommunication it had passed on her: "that it be no longer a reproach to her memory or an occasion of grief to her children".[13]

The Nurse family homestead fell into the hands of Putnam family descendant Phineas Putnam in 1784. The Putnam family maintained control of the property until 1908. Today, it is a tourist attraction that includes the original house and cemetery, on 27 of the original 300 acres (1.2 km2).

In 1892 the community erected a second monument recognizing the 40 neighbors, led by Israel and Elizabeth (Hathorne) Porter, who took the risk of publicly supporting Nurse by signing a petition to the court on her behalf in 1692. One signer was General Israel Putnam's father. 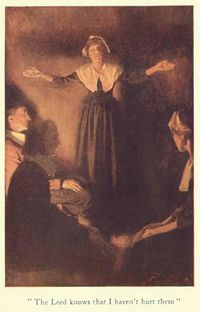 A conceptualized drawing of Rebecca Nurse from A tale of old Salem, by Henry Peterson.

Nurse's trial was featured in an episode of the CBS radio program "CBS Is There," which aired on July 28, 1947.

Rebecca Nurse is a central character in Arthur Miller's play The Crucible. In the original Broadway production in 1953 she was played by Jean Adair, who died shortly afterwards. This work was adapted for films in 1957 and 1996; Nurse was portrayed by actresses Marguerite Coutan-Lambert and Elizabeth Lawrence, respectively. In the first and much acclaimed television adaption by the BBC in 1980 she was played by Ann Dyson.[citation needed]

She inspired other dramatic treatments of the Salem Witch Trials. The PBS film Three Sovereigns For Sarah features Vanessa Redgrave as one of Rebecca Nurse's sisters, Sarah Cloyce; although accused, she escaped execution. The film depicts Nurse and her family members as the main characters. Rebecca was portrayed by actress Shirley MacLaine in the 2002 CBS miniseries, Salem Witch Trials. Nurse was the subject of Lectures on Witchcraft by Charles W. Upham. She is also mentioned in passing in Robin Cook's suspense novel Acceptable Risk. A fictional character believes her to be pious and registers surprise when seeing Nurse on her way to her execution.[citation needed]