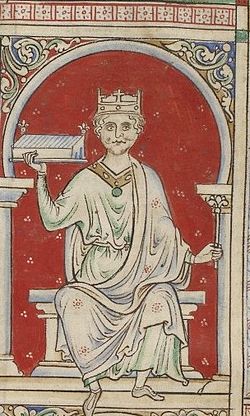 William II, from the Stowe Manuscript

The Rebellion of 1088 occurred after the death of William the Conqueror[1] and concerned the division of lands in the Kingdom of England and the Duchy of Normandy between his two sons William Rufus and Robert Curthose. Hostilities lasted from 3 to 6 months starting around Easter of 1088.[2]

William I on his deathbed in 1087[3] decided how his sons would inherit the lands of his native Normandy and recently conquered England. His eldest son Robert was made Duke of Normandy and his second eldest William Rufus entitled King of England. This came to pass on William's death.[4]

The rebels, led by William the Conqueror's half-brothers Odo of Bayeux[5] and Robert, Count of Mortain, with Odo the stronger of the two and the leader, decided to band together to dispose of young King William II and unite Normandy and England under a single king, the eldest Duke Robert.

Among King William's initial supporters were all the bishops of England, a few major magnates including Alan Rufus (in the east of England north of London up to Yorkshire), William de of Coutances, to Norfolk with Roger Bigod, Roger of Montgomery at Shrewsbury in Shropshire, and a vast swathe of territory in the south-west, centre and south of England under Count Robert. In support of the rebels were Eustace III, Count of Boulogne and "Hugh de Grantmesnil, who had the government of Leicestershire, with Robert de Rhuddlan his nephew, and other knights of distinguished bravery".[6]

A tapestry of Odo of Bayeux

With the coming of spring in 1088, the barons set out on a campaign to lay waste the lands of William II and his supporters. They fortified their own castles and stocked them with provisions, and waited for a response from the king. If for some reason no response came, they knew they could easily live by plundering neighbouring territories, and thus reduce the kingdom to feudal anarchy, a situation the king would eventually have to address.

The king's response was threefold. First, he divided his enemies by promising those who sided with him that they would receive as much money and land as they wanted. Second, he appealed to the English people as a whole, promising them "the best law that had ever been in this land". This had a positive effect in allowing regional garrisons the support they needed to fight the rebels. Finally, he attacked the rebels personally. In a six-week siege of Pevensey Castle he captured the rebel leader Odo.[7]

In a stroke of luck for the king, the troops Robert was sending from Normandy were driven back by bad weather on the seas.[7] Meanwhile, the king, together with some of his allies took Rochester Castle, and with Robert's failure to arrive, the rebels were forced to surrender and the rebellion was over.

Those of William's barons who had remained loyal urged leniency for the rebel barons, Orderic Vitalis says, addressing the king:

If you temper your animosity against these great men, and treat them graciously here, or permit them to depart in safety, you may advantageously

use their amity and service, on many future occasions. He who is your enemy now, may be your useful friend another time.[8]

Odo, previously the richest man in England, was stripped of his belongings and banished to Normandy for life,[7] while his brother Robert of Mortain was allowed to stay in England and keep his estates. Roger of Montgomery had left the rebels and joined with the king after promises of land and money. The king pragmatically kept those aristocrats whom he needed and removed those who were a threat.

William de St-Calais, Bishop of Durham, who had abandoned the king's army during the campaign, was tried later in the year, deposed, and exiled to Normandy, but in 1091 returned and was reinstated.