The Recknitz (historically known as Raxa) is a river in Mecklenburg-Vorpommern in northeastern Germany. The Recknitz's glacial valley stretches as far south as the heights at Glasewitz near Güstrow. The river has no definite source, but rather builds up from streams and drainage ditches. The ditches of the Schaalbeke and Pludderbach have their water flow split between Liessow and Laage, but most of the water flows north as the Recknitz, while the lesser flow, called the Augraben, runs south to the river Nebel.

Starting at Tessin, the Recknitz is navigable by canoe the year round. Over the last few years, a number of measures have been undertaken along the river's course to restore the natural environment, making the landscape considerably more attractive in some people's eyes. On the other hand, others hold that the work will turn many parts of the river into a boggy, marshy wilderness full of reeds. Along one stretch of 30 km, three sections of riverside have been declared nature protection areas. 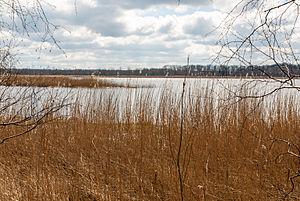 The Recknitz empties into the Saaler Bodden, the coastal waters of the Baltic Sea near Ribnitz-Damgarten.

In October 955 A.D. the vicinity of river was the site of famous Schlacht an der Raxa (Battle of Recknitz) between the German (Saxons and Frisians) army of Emperor Otto I of Germany commanded by Gero the Great and the Obodrite and other Polabian Slavs warriors army under prince Stoigniew, brother of prince Nakon.