Recoil operation is an operating mechanism used to implement locked-breech, autoloading firearms. Recoil operated firearms use the energy of recoil to cycle the action.

The same forces that cause the ejecta of a firearm (the projectile(s), propellant gas, wad, sabot, etc.) to move down the barrel also cause all or a portion of the firearm to move in the opposite direction. The result is required by the conservation of momentum and is expressed in the formula:

which by the definition of momentum is calculated by:

In non-recoil-operated firearms, it is generally the entire firearm that recoils. However, in recoil-operated firearms, only a portion of the firearm recoils while inertia holds another portion motionless relative to a mass such as the ground, a ship's gun mount, or a human holding the firearm. The moving and the motionless masses are coupled by a spring that absorbs the recoil energy as it is compressed by the movement and then expands providing energy for the rest of the operating cycle.

Since there is a minimum momentum required to operate a recoil-operated firearm's action, the cartridge must generate sufficient recoil to provide that momentum. Therefore, recoil-operated firearms work best with a cartridge that yields a momentum approximately equal to that for which the mechanism was optimized. For example, the M1911 design with factory springs is optimized for a 230-grain (15 g) bullet at factory velocity. Changes in caliber or drastic changes in bullet weight and/or velocity require modifications to spring weight or slide mass to compensate.

Recoil-operated designs are broadly categorized by how the parts move under recoil. 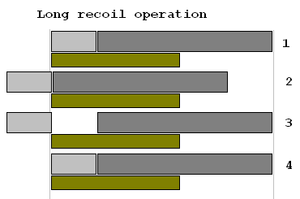 Long recoil operation is found primarily in shotguns, particularly ones based on John Browning's Auto-5 action. In a long recoil action the barrel and bolt remain locked together during recoil, compressing the recoil springs. Following this rearward movement, the bolt locks to the rear and the barrel is forced forward by its spring. The bolt is held in position until the barrel returns completely forward during which time the spent cartridge has been extracted and ejected, and a new shell has been positioned from the magazine. The bolt is released and forced closed by its recoil spring, chambering a fresh round.

The long recoil system was invented in the late 19th century and dominated the automatic shotgun market for more than half that century before it was supplanted by new gas-operated designs. While Browning halted production of the Auto-5 design in 1999, Franchi still makes a long-recoil–operated shotgun line, the AL-48, which shares both the original Browning action design, and the "humpbacked" appearance of the original Auto-5. Other weapons based on the Browning system were the Remington Model 8 semi-automatic rifle (1906), the Remington Model 11 & "The Sportsman" model (a model 11 with only a two-shell magazine) shotguns, the Frommer Stop line of pistols (1907), and the Chauchat machine rifle (1915).

File:P12.45 barrel.jpg
The barrel from a Para Ordnance P12.45, an M1911-derived design which uses short recoil operation. Under recoil, the barrel moves back in the frame, rotating the link (shown in the unlocked position), which causes the rear of the barrel to tip down and disengage from the slide.

The short recoil action dominates the world of centerfire semi-automatic pistols, being found in nearly all such weapons chambered for 9×19mm Parabellum or higher-powered cartridges (weaker cartridges, .380 ACP and below, generally use the blow-back method of operation). Short recoil operation differs from long recoil operation in that the barrel and bolt recoil together only a short distance before they unlock and separate. The barrel stops quickly, and the bolt continues rearward, compressing the recoil spring and performing the automated extraction and feeding process. During the last portion of its forward travel, the bolt locks into the barrel and pushes the barrel back into battery.

The exact method of locking and unlocking the barrel is the primary differentiating factor in the wide array of short recoil designs. Most common are the John Browning tilting barrel designs, based either on the swinging link and locking lugs as used in the M1911 pistol, or the linkless cam design used in the Hi Power and CZ 75. Other common designs are the locking block design found in the Walther P38 and Beretta 92, rollers in the MG42, or a rotating barrel used in the Steyr TMP and Beretta Px4 Storm among others. One unusual variant is the toggle bolt design in C-93 of Hugo Borchardt, used also in the German Luger pistol. 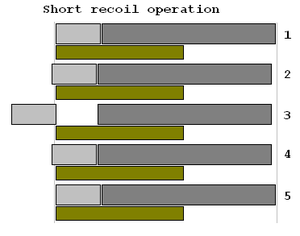 The latest design concept for recoil-operated firearms is the inertia operated system, which was first seen on the Sjögren shotgun in 1908. In a reversal of the other designs, the inertia system uses nearly the entire firearm as the recoiling component, with only the bolt remaining stationary during firing. Because of this, the inertia system is only applied to heavily recoiling firearms, particularly shotguns. Inertia operation was developed by Paolo Benelli in the early 1980s and patented in 1986.[1] Until 2012, all inertia-operated firearms either were made by Benelli, or used a design licensed from Benelli, such as the Franchi Affinity. Then the Browning Arms Company introduced the inertia-operated A5 (trademarked as Kinematic Drive) as successor to the long-recoil operated Auto-5. Both the Benelli and Browning systems are based on a rotating locking bolt, similar to that used in many gas-operated firearms.

Before firing, the bolt body is separated from the locked bolt head by a stiff spring. As the shotgun recoils after firing, inertia causes the bolt body to remain stationary while the recoiling gun and locked bolt head move rearward. This movement compresses the spring between the bolt head and bolt body, storing the energy required to cycle the action. Since the spring can only be compressed a certain amount, this limits the amount of force the spring can absorb, and provides an inherent level of self-regulation to the action, allowing a wide range of shotshells to be used, from standard to magnum loads, as long as they provide the minimum recoil level to compress the spring. Note that the shotgun must be free to recoil for this to work—the compressibility of the shooter's body is sufficient to allow this movement, but firing the shotgun from a secure position in a rest or with the stock against the ground will not allow it to recoil sufficiently to operate the mechanism. Likewise, weapons of this type must be modified (with the addition of extended magazines or stock saddled ammunition slings on shotguns, for example) with care, as any sizable increase in weapon mass can reduce the force of recoil below that required to cycle the action. 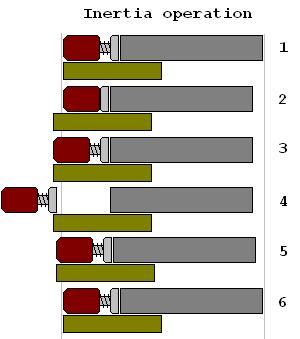 As the recoil spring returns to its uncompressed state, it pushes the bolt body backward with sufficient force to cycle the action. The bolt body unlocks and retracts the bolt head, extracts and ejects the cartridge, cocks the hammer, and compresses the return spring. Once the bolt reaches the end of its travel, the return spring provides the force to chamber the next round from the magazine, and lock the bolt closed.

Some short-recoil–operated firearms, such as the German MG42, use a mechanism at the muzzle to extract some energy from the escaping powder gases to push the barrel backwards, in addition to the recoil energy. This boost provides higher rates of fire and/or more reliable operation. This type of mechanism is also found in some suppressors used on short recoil firearms, under the name gas assist or Nielsen device, where it is used to compensate for the extra mass the suppressor adds to the recoiling parts both by providing a boost and decoupling some of the suppressor's mass from the firearm's recoiling parts.

Muzzle boosters are also used on some recoil-operated firearms' blank-firing attachments to normalize the recoil force of a blank round (with no projectile) with the greater force of a live round, in order to allow the mechanism to cycle properly.

Other autoloading systems are: