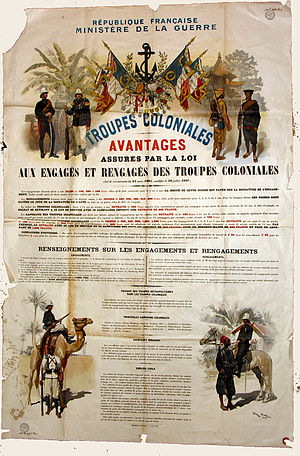 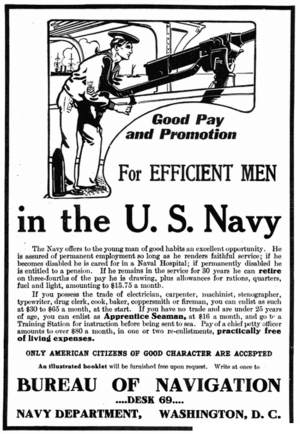 Military recruitment can be considered part of military science if analysed as part of military history. Acquiring large amounts of forces in a relatively short period of time, especially voluntarily, as opposed to stable development, is a frequent phenomenon in history. One particular example is the regeneration of the military strength of the Communist Party of China from a depleted force of 8,000 following the Long March in 1934 into 2.8 million near the end of the Chinese Civil War 14 years later.

Recent cross-cultural studies suggest that, throughout the world, the same broad categories may be used to define recruitment appeals. They include war, economic motivation, education, family and friends, politics, and identity and psychosocial factors.[1]

Wartime recruitment strategies in the US 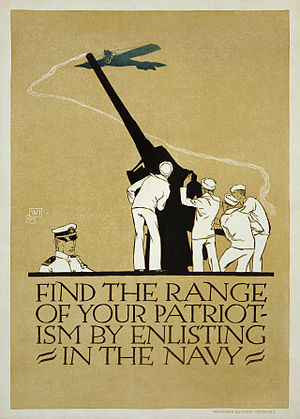 Prior to the outbreak of World War I, military recruitment in the US was conducted primarily by individual states.[2] Upon entering the war, however, the federal government took on an increased role.

The increased emphasis on a national effort was reflected in World War I recruitment methods. Peter A. Padilla and Mary Riege Laner define six basic appeals to these recruitment campaigns: patriotism, job/career/education, adventure/challenge, social status, travel, and miscellaneous. Between 1915 and 1918, 42% of all army recruitment posters were themed primarily by patriotism.[2] And though other themes - such as adventure and greater social status - would play an increased role during World War II recruitment, appeals to serve one’s country remained the dominant selling point.

In the aftermath of World War II military recruitment shifted significantly. With no war calling men and women to duty, the United States refocused its recruitment efforts to present the military as a career option, and as a means of achieving a higher education. A majority - 55% - of all recruitment posters would serve this end. And though peacetime would not last, factors such as the move to an all-volunteer military would ultimately keep career-oriented recruitment efforts in place.[3] The Defense Department turned to television syndication as a recruiting aid from 1957-1960 with a filmed show, Country Style, USA.

On February 20, 1970, the President’s Commission on an All-Volunteer Armed Force unanimously agreed that the United States would be best served by an all-volunteer military. In supporting this recommendation, the committee noted that recruitment efforts would have to be intensified, as new enlistees would need to be convinced rather than conscripted. Much like the post-World War II era, these new campaigns put a stronger emphasis on job opportunity. As such, the committee recommended “improved basic compensation and conditions of service, proficiency pay, and accelerated promotions for the highly skilled to make military career opportunities more attractive.” These new directives were to be combined with “an intensive recruiting effort.” [4] Finalized in mid-1973, the recruitment of a “professional” military was met with success. In 1975 and 1976, military enlistments exceeded expectations, with over 365,000 men and women entering the military. Though this may, in part, have been the result of a lack of civilian jobs during the recession, it nevertheless stands to underline the ways in which recruiting efforts responded to the circumstances of the time.[5]

Indeed, recommendations made by the President's Commission continue to work in present-day recruitment efforts. Understanding the need for greater individual incentive, the US military has re-packaged the benefits of the GI Bill. Though originally intended as compensation for service, the bill is now seen as a recruiting tool. Today, the GI Bill is "no longer a reward for service rendered, but an inducement to serve and has become a significant part of recruiter's pitches.” [6]

Military recruitment in the United Kingdom

Further information: Conscription in the United Kingdom and Recruitment in the British Army

During both world wars and a period after the second, military service was mandatory for at least some of the British population. At other times, techniques similar to those outlined above have been used. The most prominent concern over the years has been the minimum age for recruitment, which has been 16 for many years.[7] This has now been raised to 18 in relation to combat operations. In recent years, there have been various concerns over the techniques used in (especially) army recruitment in relation to the portrayal of such a career as an enjoyable adventure.[8][9]

Military recruitment in the United States

The American military has had recruiters since the time of the colonies in the 1700s. Today there are thousands of recruiting station across the United States, serving the Army, Navy, Marines, and Air Force. Recruiting offices normally consist of 2-8 recruiters between the ranks of E-5 and E-7. When a potential applicant walks into a recruiting station his or her height and weight are checked and their background investigated. A finger print scan is conducted and a practice ASVAB exam is given to them. Applicants can not officially swear their enlistment oath in the recruiting office. This is conducted at a Military Entrance Processing Station - MEPS.

From the times of the British Raj, recruitment in India has been voluntary. Using Martial Race theory, the British recruited heavily from selected communities for service in the colonial army.[10] The largest of the colonial military forces the British Indian Army of the British Raj until Military of India, was a volunteer army, raised from the native population with British officers. The Indian Army served both as a security force in India itself and, particularly during the World Wars, in other theaters. About 1.3 million men served in the First World War. During World War II, the British Indian Army would become the largest volunteer army in history, rising to over 2.5 million men in August 1945.[11]

A recruitment centre in the UK, recruiting station in the U.S., or recruiting office in New Zealand,[12] is a building used to recruit people into an organization, and is the most popularized method of military recruitment. The U.S. Army refers to their offices as recruiting centers as of 2012.

A recruitment poster is a poster used in advertisement to recruit people into an organization, and was a popularized method of military recruitment.