A medical/clinical mercury thermometer showing the temperature of 37.7 °C

The first known person to have used a medical thermometer was the Italian physician Santorio Santorii,[1] who in 1602 used and perhaps invented a thermoscope.[2]

The traditional thermometer is a glass tube with a bulb at one end containing a liquid which expands in a uniform manner with temperature. The tube itself is narrow (capillary) and has calibration markings along it. The liquid is often mercury, but alcohol thermometers use a colored alcohol. Medically, a maximum thermometer is often used, which indicates the maximum temperature reached even after it is removed from the body.

Mercury-in-glass thermometers have been considered the most accurate liquid-filled types. However, mercury is a toxic heavy metal, and mercury has only been used in clinical thermometers if protected from breakage of the tube.

The tube must be very narrow to minimise the amount of mercury in it—the temperature of the tube is not controlled, so it must contain very much less mercury than the bulb to minimise the effect of the temperature of the tube—and this makes the reading rather difficult as the narrow mercury column is not very visible. Visibility is less of a problem with a coloured liquid.

In the 1990s it was decided[3] that mercury-based thermometers were too risky to handle; the vigorous swinging needed to "reset" a mercury maximum thermometer makes it easy to accidentally break it and spill the moderately poisonous mercury. Mercury thermometers have largely been replaced by electronic digital thermometers, or, more rarely, thermometers based on liquids other than mercury (such as galinstan, coloured alcohols and heat-sensitive liquid crystals). 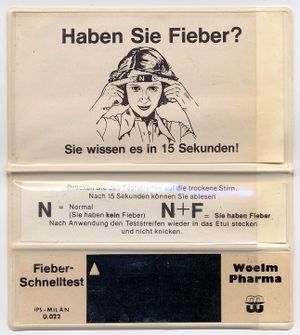 Since compact and inexpensive methods of measuring and displaying temperature became available, electronic thermometers (often called digital, because they display numeric values) have been used. Many display readings to great precision (0.1 °C or 0.2 °F, sometimes half that), but this should not be taken as a guarantee of accuracy: specified accuracy must be checked in documentation and maintained by periodical recalibration. A typical inexpensive electronic ear thermometer for home use has a displayed resolution of 0.1 °C, but a stated accuracy within ±0.2 °C when new.[4] The first electronic clinical thermometer, invented in 1954, used a flexible probe that contained a Carboloy thermistor.[5]

RTDs are wire windings or other thin film serpentines that exhibit changes in resistance with changes in temperature.They measure temperature using the positive temperature coefficient of electrical resistance of metals. The hotter they become, the higher the value of their electrical resistance. Platinum is the most commonly used material because it is nearly linear over a wide range of temperatures, is very accurate, and has a fast response time. RTDs can also be made of copper or nickel. o Advantages of RTDs include their stable output for long periods of time. They are also easy to calibrate and provide very accurate readings. o Disadvantages include a smaller overall temperature range, higher initial cost, and a less rugged design

Thermocouples are accurate, highly sensitive to small temperature changes, and quickly respond to changes to the environment. They consist of a pair of dissimilar metal wires joined at one end. The metal pair generates a net thermoelectric voltage between their opening and according to the size of the temperature difference between the ends. •Advantages of thermocouples include their high accuracy and reliable operation over an extremely wide range of temperatures. They are also well-suited for making automated measurements both inexpensive and durable. •Disadvantages include errors caused by their use over an extended period of time, and that two temperatures are required to make measurements. Thermocouple materials are subject to corrosion, which can affect the thermoelectric voltage

Thermistor elements are the most sensitive temperature sensors available. A thermistor is a semiconductor device with an electrical resistance that is proportional to temperature. There are two types of products. •Negative temperature coefficient (NTC) devices are used in temperature sensing and are the most common type of thermistor. NTCs have temperatures that vary inversely with their resistance, so that when the temperature increases, the resistance decreases, and vice versa. NTCs are constructed from oxides of materials such as nickel, copper, and iron. • Positive temperature coefficient (PTC) devices are used in electric current control. They function in an opposite manner than NTC in that the resistance increases as temperature increases. PTCs are constructed from thermally sensitive silicons or polycrystalline ceramic materials. • There are several advantage and disadvantages to using an NTC thermistor thermometer. • Advantages include their small size and high degree of stability. NTCs are also long lasting and very accurate. • Disadvantages include their non-linearity, and unsuitability for use in extreme temperatures

Other electronic thermometers work by remote sensing: an infrared sensor responds to the radiation spectrum emitted from the location. Although these are not in direct contact with the area being measured, they may still contact part of the body (a thermometer which senses the temperature of the eardrum without touching it is inserted into the ear canal). To eliminate the risk of patient cross-infection, disposable probe covers and single-use clinical thermometers of all types are used in clinics and hospitals.

According to a 2001 research, electronic thermometers on the market significantly underestimate higher temperatures and overestimate lower temperatures. The researchers conclude that "the current generation of electronic, digital clinical thermometers, in general, may not be sufficiently accurate or reliable to replace the traditional glass/mercury thermometers"[6][7]

The temperature can be measured in various locations on the body which maintain a fairly stable temperature (mainly sub-lingual, axillary, rectal, vaginal, forehead, or temporal artery). The normal temperature varies slightly with the location; an oral reading of 37 °C does not correspond to rectal, temporal, etc. readings of the same value. When a temperature is quoted the location should also be specified. If a temperature is stated without qualification (e.g., typical body temperature) it is usually assumed to be sub-lingual. The differences between core temperature and measurements at different locations, known as clinical bias, is discussed in the article on normal human body temperature. Measurements are subject to both site-dependent clinical bias and variability between a series of measurements (standard deviations of the differences). For example, one study found that the clinical bias of rectal temperatures was greater than for ear temperature measured by a selection of thermometers under test, but variability was less.[9]

Oral temperature may only be taken from a patient who is capable of holding the thermometer securely under the tongue, which generally excludes small children or people who are unconscious or overcome by coughing, weakness, or vomiting. (This is less of a problem with fast-reacting digital thermometers, but is certainly an issue with mercury thermometers, which take several minutes to stabilise their reading.) If the patient has drunk a hot or cold liquid beforehand time must be allowed for the mouth temperature to return to its normal value.[10]

The armpit (axillary) temperature is measured by holding the thermometer tightly under the armpit. One needs to hold the thermometer for several minutes to get an accurate measurement. 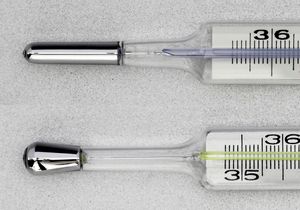 Another method is to measure the temperature of the tympanum by infrared measurement. This tympanic thermometer has a projection (protected by a one-time hygienic sheath) that contains the infrared probe; the projection is gently placed in the ear canal and a button pressed; the temperature is read and displayed within about a second. These thermometers are used both in the home (models are available for prices starting at around 20 USD) and in medical facilities.

A newer development is the temporal artery thermometer, which uses the infrared principle to accurately report a patient's temperature, with comparable accuracy to rectal thermometry.[citation needed]

The band thermometer is applied to the patient's brow. It is typically a band coated with different temperature-sensitive markings using plastic strip thermometer or similar technology; at a given temperature the markings (numerals indicating the temperature) in one region are at the right temperature to become visible. This type gives an indication of fever, but is not considered accurate.