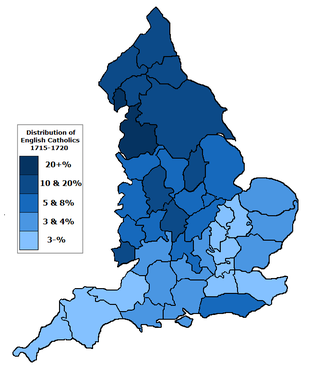 In the history of England and Wales, recusancy was the state of those who refused to attend Anglican services; these individuals were known as recusants.[1] The term, which derives ultimately from the Latin recusare (to refuse or make an objection)[2] was first used to refer to those who remained loyal to the Roman Catholic Church and did not attend Church of England services, with a 1593 statute determining the penalties against "Popish recusants".[3]

The "Recusancy Acts" began during the reign of Elizabeth I and were repealed in 1650.[4] They imposed various types of punishment on those who did not participate in Anglican religious activity, such as fines, property confiscation, and imprisonment.[5] Despite their repeal, restrictions against Roman Catholics were still in place until full Catholic Emancipation in 1829.[6] In some cases those adhering to Catholicism faced capital punishment,[7] and a number of English and Welsh Catholics executed in the 16th and 17th centuries have been canonised by the Catholic Church as Christian martyrs (see Catholic martyrs of the English Reformation).[8]

After the English Reformation, from the 16th to the 19th century those guilty of such nonconformity, termed "recusants", were subject to civil penalties and sometimes, especially in the earlier part of that period, to criminal penalties. Roman Catholics formed a large proportion, if not a plurality, of recusants, and it was to Catholics that the term initially was applied. Non-Catholic groups composed of Reformed Christians or Protestant dissenters from the Church of England were later labelled "recusants" as well. The recusancy laws were in force from the reign of Elizabeth I to that of George III, but not always enforced with equal intensity.[9]

The first statute to address sectarian dissent from England's official religion was enacted in 1593 under Elizabeth I and specifically targeted Catholics, under the title "An Act for restraining Popish recusants". It defined "Popish recusants" as those "convicted for not repairing to some Church, Chapel, or usual place of Common Prayer to hear Divine Service there, but forbearing the same contrary to the tenor of the laws and statutes heretofore made and provided in that behalf." Other Acts targeted Catholic recusants, including statutes passed under James I and Charles I, as well as laws defining other offences deemed to be acts of recusancy. Recusants were subject to various civil disabilities and penalties under English penal laws, most of which were repealed during the Regency and the reign of George IV (1811–30). The Nuttall Encyclopædia notes that Dissenters were largely forgiven by the Act of Toleration under William III, while Catholics "were not entirely emancipated till 1829".[10]

Early recusants included Protestant dissenters, whose confessions derived from the Calvinistic Reformers or Radical Reformers. With the growth of these latter groups after the Restoration of Charles II, they were distinguished from Catholic recusants by the terms "nonconformist" or "dissenter". The recusant period reaped an extensive harvest of saints and martyrs. Among the recusants were some high-profile Catholic aristocrats such as the Howards and, for a time, the Plantagenet-descended Beauforts. This patronage ensured that an organic and rooted English base continued to inform[clarification needed] the country's Catholicism, in addition to later immigration from Ireland, and later from Poland and Lithuania, among other places.

In the English-speaking world, the Douay-Rheims Bible was translated from the Latin Vulgate by expatriate recusants in Rheims, France in 1582 (New Testament) and in Douai, France in 1609 (Old Testament). It was revised by Bishop Richard Challoner in 1749–52. The 1750 revision is still printed today.[citation needed] Until the prompting for "new translations from the original languages" in Pope Pius XII's 1942 Papal encyclical Divino afflante Spiritu, and by the Second Vatican Council, it was the translation used by most Catholics. After Divino afflante Spiritu, translations multiplied in the Catholic world (just as they multiplied in the Protestant world around the same time beginning with the Revised Standard Version) Various other translations were used by Catholics around the world for English-language liturgies, ranging from the New American Bible, the Jerusalem Bible, the Revised Standard Version Second Catholic Edition, and the upcoming English Standard Version Catholic lectionary. The Douay-Rheims Challoner Bible is still often preferred by more conservative or Traditionalist Catholics.[citation needed]

As far as the term is used in the present day, recusant applies to the descendants of Catholic British gentry and peerage families. Catholicism was the majority religion in various pockets, notably in parts of Lancashire, Yorkshire and Cumbria, and in Scotland, in parts of the Highlands and the southern Hebrides (i.e. South Uist, Benbecula, Eriskay, Barra and Vatersay).

The term recusant is also used more generally to refer to non-compliance with a perceived innovation of questionable orthodoxy, which had become the status quo. Some traditional Catholics have used the term following Vatican II, particularly in defence of the Latin mass and sacred tradition.[11]

The recusant Howard family, some of whose members are known as Fitzalan-Howard, the Dukes of Norfolk, the highest-ranking non-royal family in England and hereditary holders of the title of Earl Marshal, is the most prominent Catholic family in England. Other members of the Howard family, the Earls of Carlisle, Effingham and Sussex are Anglican including a cadet branch of the Carlisles who own Castle Howard in Yorkshire. Recusancy was historically focused in Northern England, particularly Cumbria, Lancashire and Yorkshire. The Acton (also known as Dalberg-Acton and Lyon-Dalberg-Acton) family is another well-known recusant family.

The will of a William Latewise who died in 1603 in Goosnargh – part of the parish of Kirkham – states he was "of Culcheth in the parish of Winwick". One of those preparing his inventory in 1608 was John Sterrope, possibly his son-in-law. Around this time the area around Goosnargh was home to several Catholic families – Beesley, Hesketh, Keighley, Marsden, and Threlfall. Records show that various members of the Latewysse (of Goosnargh) family were fined for recusancy. In Wales, the few recusant families include Mostyn (of Mostyn), Herbert (of Treowen), Morgan (of Llantarnam) and, most notably, the Vaughan family (of Courtfield, near Ross-on-Wye; the family of Herbert Cardinal Vaughan).[citation needed]

Conversely, some old recusant families, such as the Earls of Shrewsbury, the viscounts Gage (of Firle Place, Sussex), Molyneux (Earls of Sefton), Swinburne (of Capeheaton), and the Giffards of Chillington, embraced Anglicanism.[citation needed]

The principal growth in the numbers of Catholics in modern Britain has been via immigration. In the past, Catholic immigrants were Europeans, most notably Irish, and, later in the 20th century, from Poland, Italy, Spain, France and Lithuania. There was a steady flow of Anglican lay people and clergy into the Roman Catholic Church over the last decade of the 20th century and, to a lesser degree, since then. High-ranking clerical converts include Monsignor Graham Leonard (former Anglican Bishop of London); Alan Hopes (a present-day Roman Catholic Bishop of East Anglia) and several hundred priests who were received into the Church, mostly from the Church of England.[citation needed]

Katharine, Duchess of Kent; her son and grandson, Lord Nicholas Windsor and Edward Windsor, Lord Downpatrick, respectively, both of whose wives are Catholic, and her granddaughter, Lady Marina-Charlotte Windsor, as well as politicians such as Baroness Masham of Ilton and Ann Widdecombe (MP), and, most recently, former Prime Minister Tony Blair, whose wife and children are Roman Catholics, are prominent among laypeople who have converted. Several prominent former and or current newspaper editors and publishers became Roman Catholics as well: Charles Moore (The Daily Telegraph), John Wilkins and Clifford Longley (The Tablet) and Dr William Oddie (The Catholic Herald). 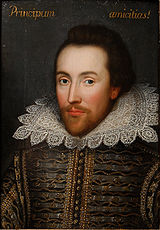 Another notable English Roman Catholic, possibly a convert,[14] was composer William Byrd. Some of Byrd's most popular motets were actually written as a type of correspondence to a friend and fellow composer, Philippe de Monte. De Monte wrote his own motets in response, such as the "Super Flumina Babylonis". These correspondence motets often featured themes of oppression or the hope of deliverance.

The Jacobean poet John Donne was another notable Englishman born into a recusant Catholic family.[15] He later, however, wrote two anti-Catholic polemics and, at the behest of King James I of England, was ordained into the Church of England.

Guy Fawkes, an Englishman and a Spanish soldier, along with other recusants or converts, including, among others, Sir Robert Catesby, Christopher Wright, John Wright and Thomas Percy, was arrested and charged with attempting to blow up Parliament on 5 November 1605. The plot was uncovered and most of the plotters, who were recusants or converts, were tried and executed. The core group of plotters were killed. On the arrival... of the Sheriff of Worcester and his company of men, a gun battle broke out and Catesby, Percy, and both Wright brothers were shot. With medical attention they might have survived, but "the baser sort" among the sheriff's men hurriedly stripped them of their clothes (Christopher's boots were pulled off to reach his silk stockings), and left them to die.[16][better source needed]

Sir Thomas More was a particularly notable English recusant and martyr from the 16th century who was later canonised. Other recusants and martyrs are represented in the Forty Martyrs of England and Wales and among the Jacobites, such as the Earls of Derwentwater, particularly those ennobled in the Jacobite Peerage.[citation needed]

The term "recusancy" is primarily applied to English, Scottish and Welsh Roman Catholics, but there were other instances in Europe. The native Irish, for example, while subject to the British crown, rejected both the Anglican and the dissenting churches, and almost all remained loyal to the Roman Catholic Church, suffering the same penalties as recusants in Great Britain. The situation was exacerbated by land claims, paramilitary violence and ethnic antagonisms on all sides.[17]

The recusancy in Scandinavia did not survive until freedom of religion was re-established there in the mid-19th century, with the overwhelming majority of Roman Catholics in those countries, through the 20th century, being either immigrants or converts.[citation needed]