Red Cloud (Lakota: Maȟpíya Lúta) (1822 – December 10, 1909) was an important leader of the Oglala Lakota. He led from 1868 to 1909. One of the most capable Native American opponents the United States Army faced, he led a successful campaign in 1866–1868 known as Red Cloud's War over control of the Powder River Country in northeastern Wyoming and southern Montana. The largest action of the war, the Fetterman Fight (with 81 men killed on the U.S. side), was the worst military defeat suffered by the U.S. on the Great Plains until the Battle of the Little Bighorn ten years later.

After signing the Treaty of Fort Laramie (1868), Red Cloud led his people in the important transition to reservation life. Some of his US opponents mistakenly thought of him as overall leader of the Sioux (Dakota, Lakota, and Nakota). The large tribe had several major divisions and was highly decentralized. Bands among the Oglala and other divisions operated independently, even though some individual leaders, such as Red Cloud, were renowned as warriors and highly respected as leaders.

Red Cloud was born close to the forks of the Platte River, near the modern-day city of North Platte, Nebraska.[1] His mother, Walks As She Thinks, was an Oglala Lakota and his father, Lone Man, was a Brulé Lakota leader. They came from two of the major seven Lakota divisions.

As was traditional among the matrilineal Lakota, in which the children belonged to the mother's clan and people, Red Cloud was mentored as a boy by his maternal uncle, Old Chief Smoke (1774–1864). Old Chief Smoke played a prominent, major role in the boy's early-mid life. He brought Red Cloud into the Smoke household when the boy's parents died around 1825. At a young age, Red Cloud fought against neighboring Pawnee and Crow, gaining much war experience.

Red Cloud's War was the name the US Army gave to a series of conflicts fought with Native American Plains tribes in the Wyoming and Montana territories. The battles were waged between the Northern Cheyenne, allied with Lakota and Arapaho bands, against the United States Army between 1866 and 1868. In December 1866, the Native American allies attacked and defeated a United States unit in what the whites would call the Fetterman Massacre (or the Battle of the Hundred Slain), which resulted in the most U.S. casualties of any Plains battle up to that point.[2] 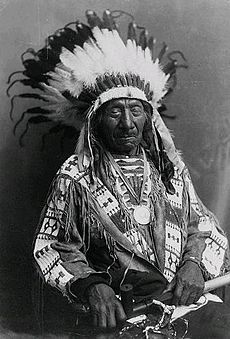 Captain William J. Fetterman was sent from Fort Phil Kearny with two civilians and 79 cavalry and infantrymen to chase away a small Native American war party that had attacked a wood party days before. Captain Frederick Brown accompanied Fetterman; the two were confident in their troops and anxious to go to battle with the Native Americans. They disobeyed orders to stay behind the Lodge Trail Ridge and pursued a small decoy band of warriors, led by a Native American on an apparently injured horse. The decoy was the prominent warrior Crazy Horse. Fetterman and his troops followed the decoy into an ambush by more than 2,000 Sioux, Cheyenne, and Arapaho. Combined Native American forces suffered only 14 casualties, while they killed the entire 81-man US detachment. (See Fetterman Fight)

Following this battle, a US peace commission toured the Plains in 1867 to gather information to help bring about peace among the tribes and with the US. Finding that the Native Americans had been provoked by white encroachment and competition for resources, the commission recommended assigning definite territories to the Plains tribes. The Lakota, Northern Cheyenne, and Arapaho bands, and others settled for peace with the US under the Treaty of Fort Laramie. The US agreed to abandon its forts and withdraw completely from Lakota territory.

The treaty established the Great Sioux Reservation, covering the territory of West River, west of the Missouri River in present-day Nebraska (which had been admitted as a state in 1867), and including parts of South Dakota. Uneasy relations between the expanding United States and the natives continued. In 1870, Red Cloud visited Washington D.C., and met with Commissioner of Indian Affairs Ely S. Parker (a Seneca and U.S. Army General) and President Ulysses S. Grant.

In 1871, the government established the Red Cloud Agency on the Platte River, downstream from Fort Laramie. As outlined in the Treaty of 1868, the agency staff were responsible for issuing weekly rations to the Oglala, as well as providing the annually distributed supply of cash and annuity goods. The agent and Washington officials would determine how much of the annuity was to be paid in cash or goods, and sometimes the supplies were late, in poor condition, inadequate in amount, or never arrived at all. Red Cloud took his band to the agency (a predecessor of the Native American reservation) and tried to help them in the transition to a different way of life. In the fall of 1873, the agency was removed to the upper White River in northwestern Nebraska.

Red Cloud settled at the agency with his band by the fall of 1873. He soon became embroiled in a controversy with the new Indian agent, Dr. John J. Saville.

In 1874, General George Custer led a reconnaissance mission into Sioux territory that reported gold in the Black Hills, an area held sacred by the local Native Americans. Formerly, the Army tried to keep miners out but did not succeed; the threat of violence grew. In May 1875, Lakota delegations headed by Red Cloud, Spotted Tail, and Lone Horn traveled to Washington, DC in an attempt to persuade President Grant to honor existing treaties and stem the flow of miners into their lands. The Native Americans met on various occasions with Grant, Secretary of the Interior Delano, and Commissioner of Indian Affairs Smith. He told them on May 27 that Congress was ready to resolve the matter by paying the tribes $25,000 for their land and resettling them into Indian Territory. The delegates refused to sign such a treaty, with Spotted Tail saying about the proposal:

“When I was here before, the President gave me my country, and I put my stake down in a good place, and there I want to stay.... You speak of another country, but it is not my country; it does not concern me, and I want nothing to do with it. I was not born there.... If it is such a good country, you ought to send the white men now in our country there and let us alone.”[3]

Although Red Cloud was unsuccessful in finding a peaceful solution, he did not take part in the Lakota war of 1876-1877, which was led by Tȟašúŋke Witkó (Crazy Horse) and Tȟatȟáŋka Íyotake (Sitting Bull).

Red Cloud became an important leader of the Lakota as they transitioned from the freedom of the plains to the confinement of the reservation system. His trip to Washington, D.C. had convinced him of the number and power of European Americans, and he believed the Oglala had to seek peace.

In 1884, he and his family, along with five other leaders, converted and were baptized as Catholics by Father Joseph Bushman.[4]

Red Cloud continued fighting for his people, even after being forced onto the reservation. In 1887 Red Cloud opposed the Dawes Act, which broke up communal tribal holdings, and allocated 160-acre plots of land to heads of families on tribal rolls for subsistence farming. The US declared additional communal tribal lands as excess, and sold it to immigrant settlers. In 1889 Red Cloud opposed a treaty to sell more of the Lakota land. Due to his steadfastness and that of Sitting Bull, government agents obtained the necessary signatures for approval through subterfuge, such as using the signatures of children. He negotiated strongly with Indian Agents such as Dr. Valentine McGillycuddy.

He outlived all the other major Lakota leaders of the Indian Wars. He died in 1909 at age 88 on the Pine Ridge Reservation, where he was buried. He is quoted as saying in his old age, "They made us many promises, more than I can remember. But they kept but one--They promised to take our land...and they took it."[5]

Announcements of Red Cloud's death and recognition of his achievements were printed in major newspapers across the country. As had been typical of the US perception during Red Cloud's prominence in war, the article in The New York Times mistakenly described him as leader of all the Sioux bands and tribes, but noted his abilities as a leader and diplomat. While he was a prominent leader, the Lakota were highly decentralized and never had one overall leader, especially of the major divisions, such as Oglala and Brulé.[6][7][8]

Red Cloud was among the Indians photographed by Edward S. Curtis. In 2000, he was posthumously selected for induction into the Nebraska Hall of Fame. He has been honored by the United States Postal Service with a 10¢ Great Americans series postage stamp.

Theodore Sorensen wrote in Kennedy that President John F. Kennedy considered naming one of the 41 for Freedom ballistic missile submarines after Red Cloud, but apparently bowed to Pentagon concerns that the name could be misinterpreted as being pro-Communist.

Red Cloud descendants have continued to be chosen as traditional leaders of the Lakota people:

Oliver Red Cloud died July 4, 2013 at the age of 93.[9] He was the fourth-generation direct descendant of Red Cloud. Oliver was a leader of the Oglala Lakota people and Speaker of the traditional Lakota Sioux Nation. He was the Chairman of the "Black Hills Sioux Nation Treaty Council".