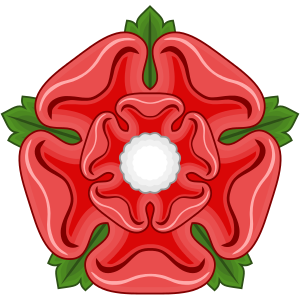 Lancashire Rose, the heraldic device of the House of Lancaster

The Red Rose of Lancaster (a rose gules) is the county flower of Lancashire.

The exact species or cultivar which the red rose relates to is uncertain, but it is thought to be Rosa gallica officinalis.

The rose was first adopted as an heraldic device by the first Earl of Lancaster and became the emblem of Lancashire following the Battle of Bosworth in 1485. 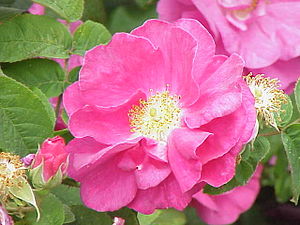 Lancaster's Red Rose (also known as Apothecary's Rose, Old Red Damask and Rose of Provins) is an official variety and is possibly the first cultivated rose. The rose grew wild throughout Central Asia and was discovered by the ancient Persians and Egyptians. Later adopted by the Romans, who introduced it to Gaul (France) where it assumed the name Rosa gallica. It is documented that Charlemagne's court exploited the rose as a perfume. The rose was also appreciated for its medical value and was utilized in countless medical remedies.

The Tudor Rose of England

It is believed that the Red Rose of Lancaster was the House of Lancaster's badge during the Wars of the Roses. There are, however, doubts as to whether the red rose was actually an emblem taken up by the Lancastrians during the Wars of the Roses. Adrian Ailes has noted that the red rose “probably owes its popular usage to Henry VII quickly responding to the pre-existing Yorkist white rose in an age when signs and symbols could speak louder than words.

It also allowed Henry to invent and exploit his most famous heraldic device, the Tudor Rose, combining the so-called Lancastrian red rose and the White Rose of York. This floral union neatly symbolised the restoration of peace and harmony and his marriage in January 1486 to Elizabeth of York. It was a brilliant piece of simple heraldic propaganda.”[1] The Tudor Rose is used as the plant badge of England (Scotland uses the thistle, Ireland uses the shamrock, and Wales uses the leek). 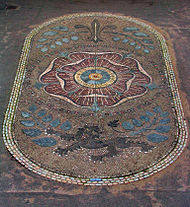 A cobblestone mosaic showing the Red Rose of Lancaster in Williamson Park, Lancaster

The rose does not form any part of the insignia of the Duchy of Lancaster, but came to be seen as an emblem of the county of Lancashire, and as such was incorporated in the coats of arms of numerous Lancashire local authorities including the county council. Since 1974 a number of metropolitan boroughs in Greater Manchester and Merseyside have included red roses in their armorial bearings to show their formation from parts of Lancashire. It is also present in the crest of the coat of arms of the London Borough of Enfield.

The traditional Lancashire flag, red rose on a white field, was never officially registered with the Flag Institute and when this was attempted it was found that this flag had been registered by the town of Montrose, Scotland. As two flags of the same design can not be registered, Lancashire’s official flag is now registered as a red rose on a yellow field.[2][3]

Today the Red Rose is still widely used, and not necessarily on a yellow background. Lancashire County Cricket Club still use the rose as an emblem. The Trafford Centre also feature Red Roses in its architecture, most noticeably on all of the glass panes in the shopping centre. Edge Hill University in Ormskirk uses the Red Rose on a yellow background on its crest along with a Liver bird which signifies its current location (Lancashire) and origins in Liverpool. [4]

From the nineteenth century the red rose was part of the badge of a number of units of the British Army recruiting in the county. In World War I the rose was worn by British 55th (West Lancashire) Division during their campaign in Belgium; their motto was "They win or die, who wear the Rose of Lancaster". The cap badge of the Duke of Lancaster's Regiment, formed in 2006, features the rose.

The Saskatoon Light Infantry of the Canadian Army also incorporated the red rose into the design of their cap badge and regimental buttons, due to an alliance with the York and Lancaster Regiment of the British Army.

The Canadian city of Montreal, has a Lancastrian rose in the top right hand corner of its flag, representing the city's historical English community.

The City of Lancaster, Pennsylvania, known as "Red Rose City", uses the Lancastrian rose as its seal, and in its flag.