From Infogalactic: the planetary knowledge core
Jump to: navigation, search
For other uses, see Redrum (disambiguation).

Red Rum (bay gelding; 3 May 1965 – 18 October 1995; sire: Quorum, dam: Mared) was a champion Thoroughbred steeplechaser Born and bred irish chaser, he was bred by the McEnery family in kells,county Kilkenny, IRELAND. who achieved an unmatched historic treble when he won the Grand National in 1973, 1974 and 1977, and also came second in the two intervening years (1975 & 1976). The world-famous steeplechase is a notoriously difficult race that has been described as "the ultimate test of a horse’s courage".[1]

He was also renowned for his jumping ability, having not fallen in 100 races.[2]

Red Rum's 1973 comeback victory from 30 lengths behind is often considered one of the greatest Grand Nationals in history.[3][4] In a 2002 UK poll, Red Rum's historic third triumph in the Grand National was voted the 24th greatest sporting moment of all time.[5]

Red Rum was bred at Rossenarra stud in Kells, County Kilkenny, Ireland, by Martyn McEnery. His sire was Quorum (1954-1971), and his dam Mared (1958-1976). McEnery gave Red Rum his name by taking the last three letters of the names of his dam and sire respectively.[6] Bred to win one-mile races, he won his National titles over the longest distance, four miles and four furlongs. Red Rum started his career running in cheap races as a sprinter and dead-heated in his first race, a five-furlong flat race at Aintree Racecourse.[7] He ran another seven times as a two-year-old winning over 7f at Warwick, and won over 7f at Doncaster in the first of his two races as a three-year-old. In his early career, he was twice ridden by Lester Piggott.[8] The comedian Lee Mack, then a stable boy, had his first riding lesson on Red Rum.[9]

After being passed from training yard to training yard, he found his footing when Southport car dealer Ginger McCain bought him for his client Noel le Mare and famously trained the horse on the sands at Southport, England.[10] Galloping through sea water may have proved highly beneficial to Red Rum’s hooves.[11] McCain reportedly took Red Rum for a therapeutic swim in the sea off Southport before his first National appearances to help treat the horse's pedal osteitis, a debilitating incurable bone disease in his hoof. McCain also won the Grand National in 2004 with Amberleigh House, 31 years after his first victory with Red Rum.[12]

The crowd are willing him home now. The 12-year-old Red Rum, being preceded only by loose horses, being chased by Churchtown Boy... They're coming to the elbow, just a furlong now between Red Rum and his third Grand National triumph! It's hats off and a tremendous reception, you've never heard one like it at Liverpool - Red Rum wins the National!

At the 1973 Grand National, Red Rum beat the Australian chaser Crisp, which was carrying 23 pounds more, in a new record time of nine minutes, 1.9 seconds.[14] Crisp led the field virtually all the way in that year's National in which he was 30 lengths clear, and at the last fence was 15 lengths clear of Red Rum, his nearest pursuer. Red Rum and jockey Brian Fletcher, however, made up the ground on the final stretch and, two strides from the finishing post, pipped the tiring Crisp to win by three-quarters of a length in what is often considered one of the greatest Grand Nationals in history.[3][4] Crisp's jockey Richard Pitman later stated: "I still dream about that race, of Crisp running so strongly and jumping so fearlessly, and then the sound of Red Rum's hooves as he got closer and closer at the end."[15] He added: "I felt as though I was tied to a railway line with an express train thundering up and being unable to jump out of the way."[16] A year later, Red Rum retained his title at the 1974 National, carrying 12 stone.[17] (He followed that with victory in the Scottish Grand National, and remains the only horse to win both in the same season.)

Red Rum came second in 1975 and 1976; Tommy Stack replaced Fletcher as jockey in the last race after Fletcher angered trainer Ginger McCain by telling the press the horse no longer felt right after a defeat in a race away from Aintree. Again, Red Rum saved his best for Aintree but was held off by Rag Trade. The following year, Stack rode the 12-year-old Red Rum to his record third Grand National triumph, in what is regarded as one of the greatest moments in horse racing history.[12][14]

Red Rum was prepared for a sixth attempt at the Grand National the season following his 1977 win, but suffered a hairline fracture the day before the 1978 race and was subsequently retired.[14]

However, he had become a national celebrity, opening supermarkets and annually leading the Grand National parade for many further years. His likeness graced playing cards, mugs, posters, models, paintings, plates and jigsaw puzzles. Several books have been written about Red Rum by his trainer, sculptor, jockeys and author Ivor Herbert; a children's story about his life was also written by Christine Pemberton. The horse helped open the Steeplechase rollercoaster at Blackpool Pleasure Beach in 1977. He also switched on the Blackpool Illuminations in that year.[18] In 1975, a song entitled "Red Rum" was issued as a tribute to him by a group named Chaser, on Polydor 2058 564. It was written by Steve Jolley, Richard Palmer and Tony Swain. In 2010 the name of the racecourse bar, formerly called "The Sefton", was changed to "The Red Rum".

In 1977 Red Rum appeared as a studio guest at the BBC Sports Personality of the Year awards ceremony. Viewers were delighted when the horse seemed to recognise the voice of his jockey Tommy Stack, who was appearing by video link from another location.[19] 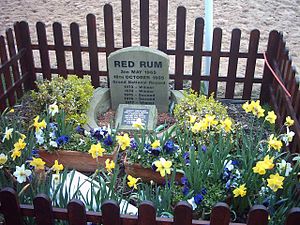 Red Rum's feats, of three Nationals and two seconds, are legendary. They will never be equalled, let alone surpassed. They say records are there to be broken, but Red Rum’s at Aintree is one which will stand the test of time.

He was buried at the winning post of the Aintree Racecourse, which is still a destination for his fans. The epitaph reads "Respect this place / this hallowed ground / a legend here / his rest has found / his feet would fly / our spirits soar / he earned our love for evermore".[15]

Eleven years after his death, a survey found he remained the best-known racehorse in the UK.[20] When asked to name an equine animal, Red Rum was named by 45% of Britons, with Black Beauty in second with 33%.[20] In 2002 the UK public voted Red Rum's third Grand National win #24 in the list of the 100 Greatest Sporting Moments.[5]

In the early 1970s, the future running of the Grand National was uncertain.[1] The emergence of Red Rum and his historic triumphs captivated the nation, and ensured huge public support for the fund to buy Aintree and put it in the hands of the Jockey Club.[1] 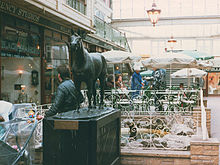