In Chinese and other Asian societies, a red envelope, red packet, lai see or hongbao is a monetary gift which is given during holidays or special occasions such as weddings, graduation or the birth of a baby. Outside of China, similar customs exist across parts of South East Asia and many other countries with a sizable ethnic Chinese population.

Red envelopes are gifts presented at social and family gatherings such as weddings or holidays such as Chinese New Year. The red color of the envelope symbolizes good luck and is supposed to ward off evil spirits. The act of requesting red packets is normally called tao hongbao (Chinese: 討紅包; pinyin: tǎo hóngbāo) or yao lishi (Chinese: 要利是; pinyin: yào lì shì), and in the south of China, lai see (Chinese: 逗利是; pinyin: dòu lì shì; Cantonese Yale: dau6 lei6 si6). Red envelopes are usually given out by married couples to single people, regardless of age.

The amount of money contained in the envelope usually ends with an even digit, in accordance with Chinese beliefs; odd-numbered money gifts are traditionally associated with funerals. Still in some regions of China and in its diaspora community, odd-numbers are favored for weddings because they are difficult to divide. There is also a widespread tradition that money should not be given in fours, or the number four should not appear in the amount, such as in 40, 400 and 444, as the pronunciation of the word "four" is homophonous to the word "death". (See Numbers in Chinese culture).

At weddings, the amount offered is usually intended to cover the cost of the attendees as well as signify goodwill to the newlyweds.

During the Chinese New Year, mainly in Southern China, red envelopes are typically given by the married to the unmarried, most of whom are children. Students and future students in the sciences are typically rewarded handsomely. The amount of money is usually notes to avoid heavy coins and to make it difficult to judge the amount inside before opening. It is traditional to put brand new notes inside red envelopes and also to avoid opening the envelopes in front of the relatives out of courtesy.

The contemporary usage of red envelopes have seen the adoption of digital technologies such as mobile applications, with businesses competing for a share of the new consumer market.[1][2] 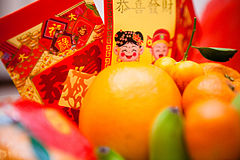 In China, during the Qin Dynasty, the elderly would thread coins with a red string. The money was referred to as "money warding off evil spirits" (Chinese: 壓歲錢; pinyin: yāsuì qián) and was believed to protect the person of younger generation from sickness and death.[citation needed] The yasui qian was replaced by red envelopes when printing presses became more common and is now found written using the homophone for suì that means "old age" instead of "evil spirits" thus, "money warding off old age" (Chinese: 壓歲錢; pinyin: yāsuì qián). Red envelopes continue to be referred to by such names today.

There are several legends as to how the red envelope came to be and became prevalent in China. One story depicts a village where a demon was terrorizing the people at night, in most cases children were the victims. The belief was that the demon was touching the children's head while they were asleep and this would cause the children to become deathly ill or may even result in death. As the theory continued to linger within the village, a worried couple decided to protect their new born child by praying to their god for protection. In return, their god sent eight fairies to protect the new born child from the demon. In order to trick the demon, the fairies disguised themselves as eight coins and were placed under the child's pillow at night to protect the child. At night the demon supposedly approached to touch the child on the head when the eight coins began to shine so bright that it prohibited the demon to see. Frightened from what had just happened, the demon ran away in terror. After hearing this story, the villagers began spreading the word and gave out red envelopes filled with coins to be placed under their pillow at night. At first the red envelopes were only given to children during the Spring Festival, but as time progress they were given to anyone. By giving these red envelopes it would bring good luck and prosperity to the one receiving it. It would also prevent any evil spirits from contacting them throughout the year until the next Spring Festival.

Other similar traditions also exist in other countries in Asia. In Thailand, Myanmar (Burma) and Cambodia, the Chinese diaspora and immigrants have introduced the culture of red envelopes.

In Cambodia, Red envelopes are called Ang Pav or Tae Ea. Ang Pav is delivered with best wishes from the elders to younger. The money amount in Ang Pav both makes young children happy and is the most important gift which reflects, traditionally, the best wishes and as symbol of good luck for the elders. Ang Pav can be presented in the day of Chinese New Year or “Saen Chen”, when relatives gather together. The gift is well kept as worships in or under the pillowcase, or somewhere else, especially near the bed of young while they are sleeping in New Year time. Gift in Ang Pav can be money or cheque, and more or less according to the charity of the donors. The tradition of Ang Pav delivery traditionally descended from one generation to other generations for long time ago. Ang Pav will not be given to some one in family who has got job, but he/she has to, in return, deliver it his/her parents or/and their younger. At weddings, the amount offered is usually intended to cover the cost of the attendees as well as help the newly married couple.

In Vietnam, red envelopes are lucky money and are typically given to children. They are generally given by the elders and adults, where a greeting offering health and longevity is exchanged by the young. Common greetings include "Sống lâu trăm tuổi", "An khang thịnh vượng" (安康興旺), "Vạn sự như ý" (萬事如意) and Sức khỏe dồi dào, which all relate back to the idea of wishing health and prosperity as everyone in Vietnam ages on the Lunar New Year. The typical name for lucky money is lì xì or, less commonly, mừng tuổi.

In Korea and Japan, a monetary gift called is given to children by their relatives during the new year period. In Japan, however, white envelopes are used instead of red, with the name of the receiver written on its obverse. A similar practice, Shūgi-bukuro, is observed for Japanese weddings, but the envelope is folded rather than sealed, and decorated with an elaborate bow.

In the Philippines, Chinese Filipinos exchange red envelopes (termed ang pao) during the Lunar New Year, of which it is an easily recognisable symbol. The red envelope has gained wider acceptance among non-Chinese Filipinos, who have appropriated the custom for other occasions such as birthdays, and in giving monetary aguinaldo during Christmas.

Red packets as a form of bribery in China's film industry were revealed in 2014's Sony hack.[3]

Malay Muslims in Malaysia, Brunei, Indonesia, and Singapore have adapted the Chinese custom of handing out monetary gifts in envelopes as part of their Eid al-Fitr[citation needed] (Malay: Hari Raya Aidilfitri) celebrations, but instead of red packets, green envelopes are used. Customarily a family will have (usually small) amounts of money in green envelopes ready for visitors, and may send them to friends and family unable to visit. Green is used for its traditional association with Islam, and the adaptation of the red envelope is based on the Muslim custom of sadaqah, or voluntary charity. While present in the Qur'an, sadaqah is much less formally established than the sometimes similar practice of zakat, and in many cultures this takes a form closer to gift-giving and generosity among friends than charity in the strict sense, i.e. no attempt is made to give more to guests "in need", nor is it as a religious obligation as Islamic charity is often viewed.