In Great Britain, Italy and Ireland, numbers have decreased drastically in recent years. This decline is associated with the introduction by humans of the eastern grey squirrel (Sciurus carolinensis) from North America,[3][4] In addition, habitat loss is a factor.[5] Due to this, without conservation the species could disappear from those shores within a generation.

Unlike some other rodents, the Eurasian red squirrel is not a direct threat to humans.[6] 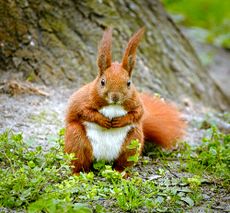 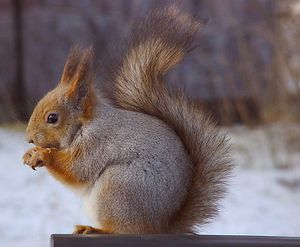 Profile of the Eurasian red squirrel in grey winter coat

The long tail helps the squirrel to balance and steer when jumping from tree to tree and running along branches, and may keep the animal warm during sleep.[citation needed]

The red squirrel, like most tree squirrels, has sharp, curved claws to enable it to climb and descend broad tree trunks, thin branches and even house walls. Its strong hind legs enable it to leap gaps between trees. The red squirrel also has the ability to swim.[7]

The coat of the red squirrel varies in colour with time of year and location. There are several different coat colour morphs ranging from black to red. Red coats are most common in Great Britain; in other parts of Europe and Asia different coat colours co-exist within populations, much like hair colour in some human populations. The underside of the squirrel is always white-cream in colour. The red squirrel sheds its coat twice a year, switching from a thinner summer coat to a thicker, darker winter coat with noticeably larger ear-tufts (a prominent distinguishing feature of this species) between August and November. A lighter, redder overall coat colour, along with the ear-tufts (in adults) and smaller size, distinguish the Eurasian red squirrel from the American eastern grey squirrel.[8][9][10] 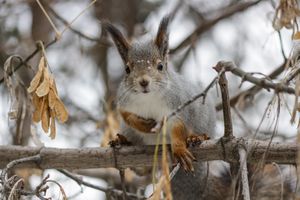 Red squirrels occupy boreal, coniferous woods in northern Europe and Siberia, preferring Scots pine, Norway spruce and Siberian pine. In western and southern Europe they are found in broad-leaved woods where the mixture of tree and shrub species provides a better year round source of food. In most of the British Isles and in Italy, broad-leaved woodlands are now less suitable due to the better competitive feeding strategy of introduced grey squirrels.[11] 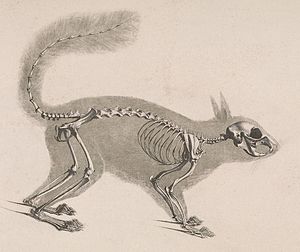 Skeleton of a squirrel

Mating can occur in late winter during February and March and in summer between June and July. Up to two litters a year per female are possible. Each litter usually contains three or four young although as many as six may be born. Gestation is about 38 to 39 days. The young are looked after by the mother alone and are born helpless, blind and deaf and weigh between 10 and 15 g. Their body is covered by hair at 21 days, their eyes and ears open after three to four weeks, and they develop all their teeth by 42 days. Juvenile red squirrels can eat solids around 40 days following birth and from that point can leave the nest on their own to find food; however, they still suckle from their mother until weaning occurs at 8 to 10 weeks.

During mating, males detect females that are in œstrus by an odor that they produce, and although there is no courtship, the male will chase the female for up to an hour prior to mating. Usually multiple males will chase a single female until the dominant male, usually the largest in the group, mates with the female. Males and females will mate multiple times with many partners. Females must reach a minimum body mass before they enter œstrus, and heavy females on average produce more young. If food is scarce breeding may be delayed. Typically a female will produce her first litter in her second year. 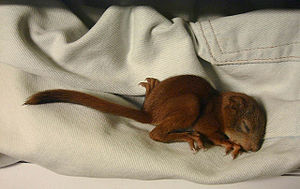 Red squirrels that survive their first winter have a life expectancy of 3 years. Individuals may reach 7 years of age, and 10 in captivity. Survival is positively related to availability of autumn–winter tree seeds; on average, 75–85% of juveniles die during their first winter, and mortality is approximately 50% for winters following the first.[12]

A red squirrel takes and loses a walnut

The red squirrel is found in both coniferous forest and temperate broadleaf woodlands. The squirrel makes a drey (nest) out of twigs in a branch-fork, forming a domed structure about 25 to 30 cm in diameter. This is lined with moss, leaves, grass and bark. Tree hollows and woodpecker holes are also used. The red squirrel is a solitary animal and is shy and reluctant to share food with others. However, outside the breeding season and particularly in winter, several red squirrels may share a drey to keep warm. Social organization is based on dominance hierarchies within and between sexes; although males are not necessarily dominant to females, the dominant animals tend to be larger and older than subordinate animals, and dominant males tend to have larger home ranges than subordinate males or females.[13]

Although more rarely, red squirrels may also eat bird eggs or nestlings. A Swedish study shows that out of 600 stomach contents of red squirrels examined, only 4 contained remnants of birds or eggs.[15][16] Thus, red squirrels may occasionally exhibit opportunistic omnivory, similarly to other rodents.

Excess food is put into caches, either buried or in nooks or holes in trees, and eaten when food is scarce. Although the red squirrel remembers where it created caches at a better-than-chance level, its spatial memory is substantially less accurate and durable than that of grey squirrel;[17] it therefore will often have to search for them when in need, and many caches are never found again.

Between 60% and 80% of its active period may be spent foraging and feeding.[18] The active period for the red squirrel is in the morning and in the late afternoon and evening. It often rests in its nest in the middle of the day, avoiding the heat and the high visibility to birds of prey that are dangers during these hours. During the winter, this mid-day rest is often much more brief, or absent entirely, although harsh weather may cause the animal to stay in its nest for days at a time.

No territories are claimed between the red squirrels, and the feeding areas of individuals overlap considerably. 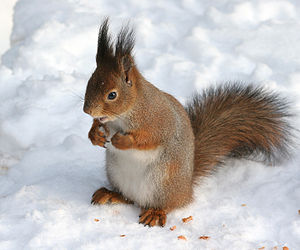 In snow in Helsinki

Arboreal predators include small mammals such as the pine marten, wild cats, and the stoat, which preys on nestlings; birds, including owls and raptors such as the goshawk and buzzards, may also take the red squirrel. The red fox, cats and dogs can prey upon the red squirrel when it is on the ground. Humans influence the population size and mortality of the red squirrel by destroying or altering habitats, by causing road casualties, and by introducing non-native populations of the North American eastern grey squirrels.

In UK as a whole, due to the above circumstances, the population has today diminished to 160,000 red squirrels or less (120,000 of these reside in Scotland).[22] Outside the UK and Ireland, the impact of competition from the eastern grey squirrel has been observed in Piedmont, Italy, where two pairs escaped from captivity in 1948. A significant drop in red squirrel populations in the area has been observed since 1970, and it is feared that the eastern grey squirrel may expand into the rest of Europe. 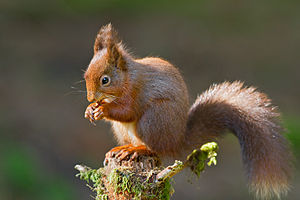 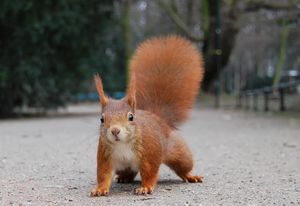 The red squirrel is protected in most of Europe, as it is listed in Appendix III of the Bern Convention; it is listed as being of least concern on the IUCN Red List. However, in some areas it is abundant and is hunted for its fur.

Although not thought to be under any threat worldwide, the red squirrel has nevertheless drastically reduced in number in the United Kingdom; especially after the grey squirrels were introduced from North America in the 1870s. Fewer than 140,000 individuals are thought to be left in 2013;[14] approximately 85% of which are in Scotland, with the Isle of Wight being the largest haven in England. A local charity, the Wight Squirrel Project,[23] supports red squirrel conservation on the island, and islanders are actively recommended to report any invasive greys. The population decrease in Britain is often ascribed to the introduction of the eastern grey squirrel from North America,[24] but the loss and fragmentation of its native woodland habitat has also played a role.

In January 1998, eradication of the non-native North American grey squirrel began on the North Wales island of Anglesey. This facilitated the natural recovery of the small remnant red squirrel population. It was followed by the successful reintroduction of the red squirrel into the pine stands of Newborough Forest.[25] Subsequent reintroductions into broadleaved woodland followed and today the island has the single largest red squirrel population in Wales. Brownsea Island in Poole Harbour is also populated exclusively by red rather than grey squirrels (approximately 200 individuals). 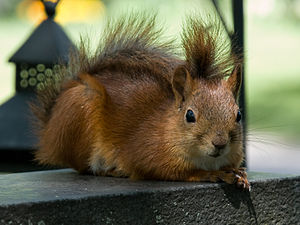 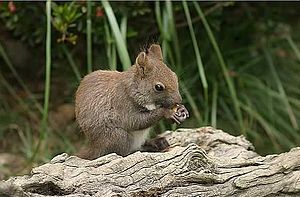 With a brown coat

Mainland initiatives in southern Scotland and the north of England also rely upon grey squirrel control as the cornerstone of red squirrel conservation strategy. A local programme known as the "North East Scotland Biodiversity Partnership", an element of the national Biodiversity Action Plan was established in 1996.[26] This programme is administered by the Grampian Squirrel Society, with an aim of protecting the red squirrel; the programme centres on the Banchory and Cults areas. In 2008, the Scottish Wildlife Trust announced a four-year project which commenced in the spring of 2009 called "Saving Scotland's Red Squirrels".[27]

Other notable projects include red squirrel projects in the Greenfield Forest, including the buffer zones of Mallerstang, Garsdale and Widdale;[28] the Northumberland Kielder Forest Project; and within the National Trust reserve in Formby. These projects were originally part of the Save Our Squirrels campaign that aimed to protect red squirrels in the north of England, but now form part of a five-year Government-led partnership conservation project called "Red Squirrels Northern England"[29] to undertake grey squirrel control in areas important for red squirrels. 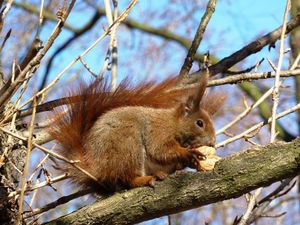 During October 2012, four male and one female red squirrel, on permanent loan from the British Wildlife Centre, were transported to Tresco in the Isles of Scilly by helicopter, and released into Abbey Wood, near the Abbey Gardens. Only two survived and a further twenty were transported and released in October, 2013.[31] Although the red squirrel is not indigenous to the Isles of Scilly, those who supported this work intend to use Tresco as a ″safe haven″ for the endangered mammal as the islands are free of predators such as foxes, and of the squirrel pox carrying grey squirrel.[32][33] 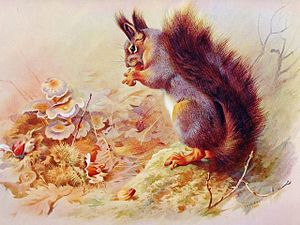 "Squirrel" illustration from "British Mammals" by A. Thorburn, 1920

Squirrel Nutkin is a character, always illustrated as a red squirrel, in English author Beatrix Potter's books for children.

'Ekorren' (The Red Squirrel) is a well known and appreciated children's song in Sweden. Text and lyrics by Alice Tegnér in 1892.

In Norse mythology, Ratatoskr is a red squirrel who runs up and down with messages in the world tree, Yggdrasil, and spreads gossip. In particular, he carried messages between the unnamed eagle at the top of Yggdrasill and the wyrm Níðhöggr beneath its roots.

The red squirrel used to be widely hunted for its pelt. In Finland squirrel pelts were used as currency in ancient times, before the introduction of coinage.[34] The expression "squirrel pelt" is still widely understood there to be a reference to money.

The Rareware character Conker the Squirrel is a red squirrel. 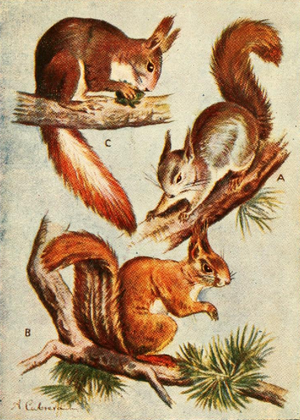 There have been over 40 described subspecies of the red squirrel, but the taxonomic status of some of these is uncertain. A study published in 1971 recognises 16 subspecies and has served as a basis for subsequent taxonomic work.[35][36] At present, there are 23 recognized subspecies.[2]

S. vulgaris is classed as a "prohibited new organism" under New Zealand's Hazardous Substances and New Organisms Act 1996 preventing it from being imported into the country.[38]