From Infogalactic: the planetary knowledge core
Jump to: navigation, search
Not to be confused with Crimson Tide and pink tide.
Further information: Harmful algal bloom 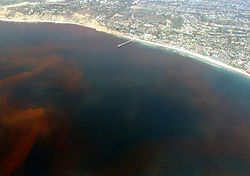 A red tide off the coast of La Jolla San Diego, California.

Red tide is a common name for a phenomenon known as an algal bloom (large concentrations of aquatic microorganisms) when it is caused by a few species of dinoflagellates and the bloom takes on a red or brown color. Red tides are events in which estuarine, marine, or fresh water algae accumulate rapidly in the water column, resulting in coloration of the surface water. It is usually found in coastal areas. It kills many manatees every year.[1]

These algae, known as phytoplankton, are single-celled protists, plant-like organisms that can form dense, visible patches near the water's surface. Certain species of phytoplankton, dinoflagellates, contain photosynthetic pigments that vary in color from green to brown to red.

When the algae are present in high concentrations, the water appears to be discolored or murky, varying in color from purple to almost pink, normally being red or green. Not all algal blooms are dense enough to cause water discoloration, and not all discolored waters associated with algal blooms are red. Additionally, red tides are not typically associated with tidal movement of water, hence the preference among scientists to use the term algal bloom.

Some red tides are associated with the production of natural toxins, depletion of dissolved oxygen or other harmful effects, and are generally described as harmful algal blooms. The most conspicuous effects of these kinds of red tides are the associated wildlife mortalities of marine and coastal species of fish, birds, marine mammals, and other organisms. 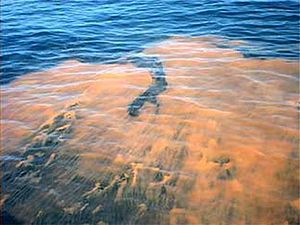 Red tides in the Gulf of Mexico are a result of high concentrations of Karenia brevis, a microscopic marine algae that occurs naturally but normally in lower concentrations. In high concentrations, its toxin paralyzes the central nervous system of fish so they cannot breathe. Dead fish have been observed to wash up on gulf beaches of Mexico and Texas.[2] Dense concentrations appear as discolored water, often reddish in color. It is a natural phenomenon, but the exact cause or combination of factors that result in a red tide outbreak are unknown.[3] Red tide causes economic harm and for this reason red tide outbreaks are carefully monitored. For example, the Florida Fish and Wildlife Conservation Commission provides an up-to-date status report on the red tide in Florida.[4] Texas also provides a current status report.[5]

The debate over the cause of red tides is controversial. Red tides occur naturally off coasts all over the world. Not all red tides have toxins or are harmful.[10]

Red tide is a colloquial term used to refer to one of a variety of natural phenomena known as harmful algal blooms or HABs. The term red tide specifically refers to blooms of a species of dinoflagellate known as Karenia brevis.[11] It is sometimes used to refer more broadly to other types of algal blooms as well.

The term red tide is being phased out among researchers for the following reasons:

The term red tide is most often used in the United States of America to refer to Karenia brevis blooms in the eastern Gulf of Mexico, also called the Florida red tide. These blooms occur almost annually along Florida waters. The density of these organisms during a bloom can exceed tens of millions of cells per litre of seawater, and often discolor the water a deep reddish-brown hue.

The term red tide is also sometimes used to describe harmful algal blooms on the northern east coast of the United States, particularly in the Gulf of Maine. This type of bloom is caused by another species of dinoflagellate known as Alexandrium fundyense. These blooms of organisms cause severe disruptions in fisheries of these waters as the toxins in these organism cause filter-feeding shellfish in affected waters to become poisonous for human consumption due to saxitoxin.[12] The related Alexandrium monilatum is found in subtropical or tropical shallow seas and estuaries in the western Atlantic Ocean, the Caribbean Sea, the Gulf of Mexico and the eastern Pacific Ocean.

The occurrence of red tides in some locations appears to be entirely natural (algal blooms are a seasonal occurrence resulting from coastal upwelling, a natural result of the movement of certain ocean currents)[13][14] while in others they appear to be a result of increased nutrient loading from human activities.[15] The growth of marine phytoplankton is generally limited by the availability of nitrates and phosphates, which can be abundant in agricultural run-off as well as coastal upwelling zones. Coastal water pollution produced by humans and systematic increase in sea water temperature have also been implicated as contributing factors in red tides[citation needed]. Other factors such as iron-rich dust influx from large desert areas such as the Saharan desert are thought to play a major role in causing red tides.[16] Some algal blooms on the Pacific coast have also been linked to occurrences of large-scale climatic oscillations such as El Niño events. While red tides in the Gulf of Mexico have been occurring since the time of early explorers such as Cabeza de Vaca,[17] it is unclear what initiates these blooms and how large a role anthropogenic and natural factors play in their development. It is also debated whether the apparent increase in frequency and severity of algal blooms in various parts of the world is in fact a real increase or is due to increased observation effort and advances in species identification methods.[18][19]