Redditch, is a town and local government district in north-east Worcestershire, England, approximately 15 miles (24 km) south of Birmingham. The district had a population of 84,300 in 2011.[3] In the 19th century it became the international centre for the needle and fishing tackle industry. At one point 90% of the world's needles were manufactured in the town and its neighbourhoods.[4] In the 1960s it became a model for modern new town planning. It is known locally by the nickname The Ditch.[1] 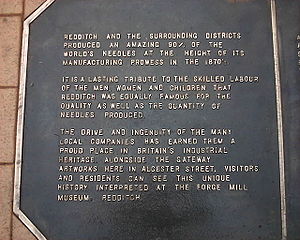 The first recorded mention of Redditch ("Red-Ditch", thought to be a reference to the red clay of the nearby River Arrow) is in 1348, the year of the outbreak of the Black Death. During the Middle Ages it became a centre of needle-making and later prominent industries were fish-hooks, fishing tackle, motorcycles and springs, the last of which was notably undertaken by Herbert Terry and Sons. Redditch was designated a new town in 1964 and the population increased dramatically[when?] from 32,000 to around 77,000. Housing developments such as Church Hill, Matchborough, Winyates, Lodge Park and Woodrow were created to accommodate a large overspill from the industrially expanding Birmingham. Redditch was built as a "flagship" town using new methods and new town planning: all the main roads (mostly new dual carriageways as well as a ring road for the town centre) were banked to reduce noise to the new housing estates, and the whole of Redditch was landscaped.

By the 21st century needle-making and other traditional industries had been replaced by modern light industry and services, with Redditch also functioning as a dormitory town for Birmingham. The automotive retailer Halfords and engineering giant GKN both have their headquarters in Redditch. Manufacturer of precious metal contacts Samuel Taylor Ltd has manufacturing plants within the town. Following the redevelopment of the flagship Kingfisher Shopping Centre in 2002 Redditch is undergoing an economic and cultural renaissance.

The town is home to several historical sites. The National Needle Museum and the ruins of Bordesley Abbey are located in the Abbey Ward district, and the remains of a medieval moated settlement called Moons Moat are within the Church Hill estate.

The parliamentary constituency of Redditch is represented by Karen Lumley of the Conservatives, who defeated the Labour incumbent and former Home Secretary Jacqui Smith in the 2010 General Election.[5]

Redditch has a Borough Council with councillors elected from the Wards of Redditch.

Redditch is in Worcestershire, just south of the West Midlands urban area. It is 15 miles (24 km) north of Evesham on the A435, which skirts it to the east. The main access routes are the A441 via junction 2 of the M42 Motorway, the A435 from junction 3 of the M42 and the A448 via junctions 4 or 5 of the M5. The Roman Road known as Icknield Street is prominent, running north to south through the eastern side of the town.

Redditch has an oceanic climate (Köppen climate classification Cfb) similar to almost all of the United Kingdom.

The Borough of Redditch is divided into several districts. To the east of the town are "New Town Districts" built in the 1970s and 1980s. To the west of the Borough are older "Former Village Districts" that dominate the south and west.

Located in the heart of England, Redditch is an ideal point of departure for destinations in the surrounding region. The M42 motorway is a short drive away and it is linked by dual carriageways and A-class roads to surrounding towns such as Bromsgrove and Evesham. There are regular bus services to Studley, Bromsgrove, Catshill and Birmingham.

The Cross-City Line provides a regular train service via Birmingham New Street to Lichfield Trent Valley. Redditch railway station, the southern terminus of the line, was first opened as the terminus of the Redditch Railway on 19 September 1859, alongside what is now Clive Road. This first station stayed until 4 May 1868 when the last section from Alcester to Redditch of the Redditch and Evesham Railway was closed, at which point a second station was built alongside the junction of Bromsgrove Road and Plymouth Road. This station was provided with a standard Midland Railway design and two platforms. The current station, built in 1993, offers little more than a ticket office and a store. 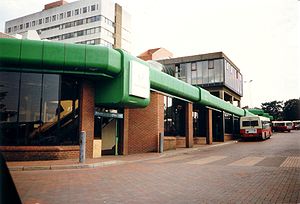 The former Redditch Bus Station, circa 1996

There is an extensive network of local bus services run by Diamond and other operators (including Stagecoach, Johnsons Excel Bus and a community run bus). Many services run from the bus station in the town centre, a postcard of which was voted Britain's most boring postcard in a competition run by the photographer Martin Parr. The bus station was rebuilt as part of the 2002 shopping centre expansion.

Some areas of Redditch have dedicated bus routes; however, there have been issues with safety on these routes and 3 children have died over the past 15 years.

Redditch is occasionally noted for its confusing road system dominated by a system of dual carriageways built when it became a New Town, including the only cloverleaf interchange in England at the junction of the A441 and the Bromsgrove-bound A448. The system is designed to allow rapid flow of large volumes of traffic around the various districts and into the town centre, whilst keeping fast moving vehicles separated from residential streets. Due to the self-similar appearance of the road layout, some drivers find it disorientating, although the story of an elderly couple admitted to hospital with severe dehydration after spending more than sixty hours trying to navigate the highway system is an urban legend. Redditch was briefly famous (via The Graham Norton Show) for a tongue-in-cheek calendar featuring its "picturesque" roundabouts created by a local printing company. The calendar was called, unsurprisingly, 'Roundabouts of Redditch' and it proved so successful that it sparked a national series. This self-similar pattern is found on a smaller scale in many of the modern estates in the town, which follow a Radburn style of planned community.

Redditch is one of the few areas of the country where the three-tier system system of first, middle and high schools still exists. Students attend first school from the age of 4, middle school from the age of 9, and secondary school at the age of 13. Other areas of Worcestershire adopted this system at the same time as Redditch (in the 1970s), but many have reverted to the traditional 5-7 infant, 7-11 junior and 11-16/18 secondary schools.

Heart of Worcestershire College (often referred to locally as "HOW College") is a large general further education college: one of its three campuses is in central Redditch; the other two are in Bromsgrove and Worcester.

Since June 2013 the swimming pool at Abbey Stadium leisure centre has been heated using waste heat diverted from Redditch Crematorium. Redditch Borough Council expects the scheme to reduce the leisure centre's gas bill by more than 40%, equivalent to an annual saving of about £15,000.[7]

Malcolm Bradbury's novel The History Man, which was dramatised by the BBC in 1981, contained a reference to Redditch when Flora Beniform, a sociologist, mentioned to the hero Howard Kirk that she was studying an outbreak of troilism in Redditch. It is also sometimes reported as being mentioned in the John Cooper Clarke song, 'Burnley', however Reddish is the more likely interpretation.

Rik Mayall's Kevin Turvey — The Man Behind The Green Door was set and filmed in Redditch.

The 2012 film Sightseers is partly set in Redditch.[8]

Redditch is featured in a section heading in An Utterly Impartial History of Britain by John O'Farrell.[9]

Birmingham and national TV comedian Jasper Carrott makes Redditch a repeated butt of his jokes, for example over the difficulty of escaping the Redditch ring road.[10]

There is thriving listed theatre in Redditch called the Palace Theatre. 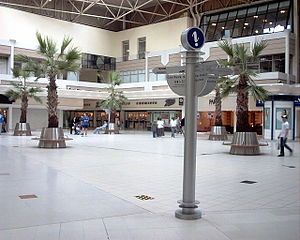 Kingfisher Shopping Centre was opened in 1976 by the then Prime Minister James Callaghan and now forms the town's primary retail centre.

The centre has over 1,100,000 square feet (100,000 m2) of retail space,[11] with stores like Debenhams, Primark, Next plc, Marks and Spencers, Argos, Boots UK, H&M, The Perfume Shop and Warren James Jewellers. It is one of the largest covered shopping centres in the United Kingdom. In 2007, a cinema opened on the new upper floor. 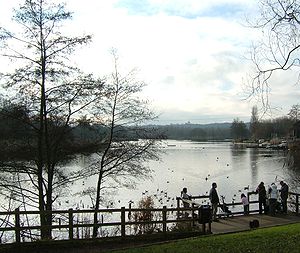 Redditch has 900 acres (3.6 km2) of public open space in Arrow Valley Country Park. This incorporates the 30-acre (120,000 m2) Arrow Valley Lake, fed by the River Arrow. The park incorporates a Local Nature Reserve, Proctor's Barn Meadow.[12] The Arrow Valley Countryside centre, opened in 2000 in the Country Park, has a lakeside café, gift shop and an interactive exhibition. The lake is also used for water sports. There are four waymarked trails for walking and cycling around the lake and through the Country Park. There is a skate park in the south of the park with walks along the river Arrow through the Country Park to the Forge Mill Museum in the north. There are interactive events and family activities at the Countryside Centre and a comprehensive children's play area.

Redditch was the home of the Royal Enfield motorcycle. This is where the main factory of the original company was located and the business continued manufacturing until the 1960s, the last model being the Interceptor. The Redditch factory was closed in 1967 and production was moved to the Bradford on Avon factory, which closed in 1970, ending English Enfield manufacturing. In the mid 1950s, the company established a partner, Madras Motors, in Madras, India, who manufactured the Bullet 350 model. The Indian factory is still very successful, with new Indian models and has taken Royal Enfield into its third century of manufacturing. Some of the original factory buildings in Redditch still remain, most are in a derelict state and can be seen from Hewell Road. Some buildings have been taken over and now make the old part of Enfield Industrial Estate close to the town centre on Hewell Road.

In 1956 Redditch was twinned with Auxerre in Burgundy, France. This twinning proved sufficiently popular to form an organisation named The Friends of Auxerre (FoA). At the beginning of June each year the coupling of these two towns is officially celebrated.

In 1986 Redditch was twinned with Mtwara in Tanzania. Frequent events are organised with assistance from the community of Tanzanian students at Birmingham University and Selly Oak College.