Redistribution of income and wealth 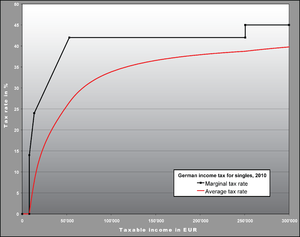 Redistribution tax policy should not be confused with predistribution of wealth, where the lower and middle classes pay higher net effective tax percentage rates, as the elite pay regressive tax rates. Itemized deductions, often called tax loopholes, tend to perpetuate predistrubution preferences in lieu of implementing a neutral tax system, such as a flat tax. Many alternate taxation proposals have been floated without the political will to alter the status quo. The proposed "Buffett Rule" is a hybrid taxation model, a compromise of opposing systems, intended to minimize the favoritism of the special interest tax design.

The effects of a redistribution system are actively debated on ethical and economic grounds. The subject includes analysis of its rationales, objectives, means, and policy effectiveness.[2][3] A 2003 survey among 264 members of the American Economic Association found that 71.2% of them support redistribution, while 20.4% oppose it, 7.2% had mixed feelings.[4]

In ancient times, this was known as a Palace economy.[5] These economies were centrally based around the administration, so the dictator or pharaoh had both the ability and the right to say who did(and did not) get special treatment.

Another early form of wealth redistribution occurred in the early American colonies under the leadership of William Bradford.[6] Bradford records in his diary that this "common course"[6] bred confusion, discontent, distrust, and the colonists looked upon it as a form of slavery.[7]

Different types of economic systems feature varying degrees of interventionism aimed at redistributing income, depending on how unequal their initial distributions of income are. Free-market capitalist economies tend to feature high degrees of income redistribution. However, Japan's government engages in much less redistribution because its initial wage distribution is much more equal than Western economies. Likewise, the socialist planned economies of the former Soviet Union and Eastern bloc featured very little income redistribution because private capital and land income - the major drivers of income inequality in capitalist systems - was virtually nonexistent; and because the wage rates were set by the government in these economies.[8]

Two other common types of governmental redistribution of income are subsidies and vouchers (such as food stamps). These transfer payment programs are funded through general taxation, but benefit the poor, who pay fewer or no taxes. While the persons receiving transfers from such programs may prefer to be directly given cash, these programs may be more palatable to society than cash assistance, as they give society some measure of control over how the funds are spent.[9]

The difference between the Gini index for the income distribution before taxation and the Gini index after taxation is an indicator for the effects of such taxation.[citation needed]

Wealth redistribution can be implemented through land reform that transfers ownership of land from one category of people to another, or through inheritance taxes or direct wealth taxes. Before-and-after Gini coefficients for the distribution of wealth can be compared.

The objectives of income redistribution are to increase economic stability and opportunity for the less wealthy members of society and thus usually include the funding of public services.

One basis for redistribution is the concept of distributive justice, whose premise is that money and resources ought to be distributed in such a way as to lead to a socially just, and possibly more financially egalitarian, society. Another argument is that a larger middle class benefits an economy by enabling more people to be consumers, while providing equal opportunities for individuals to reach a better standard of living. Seen for example in the work of John Rawls,[citation needed] another argument is that a truly fair society would be organized in a manner benefiting the least advantaged, and any inequality would be permissible only to the extent that it benefits the least advantaged.

Some proponents of redistribution argue that capitalism results in an externality that creates unequal wealth distribution.[10]

Some[who?] argue that wealth and income inequality are a cause of economic crises, and that reducing these inequalities is one way to prevent or ameliorate economic crises, with redistribution thus benefiting the economy overall. This view was associated with the underconsumptionism school in the 19th century, now considered an aspect of some schools of Keynesian economics; it has also been advanced, for different reasons, by Marxian economics. It was particularly advanced in the US in the 1920s by Waddill Catchings and William Trufant Foster.[11][12] There is currently a great debate concerning the extent to which the world's extremely rich have become richer over recent decades. Thomas Piketty's Capital in the Twenty-First Century is at the forefront, critiqued in certain publications such as The Economist.[13]

Peter Singer's argument contrasts to Thomas Pogge's in that he states we have an individual moral obligation to help the poor.[14][15] 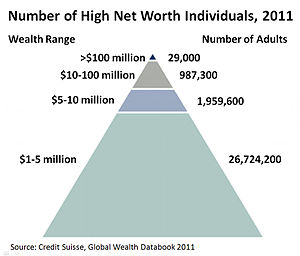 Using statistics from 23 developed countries and the 50 states of the US, British researchers Richard G. Wilkinson and Kate Pickett show a correlation between income inequality and higher rates of health and social problems (obesity, mental illness, homicides, teenage births, incarceration, child conflict, drug use), and lower rates of social goods (life expectancy, educational performance, trust among strangers, women's status, social mobility, even numbers of patents issued per capita), on the other.[17] The authors argue inequality leads to the social ills through the psychosocial stress, status anxiety it creates.[18]

A 2011 report by the International Monetary Fund by Andrew G. Berg and Jonathan D. Ostry found a strong association between lower levels of inequality and sustained periods of economic growth. Developing countries (such as Brazil, Cameroon, Jordan) with high inequality have "succeeded in initiating growth at high rates for a few years" but "longer growth spells are robustly associated with more equality in the income distribution."[19][20]

Public choice theory states that redistribution tends to benefit those with political clout to set spending priorities more than those in need, who lack real influence on government.[21]

The socialist economists John Roemer and Pranab Bardhan criticize redistribution via taxation in the context of Nordic-style social democracy, highlighting its limited success at promoting relative egalitarianism and its lack of sustainability. They point out that social democracy requires a strong labor movement to sustain its heavy redistribution, and that it is unrealistic to expect such redistribution to be feasible in countries with weaker labor movements. They point out that, even in the Scandinavian countries, social democracy has been in decline since the labor movement weakened. Instead, Roemer and Bardham argue that changing the patterns of enterprise ownership and market socialism, obviating the need for redistribution, would be more sustainable and effective at promoting egalitarianism.[22]

Marxian economists argue that social democratic reforms - including policies to redistribute income - such as unemployment benefits and high taxes on profits and the wealthy create more contradictions in capitalism by further limiting the efficiency of the capitalist system via reducing incentives for capitalists to invest in further production.[23] In the Marxist view, redistribution cannot resolve the fundamental issues of capitalism - only a transition to a socialist economy can.