Reel Big Fish is an American ska punk band from Huntington Beach, California, best known for the 1997 hit "Sell Out". The band gained mainstream recognition in the mid-to-late 1990s, during the third wave of ska with the release of the gold certified album Turn the Radio Off. Soon after, the band lost mainstream recognition but gained an underground cult following. As of 2006, the band is no longer signed to a major record label, and has since been independent. After many line-up changes throughout the years, front man Aaron Barrett remains the only founding member in the band.

The band started as a Led Zeppelin Cover Band until they released a demo in 1992 which is now called "In The Good Old Days". At the time, their band name was "The Fischer King". With the departure of Ben Guzman, then backup vocalist Aaron Barrett took his place as lead singer. The band then changed their genre to ska.

Reel Big Fish's self-released debut album, Everything Sucks, was successful and became an underground hit spread by word-of-mouth, which led to the band signing a deal with Mojo Records.[1] In August 1996, the band released the album Turn the Radio Off on the new label, which appealed to fans of ska punk style, and the band began touring throughout the United States. After the single "Sell Out" became well known in mainstream venues, including MTV, the album peaked at number 57 on the Billboard charts, staying on the charts for 32 weeks.[2] However, the ska revival was short-lived, and their 1998 album Why Do They Rock So Hard? failed to match the sales of the band's previous record. In 1998, the band appeared in the movie BASEketball, performing in the stands to rouse the crowd. The band also collaborated on the soundtrack with a cover of a-ha's "Take On Me". Why Do They Rock So Hard? was the last album for two members of the band. Trombonist Grant Barry was fired for his conduct, culminating with him committing battery on a security guard at Mississippi Nights during a concert in St. Louis and drummer Andrew Gonzales left the team to spend more time with his family.

Trumpet player Tavis Werts left the band in 2001.[3] The band fared much better on the rock charts in 2002 with their album, Cheer Up!, particularly because of the single "Where Have You Been?" which did not include the horn section. Former Suburban Rhythm drummer Carlos de la Garza and ex-Spring Heeled Jack U.S.A. trumpeter Tyler Jones, who tracked for two songs on Cheer Up! (because Werts had already done the majority of recording before his departure), were brought in. De la Garza's last concert with Reel Big Fish was on June 20, 2003 at the House of Blues in Anaheim, California. That concert was later released as a DVD in the The Show Must Go Off! series. Jones appeared in the Music Videos for Where Have You Been? and Monkey Man, and continued to play live in Reel Big Fish until early 2005. He was replaced by trumpeter John Christianson (nicknamed Johnny Christmas), who had played with Barrett in The Forces of Evil.

On April 5, 2005, Reel Big Fish released their fourth album on Mojo, We're Not Happy 'Til You're Not Happy. Justin Ferreira (who replaced De La Garza) was on drums for the recording, but left before the album's release to join the Orange County band Takota and subsequently is listed as an additional musician on the CD. He was replaced by Ryland Steen.

Compared to the previous album (Cheer Up!), which was more lighthearted and cheerful, Allmusic describes the songs in We're Not Happy 'Til You're Not Happy as "angry" and "embittered", but also deemed the album as "super catchy". Common themes expressed throughout the songs include jealousy, regret, short-lasting fame, and disappointment toward mainstream record companies.

While on tour in early 2006, Reel Big Fish were dropped from the Jive Records label.[5] The band formed their own label and released a 3-disc live performance CD/DVD set, Our Live Album Is Better Than Your Live Album. This package became available on July 18, 2006 on the Internet and in retail stores on August 22. Jive later released a Reel Big Fish greatest hits album, Greatest Hit...And More, because they owned the rights to all previous songs. The band did not approve of, or make any money from the album, and have spoken out against it.

On February 20, 2007, the band released Duet All Night Long, which is a split EP with Zolof the Rock & Roll Destroyer. It features six cover songs (three from each band), with the vocalist of each band performing in the other band's songs (except in the case of Scott Klopfenstein singing in the song, "Say Say Say".)

Reel Big Fish released their first studio album since leaving Jive Records; Monkeys for Nothin' and the Chimps For Free worldwide on July 10, 2007, on the Rock Ridge Music record label. On June 26, 2007, shortly before its release, the band announced in a Myspace blog that Matt Wong was leaving the band to spend more time with his wife and newborn child. He was replaced by Derek Gibbs who played bass in Jeffries Fan Club and Aaron Barrett's now defunct side project, The Forces Of Evil. Since Matt Wong was very popular with fans, some were skeptical of the new bassist's ability, but the band has stated that Derek is "Matt Wong Approved" and fans have nothing to worry about. Gibbs had been filling in for Wong on various tours since early 2002.

Reel Big Fish released a new studio album on January 20, 2009.[7] The name of the album is Fame, Fortune and Fornication, and it consists of 10 cover songs.[8] Another album, A Best of Us for the Rest of Us, featuring a 22-track disc of re-recorded songs and a 14-track disc of "Skacoustic" versions produced by lead singer Aaron Barrett, was released on July 20, 2010.[9] An extended version of the album, A Best of Us for the Rest of Us (Bigger Better Bonus Deluxe Version), was released on June 21, 2011. They also intend to work on a new album, recording new songs in the fall of 2010.[10] The band has also recorded a live DVD at The Grove in Anaheim, California, on January 4, 2009; which was released on July 21, 2009 with the title Reel Big Fish Live! In Concert![11] In an interview with 'The Examiner', Aaron Barrett stated that he planned on releasing a new album, with all new material, in late 2011. Also in an interview with 'Rewritethescene.com', Aaron has stated interest in a Holiday album.[12]

On January 11, 2011, the band announced that longtime member Scott Klopfenstein would be leaving the band to focus on raising a family.[13] Matt Appleton of Goldfinger began filling in for Scott on the band's 20th Anniversary Tour, and he has since been announced as a permanent replacement. This marks the first time since 1995 that the band has had a saxophone player.[14]

On October 21, 2013 the band announced on their website that long-time trombonist Dan Regan, who has played with Reel Big Fish since 1994, will depart from the band to spend more time with his family and follow his dream of starting a brewery.[18]

Reel Big Fish announced a co-headline UK and Ireland tour with Less than Jake with support from Zebrahead in early 2014.[19]

In November of 2014, Reel Big Fish announced on Facebook that they would release a new ep entitled "Happy Skalidays" scheduling release in December 15, 2014.

In February of 2015, the band explained through their website that drummer Ryland Steen is on hiatus from the band to play drums in America. Since the summer of 2014, Edward Larsen of Suburban Legends has been filling in. 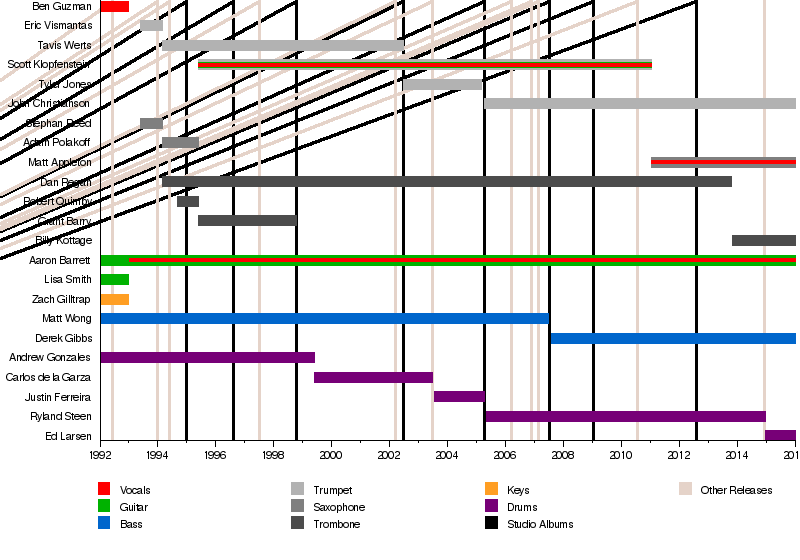