From Infogalactic: the planetary knowledge core
Jump to: navigation, search
File:PunchDizzyReformBill.png
Contemporary cartoon of Disraeli outpacing Gladstone at The Derby, parodying the perceived victor in debates in a split Liberal-led Commons while Disraeli's fellow Conservative, Lord Derby led as Prime Minister from the House of Lords.

The Representation of the People Act 1867, 30 & 31 Vict. c. 102 (known informally as the Reform Act of 1867 or the Second Reform Act) was a piece of British legislation that enfranchised part of the urban male working class in England and Wales for the first time.

Before the Act, only one million of the seven million adult males in England and Wales could vote; the Act immediately doubled that number. Moreover, by the end of 1868 all male heads of household were enfranchised as a result of the end of compounding of rents. However, the Act introduced only a negligible redistribution of seats. The overall intent was to help the Conservative Party, yet it resulted in their loss of the 1868 general election.

For the decades after the Great Reform Act of 1832, cabinets, in that era leading from both Houses, had resisted attempts to push through further reform, and in particular left unfulfilled the six demands of the Chartist movement. After 1848, this movement declined rapidly,[1] and elite opinion began to change[citation needed]. It was thus only 28 years after the initial, quite modest, Great Reform Act that leading politicians thought it prudent to introduce further electoral reform. John Russell attempted this in 1860, but the Prime Minister, a fellow Liberal, Lord Palmerston was against any further electoral reform. When Palmerston died in 1865, however, the floodgates for reform were opened.

The Union victory in the American Civil War in 1865 emboldened the forces in Britain that demanded more democracy and public input into the political system, to the dismay of the upper class landed gentry who identified with the US Southern States planters and feared the loss of influence and a popular radical movement. Influential commentators included Walter Bagehot, Thomas Carlyle, Anthony Trollope and John Stuart Mill.[2]

In 1866, Prime Minister Earl Russell (as John became) introduced a Reform Bill. It was a cautious bill, which proposed to enfranchise "respectable" working men, excluding unskilled workers and what was known as the "residuum", those seen by MPs as the "feckless and criminal" poor. This was ensured by a £7 householder qualification,[clarification needed] which had been calculated to require an income of 26 shillings a week [n 1]. This entailed two "fancy franchises," emulating measures of 1854, a £10 lodger qualification for the boroughs, and a £50 savings qualification in the counties. Liberals claimed that 'the middle classes, strengthened by the best of the artisans, would still have the preponderance of power'.[citation needed]

When it came to the vote, however, this bill split the Liberal Party: a split partly engineered by Benjamin Disraeli, who incited those threatened by the bill to rise up against it. On one side were the reactionary conservative Liberals, known as the Adullamites; on the other were pro-reform Liberals who supported the Government. The Adullamites were supported by Tories and the liberal Whigs were supported by radicals and reformists.

The bill was thus defeated and the Liberal government of Russell resigned.

Birth of the Act

The Conservatives formed a ministry on 26 June 1866, led by Lord Derby as Prime Minister and Disraeli as Chancellor of the Exchequer. They were faced with the challenge of reviving Conservatism: Palmerston, the powerful Liberal leader, was dead and the Liberal Party split and defeated. Thanks to manoeuvring by Disraeli, Derby's Conservatives saw an opportunity to be a strong, viable party of government; however, there was still a Liberal majority in the House of Commons.

By this time the attitude of many in the country had ceased to be apathetic regarding reform of the House of Commons. Huge meetings especially the 'Hyde Park riots' and the feeling that many of the skilled working class were respectable had persuaded many that there should be a Reform Bill. However, wealthy Conservative MP Lord Cranborne[n 2] resigned his government ministry in disgust at the bill's introduction.

The Reform League, agitating for universal suffrage, became much more active and organized demonstrations of hundreds of thousands of people in Manchester, Glasgow and other towns. Though these movements did not normally use revolutionary language like some Chartists had in the 1840s, they were powerful movements. The high point came when a demonstration in May 1867 in Hyde Park was banned by the government. Thousands of troops and policemen were prepared, but the crowds were so huge that the government did not dare to attack. The Home Secretary, Spencer Walpole, was forced to resign. 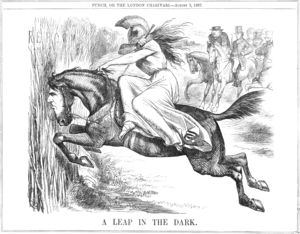 Faced with the possibility of popular revolt going much further, the government rapidly included into the bill amendments which enfranchised far more people. Consequently, the bill was more far-reaching than any Members of Parliament had thought possible or really wanted; Disraeli appeared to accept most reform proposals so long as they did not come from William Ewart Gladstone. An amendment tabled by the opposition (but not Gladstone himself) trebled the new number eligible to vote under the bill, yet Disraeli simply accepted it. The bill enfranchised most men who lived in urban areas. The final proposals were as follows: a borough franchise for all who paid rates in person (that is, not compounders), and extra votes for graduates, professionals and those with over £50 savings. These last "fancy franchises" were seen by Conservatives as a weapon against a mass electorate.

However, Gladstone attacked the bill; a series of sparkling parliamentary debates with Disraeli resulted in the bill being much more radical. Ironically, having been given his chance by the belief that Gladstone's bill had gone too far in 1866, Disraeli had now gone further.

The bill ultimately aided the rise of the radical wing of the Liberal Party and helped Gladstone to victory. The Act was tidied up with many further Acts to alter electoral boundaries.

Provisions of the Act

Two electoral boroughs were completely disenfranchised by the Act:

Although not part of the Act, these are listed for continuity.

The following were disenfranchised individually for corruption:

Seven English boroughs were disenfranchised by the Representation of the People (Scotland) Act 1868 the subsequent year:

The following boroughs were reduced from electing two MPs to one:

The Act created a number of new boroughs in Parliament. The following boroughs were enfranchised with one MP:

The following boroughs were enfranchised with two MPs:

In addition, the Act adjusted the representation of several existing boroughs. Salford and Merthyr Tydfil were given two MPs instead of one. Birmingham, Leeds, Liverpool and Manchester now had three MPs instead of two.

Reforms in Scotland and Ireland

The representation of Ireland remained unchanged.

Direct effects of the Act

The unprecedented extension of the franchise to all householders effectively gave the vote to the working classes, quite a considerable change. Jonathan Parry described this as a 'borough franchise revolution';[3] the traditional position of the landed gentry in parliament would no longer be assured by money, bribery and favours; but by the whims and wishes of the public. However, to blindly consider the de jure franchise extensions would be fallacious. The franchise provisions were flawed; the act did not address the issues of compounding and of not being a ratepayer in a household. The compounding of rates and rents was made illegal, after it was abolished in a bill tabled by Liberal G. Hodgkinson (this meant that all tenants would have to pay rates directly and thus qualify for the vote). The preparation of the register was still left to easily manipulated party organisers who could remove opponents and add supporters at will. The sole qualification to vote was essentially being on the register itself.

The Reform Act in fiction

Trollope's Phineas Finn is concerned almost exclusively with the parliamentary progress of the Second Reform Act: and Finn sits for one of the seven fictional boroughs that are due to be disenfranchised.