Regalia is Latin plurale tantum for the privileges and the insignia characteristic of a sovereign. 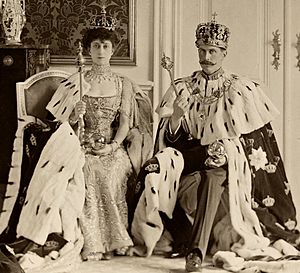 King Haakon VII and Queen Maud of Norway with their regalia.

The word stems from the Latin substantivation of the adjective regalis, "regal", itself from rex, "king". It is sometimes used in the singular, regale.[1]

Regalia in the abstract

The term can refer to rights, prerogatives and privileges enjoyed exclusively by any sovereign regardless of title (emperor, grand duke, etc.) An example is the right to mint coins, especially with one's own effigy. In many cases, especially in feudal societies and generally weak states, such rights have in time been eroded by grants to or usurpations by lesser vassals. 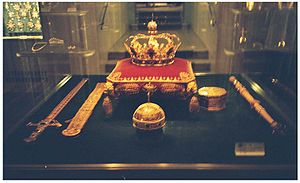 Regalia of the erstwhile kings of Bavaria, Schatzkammer, Munich

Some emblems, symbols, or paraphernalia possessed by rulers are a visual representation of imperial, royal or sovereign status. Some are shared with divinities, either to symbolize a god(ess)'s role as, say, king of the Pantheon (e.g. Brahman's sceptre) or to allow mortal royalty to resemble, identify with, or link to a divinity.

The term crown jewels is commonly used for regalia items designed to lend luster to occasions such as coronations. They feature some combination of precious materials, artistic merit, and symbolic or historical value. Crown jewels may have been designated at the start of a dynasty, accumulated through many years of tradition, or sent as tangible recognition of legitimacy by some leader such as the pope to an emperor or caliph.

Each culture, even each monarchy and dynasty within one culture, may have its own historical traditions, and some even have a specific name for its regalia, or at least for an important subset, such as:

But some elements occur in many traditions. 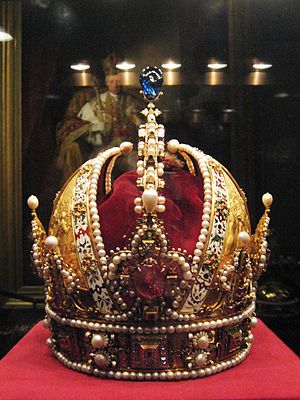 Other regal dress and jewelry

The Royal Sceptre of Boris III of Bulgaria 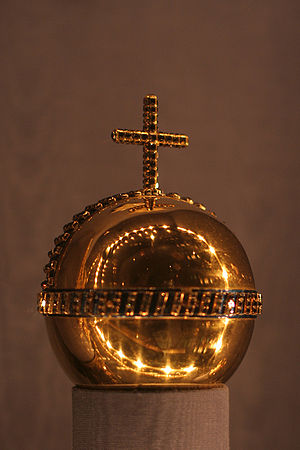 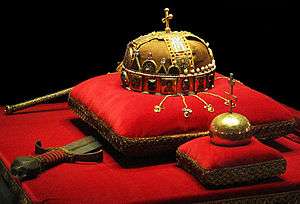 The Holy Crown of Hungary along with other regalia. 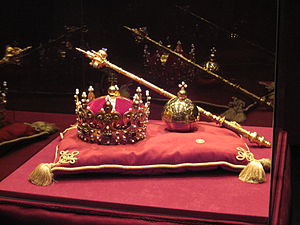 Replicas of the Crown of Bolesław I the Brave and other regalia.

Regalia can also stand for other attributes or virtues, i.e. what is expected from the holder.

Since 690, the presentation of these items to the emperor by the priests at the shrine are a central part of the imperial enthronement ceremony. As this ceremony is not public, the regalia are by tradition only seen by the emperor and certain priests, and no known photographs or drawings exist.

Some regalia objects are presented and/or used in the formal ceremonial of enthronement/coronation. They can be associated with an office or court sinecure (cfr. archoffices) that enjoys the privilege to carry, present/or at use it at the august occasion, and sometimes on other formal occasions, such as a royal funeral.

Such objects, with or without intrinsic symbolism, can include

Apart from the sovereign himself, attributes (especially a crown) can be used for close relatives who are allowed to share in the pomp. For example, in Norway the queen consort and the crown prince are the only other members of the royal family to possess these attributes and share in the sovereign's royal symbolism.

In the Roman Empire the colour Tyrian purple, produced with an extremely expensive Mediterranean mollusk extract, was in principle reserved for the Imperial Court. The use of this dye was extended to various dignitaries, such as members of the Roman senate who wore stripes of Tyrian purple on their white togas, for whom the term purpuratus was coined as a high aulic distinction.

In late Imperial China, the colour yellow was reserved for the emperor, as it had a multitude of meanings. Yellow was a symbol of gold, and thus wealth and power, and since it was also the colour that symbolized the center in Chinese cosmology (the five elements, or wu xing(五行)), it was the perfect way to refer to the emperor, who was always in the middle of the universe. Consequently, peasants and noblemen alike were forbidden to wear robes made entirely out of yellow, although they were allowed to use the colour sparingly.

The Imperial Regalia, insignia, or crown jewels (in German Reichskleinodien, Reichsinsignien, or Reichsschatz) are the regalia of the emperors and kings of the Holy Roman Empire. The most important parts are the Imperial Crown, the Holy Lance and the Imperial Sword. Today they are kept at the Schatzkammer Treasury in the Hofburg palace in Vienna, Austria.

During the late Middle Ages, the word Imperial Regalia (Reichskleinodien) had many variations in the Latin language. The regalia were named in Latin: insignia imperialia, regalia insignia, insignia imperalis capellae quae regalia dicuntur and other similar words.

Academic dress is a traditional form of clothing for academic settings, primarily tertiary (and sometimes secondary) education, worn mainly by those who have been admitted to a university degree (or similar), or hold a status that entitles them to assume them (e.g., undergraduate students at certain old universities). It is also known as academicals and, in the United States, as academic regalia.

By analogy, the term regalia is also applied to formal insignia in other contexts, such as academic regalia.

For other meanings, such as the generalization of the term to all decorations or insignia indicative of a lower office (such as a chain of office) or of membership in an order or society;