From Infogalactic: the planetary knowledge core
Jump to: navigation, search
This article is about the sport of boat racing. For the outdoor clothing brand, see Regatta (clothing). For the album, see Reggatta de Blanc. For the saloon car, see Fiat Regata. 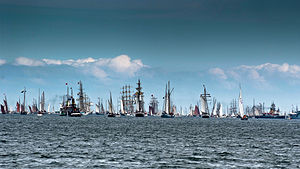 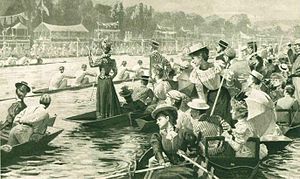 Rowing, by Lucien Davis, 1898.
File:Vanderbilt starting line.jpg
A view from the Race Committee boat at the start of Vanderbilt Sailing Club's annual SAISA regatta in 2005. 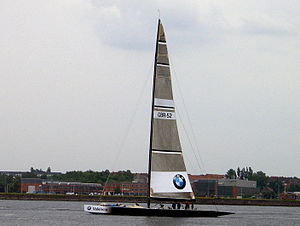 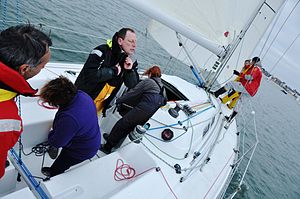 A team during a regatta (Lorient, France).

A regatta is a series of boat races. The term typically describes racing events of rowed or sailed water craft, although some powerboat race series are also called regattas. A regatta often includes social and promotional activities which surround the racing event, and except in the case of boat type (or "class") championships, is usually named for the town or venue where the event takes place.

Although regattas are typically amateur competitions, they are usually formally structured events, with comprehensive rules describing the schedule and procedures of the event. Regattas may be organized as championships for a particular area or type of boat, but are often held just for the joy of competition, camaraderie, and general promotion of the sport.

Sailing race events are typically held for a single class (a single model of boat, such as the Islander 36) and usually last more than one day. Regattas may be hosted by a yacht club, sailing association, town or school as in the case of the UK's National School Sailing Association and Interscholastic Sailing Association (high school) regattas or Intercollegiate Sailing Association (college) regattas. Currently, The Three Bridge Fiasco, conducted by the Singlehanded Sailing Society of San Francisco Bay with more than 350 competitors is the largest sailboat race in the United States.

One of the largest and most popular rowing regattas is the Henley Royal Regatta held on the River Thames, England. One of the largest and oldest yachting regattas in the world is Cowes Week, which is held annually by the Royal Yacht Squadron in Cowes, England, and usually attracts over 900 sailboats. Cowes Week is predated by the Cumberland Cup (1775), Port of Dartmouth Royal Regatta (1822) and Port of Plymouth Regatta (1823). North America's oldest regatta is the Royal St. John's Regatta held on Quidi Vidi Lake in St. John's, Newfoundland every year since 1818. 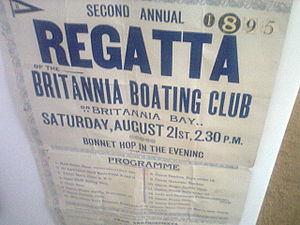