From Infogalactic: the planetary knowledge core
Jump to: navigation, search
This article is about the town. For the educational method, see Reggio Emilia approach. For the city in southern Italy, see Reggio Calabria. For the basketball club "GrissinBon Reggio Emilia", see Pallacanestro Reggiana.

Reggio Emilia ([ˈreddʒo eˈmiːlja], also [ˈrɛddʒo]; Emilian: Rèz, Latin: Regium Lepidi) is a city in northern Italy, in the Emilia-Romagna region. It has about 170,000 inhabitants[1] and is the main comune (municipality) of the Province of Reggio Emilia.

listen (help·info). The inhabitants of Reggio nell'Emilia (called Reggiani) usually call their town by the simple name of Reggio. In some ancient maps the town is also named Reggio di Lombardia.

The old town has an hexagonal form, which derives from the ancient walls, and the main buildings are from the 16th–17th centuries. The comune's territory is totally on a plain, crossed by the Crostolo stream.

Though not Roman in origin, Reggio began as a historical site with the construction by Marcus Aemilius Lepidus of the Via Aemilia, leading from Piacenza to Rimini (187 BC). Reggio became a judicial administration centre, with a forum called at first Regium Lepidi, then simply Regium, whence the city's current name.

During the Roman age Regium is cited only by Festus and Cicero, as one of the military stations on the Via Aemilia. However, it was a flourishing city, a Municipium with its own statutes, magistrates and art collegia.

Apollinaris of Ravenna brought Christianity in the 1st century CE. The sources confirm the presence of a bishopric in Reggio after the Edict of Milan (313). In 440 the Reggio diocese was placed under the jurisdiction of Ravenna by Western Roman Emperor Valentinianus III. At the end of the 4th century, however, Reggio had decayed so much that Saint Ambrose included it among the dilapidated cities. Further damage occurred with the Barbarian invasions. After the deposition of Romulus Augustulus in 476 Reggio was part of Odoacer's realm. In 489 it came under Ostrogothic control; from 539 it was part of the Roman Empire (Italy), but was taken by Alboin's Lombards in 569. Reggio was chosen as Duchy of Reggio seat.

In 773 the Franks took Reggio. Charlemagne gave the bishop the authority to exercise royal authority over the city and established the diocese' limits (781). In 888 Reggio was handed over to the Kings of Italy. In 899 the Magyars heavily damaged it, killing Bishop Azzo II. As a result of this new walls were built. On October 31, 900, Emperor Louis III gave authority for the erection of a castrum (castle) in the city's centre.

In 1002 Reggio's territory, together with that of Parma, Brescia, Modena, Mantua and Ferrara, were merged into the mark of Tuscany, later held by Matilde of Canossa. 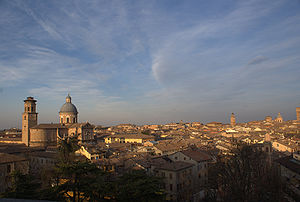 Reggio became a free comune around the end of the 11th or the beginning of the 12th century. In 1167 it was a member of the Lombard League and took part in the Battle of Legnano. In 1183 the city signed the Treaty of Konstanz, from which the city's consul, Rolando della Carità, received the imperial investiture. The subsequent peace spurred a period of prosperity: Reggio adopted new statutes, had a mint, schools with celebrated masters, and developed its trades and arts. It also increasingly subjugated the castles of the neighbouring areas. At this time the Crostolo stream was deviated westwards, to gain space for the city. The former course of the stream was turned into an avenue called Corso della Ghiara (gravel), nowadays Corso Garibaldi.

The 12th and 13th century, however, were also a period of violent internal struggle, with parties of Scopazzati (meanining -swept away from the city with brooms- these were the nobles, not very martial, apparently) and Mazzaperlini (meaning -lice killers-, the plebeians) and later those of Ruggeri and Malaguzzi, involved in bitter domestic rivalry. In 1152 Reggio also warred with Parma and in 1225 with Modena, as part of the general struggle between the Guelphs and Ghibellines. In 1260 25,000 penitents, led by a Perugine hermit, entered the city, and this event calmed the situation for a while, spurring a momentous flourishing of religious fervour. But disputes soon resurfaced, and as early as 1265 the Ghibellines killed the Guelph's leader, Caco da Reggio, and gained preeminence. Arguments with the Bishop continued and two new parties formed, the Inferiori and Superiori. Final victory went to the latter. 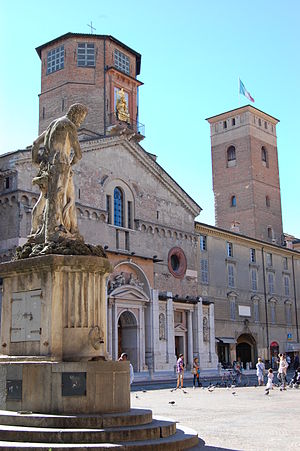 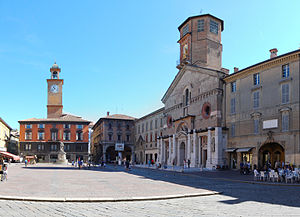 To thwart the abuses of powerful families such as the Sessi, Fogliani and Canossa, the Senate of Reggio gave the city's rule for a period of three years to the Este member Obizzo II d'Este. This choice marked the future path of Reggio under the seignory of that family, as Obizzo continued to rule de facto after his mandate has ceased. His son Azzo was expelled by the Reggiani in 1306, creating a republic ruled by 800 common people. In 1310 the Emperor Henry VII imposed Marquis Spinetto Malaspina as vicar, but he was soon driven out. The republic ended in 1326 when Cardinal Bertrando del Poggetto annexed Reggio to the Papal States.

The city was subsequently under the suzerainty of John of Bohemia, Nicolò Fogliani and Martino della Scala, who in 1336 gave it to Luigi Gonzaga. Gonzaga built a citadel in the St. Nazario quarter, and destroyed 144 houses. In 1356 the Milanese Visconti, helped by 2,000 exiled Reggiani, captured the city, starting an unsettled period of powersharing with the Gonzaga. In the end the latter sold Reggio to the Visconti for 5,000 ducats. In 1405 Ottobono Terzi of Parma seized Reggio, but was killed by Michele Attendolo, who handed the city over to Nicolò III d'Este, who therefore became seignor of Reggio. The city however maintained a relevant autonomy, with laws and coinage of its own. Niccolò was succeeded by his illegitimate son Lionello, and, from 1450, by Borso d'Este. 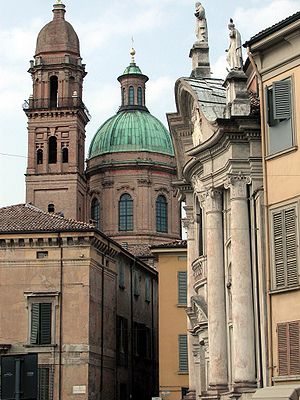 The Baroque church of San Giorgio.

Main articles: Duchy of Reggio and Duchy of Modena and Reggio

In 1452 Borso was awarded the title of Duke of Reggio and Modena by Frederick III. Borso's successor, Ercole I, imposed heavy levies on the city and named the poet Matteo Maria Boiardo, born in the nearby town of Scandiano, as its governor. Later another famous Italian writer, Francesco Guicciardini, held the same position. In 1474, the great poet Ludovico Ariosto, author of Orlando Furioso, was born in the Malaguzzi palace, near the present day townhall. He was the first son of a knight from Ferrara, who was in charge of the Citadel, and a noblewoman from Reggio, Daria Maleguzzi Valeri. As a grown man he would be sent to Reggio as governor on behalf of the dukes of Ferrara, and would spend time in a villa outside the town ("Il Mauriziano")that still stands.

In 1513 Reggio was handed over to Pope Julius II. The city was returned to the Este after the death of Hadrian VI on 29 September 1523. In 1551 Ercole II d'Este destroyed the suburbs of the city in his program of reconstruction of the walls. At the end of the century work on the city's famous Basilica della Ghiara began, on the site where a miracle was believed to have occurred. The Este rule continued until 1796, with short interruptions in 1702 and 1733–1734. 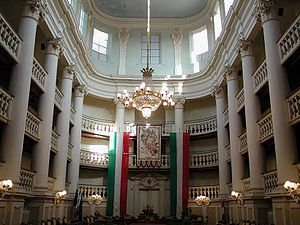 The "Tricolore's Room", in the Town Hall, is where for the first time the Italian's flag three colours were adopted. 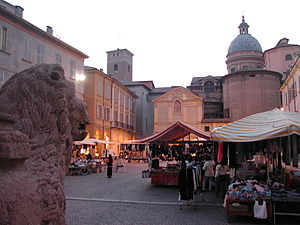 The arrival of the republican French troops was greeted with enthusiasm in the city. On 21 August 1796, the ducal garrison of 600 men was driven off, and the Senate claimed the rule of Reggio and its duchy. On 26 September, the Provisional Government's volunteers pushed back an Austrian column, in the Battle of Montechiarugolo. Though minor, this clash is considered the first one of the Italian Risorgimento. Napoleon himself awarded the Reggiani with 500 rifles and 4 guns. Later he occupied Emilia and formed a new province, the Cispadane Republic, whose existence was proclaimed in Reggio on 7 January 1797. The Italian national flag, named Il Tricolore (three-colours flag), was sewn on that occasion by Reggio women. In this period of patriotic fervour, Jozef Wybicki, a lieutenant in the Polish troops of General Jan Henryk Dąbrowski, an ally of Napoleon, composed the Mazurek Dąbrowskiego in Reggio, which in 1927 became the Polish national anthem.

The 1815 Treaty of Vienna returned Reggio to Francis IV d'Este, but in 1831 Modena rose up against him, and Reggio followed its example organizing a corps under the command of General Carlo Zucchi. However, on 9 March, the Duke conquered the city with his escort of Austrian soldiers. 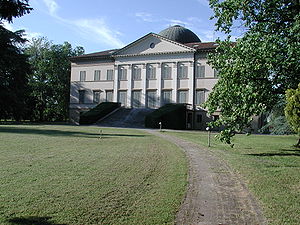 Villa Levi (a department of the University of Bologna).

In 1848 Duke Francis V left his state fearing a revolution and Reggio proclaimed its union with Piedmont. The latter's defeat at the Novara brought the city back under the Este control. In 1859 Reggio, under dictator Luigi Carlo Farini, became part of the united Italy and, with the plebiscite of 10 March 1860, definitively entered the new unified Kingdom.

Reggio then went through a period of economic and population growth from 1873 to the destruction of the ancient walls. In 1911 it had 70,000 inhabitants. A strong socialist tradition grew. On 7 July, the city hosted the 13th National Congress of the Italian Socialist Party. On 26 July 1943, the fascist régime's fall was cheered with enthusiasm by the Reggiani. Numerous partisan bands were formed in the city and surrounding countryside.

Jews began arriving Reggio in the early 15th century. Many Jews were Sephardim from Spain, Portugal and other parts of Italy. Nearly all were fleeing religious persecution. The Jewish community was prosperous and enjoyed considerable growth for the next several hundred years. After the Napoleonic era the Jews of Reggio gained emancipation and began to migrate to other parts of Europe looking for greater economic and social freedom. Thus, the Jewish community in Reggio began to decline. The German occupation during World War II and the Holocaust hastened the decline. Today, only a handful of Jewish families remain in Reggio. However, a functioning synagogue and burial ground still exist.

The economy of the province of Reggio Emilia was for a long time based on agriculture. One typical product, world-wide known and imitated, is Parmigiano-Reggiano cheese. Another is Lambrusco wine. In the twentieth century Reggio Emilia and its territory saw also a rapid development of small industries, particularly in the sector of mechanics for agriculture. A few of those industries became large companies, with an international market: Lombardini Motori, Landini.
Reggio Emilia is also the place of some fashion groups of various range and importance, since the last half of the twentieth century; the Max Mara clothing line is headquartered in the city. Another well-established branch is ceramic tiles industry (mainly in the district of Scandiano and Casalgrande).
New developments in mechanics and information technology are at the origin of some new companies operating in mechatronics.
Since more than 100 years, a strong tradition supports building and banking cooperatives, as well as consumers'cooperatives. The industrial growth has attracted immigration from North and Central Africa, East Europe, and Far East (China, Pakistan, India). The immigration rate in the province is about 25%. Researches on the quality of life[8] indicate that in recent years Reggio Emilia is in very good position among Italian provinces.

Reggio Emilia railway station, opened in 1859, forms part of the Milan–Bologna railway. It is also a terminus of three secondary railways, linking Reggio Emilia with Ciano d'Enza, Guastalla and Sassuolo, respectively. The station is situated at Piazza Guglielmo Marconi, at the eastern edge of the city centre. 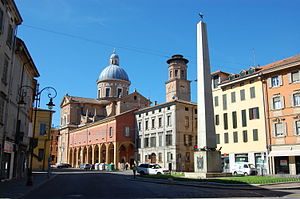 Palaces and other buildings

Reggio Emilia is twinned with: