Regia Anglorum (A term used by early writers in Latin texts, meaning Kingdoms of the English [people]) is a Medieval reenactment organisation reenacting the life and times of the peoples who lived in and around the Islands of Britain from the time of Alfred the Great to Richard the Lionheart. Its members portray Anglo-Saxon, Viking, Norman and British living history from the period 950-1066.[1] The society has gained in popularity as a result of being featured in television programmes such as Michael Wood on Beowulf (BBC Four, 2009).[2]

It was founded in 1986 by members formerly of The Norse Film and Pageant Society (aka 'The Vikings') and has a large British membership. An unincorporated association, it claims to be one of the largest Early Middle Ages re-enactment societies in the world. The organisation is currently composed of 41 Local Groups, most within the UK and some in North America.

Regia Anglorum is an Associate Sponsor of the British Museum, and is a founder member of the National Association of Re-enactment Societies and The Battlefields Trust.

The most high-profile of Regia Anglorum's activities is the Wychurst Project.[3] On 3 acres (12,000 m2) of freeheld land in Kent, the group is building a permanent site. It is a full-scale replica of a defended manorial burgh and the flooded ring ditch and bank surmounted by 220 metres of palisade encloses an acre. The Longhall is complete, secure and weatherproof and at 60' x 30' x 30'[4] (approx 20 x 10 x 10 metres) is by far the largest building of its kind in Britain. Gatehouses are under construction, two small cottages are already in use and further structures are planned in an ongoing development programme.

The site is used for educational purposes and is open for public visits, but Regia Anglorum says it does not aim to make a profit from it. The primary purpose of the settlement is to enable the group's members to experience the lifestyle of the period in a more complete way than ever before. The site, known as "Wychurst" (AS, "the village in the wood"), is situated in woods adjacent to Wildwood Discovery Park 60 miles (97 km) from Central London near Canterbury in Kent.

Living history encampments are a major feature of most re-enactment societies. A range of tented structures is erected at every Regia Anglorum event, and members demonstrate a variety of crafts and everyday activities in their historical context. 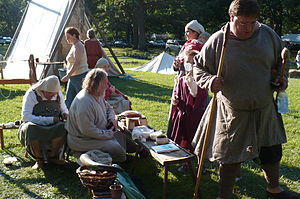 Regia Anglorum currently owns seven vessels. The biggest is a 50' sea going vessel currently under repair. Next are three similar hulls measuring 47' by 9' in the beam. Drawing about 3', they are suitable for use on inland waters and at sea in coastal waters. A 35' wooden replica is currently in use and sees constant use by the members for events and filmwork. They also own and operate two 20' smallcraft, one a generic shape for European waters, the other a replica of the Gokstad Faering and that too is in constant use at events throughout the UK in the course of a year.

Like most large reenactment groups, Regia Anglorum's activities include participation in local and national reenactment and reconstruction events such as the Battle of Hastings which usually occurs in October. A National Training Scheme exists to ensure authenticity and safety at these events.

Members of Regia frequently appear as extras in film and television, and members have appeared in over a hundred separate works to date, from serious documentaries such as National Geographic's series about the Staffordshire Hoard, Michael Wood's "Beowulf", Blood of the Vikings, 1066: The Battle for Middle Earth and A History of Britain six separate appearances on "Time Team", and even the children's well known "Blue Peter" on four occasions to adverts and music videos.

Regia has two teams of riders: "The Radfolc" and "The Conroi". These are funded by members themselves. The military wing - The Conroi - are to be seen increasingly at re-enactment events all over the UK.

The society funds its activities primarily through membership and events fees. It also provides facilities for school visits at many of its events. There are also teams and individuals who provide a school visitor service. Principally, their work mostly takes place in a Primary context under Key Stage Two - "Invaders" but can also expand on the Battle of Hastings theme at the beginning of KS3.