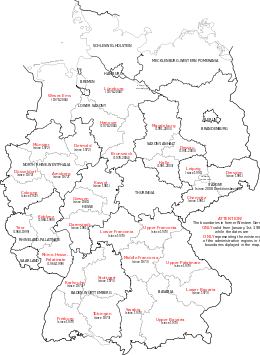 Regierungsbezirke as from 1 August 2008. The map also shows the former RBs of Lower Saxony, Rhineland-Palatinate, Saxony-Anhalt and Saxony

Regierungsbezirk (pronounced [ʁeˈɡiːʁʊŋsbəˈt͡sɪʁk], abbreviated Reg.-Bez.) is an administrative region on federal state level in Germany. The regional authority is called Regierungspräsidium or Bezirksregierung (District Government) and headed by a Regierungspräsident (District President).

The Regierungsbezirke do not pass any legislation. Within the federal state authority, they act as a mid-level agency mostly concerned with administrative decisions on a regional level for the affiliated districts.[1]

Regierungsbezirk is variously translated as "governmental district"[2] and "administrative district".[3][4]

The first Regierungsbezirke were established in the course of the Prussian reforms between 1808 and 1816, when the Kingdom of Prussia divided its provinces into 25 Regierungsbezirke. Upon the German unification of 1871, the concept was adopted by several States of the German Empire.

The Regierungsbezirke of North Rhine-Westphalia are in direct continuation of those created in the Prussian Rhine and Westphalia provinces in 1816. Other states created similar entities, named Kreishauptmannschaft (in Saxony) or Kreis (in Bavaria and Württemberg) (not to be confused with the present-day Kreis or Landkreis districts). In Nazi Germany the naming was unified to Regierungsbezirk.

On 1 January 2000 Rhineland-Palatinate disbanded its three Regierungsbezirke Koblenz, Rheinhessen-Pfalz and Trier – the employees and assets of the three Bezirksregierungen were converted into three public authorities responsible for the whole state, each covering a part of the former responsibilities of the Bezirksregierung.

On 1 January 2004, Saxony-Anhalt disbanded its three Regierungsbezirke: Dessau, Halle and Magdeburg. The responsibilities are now covered by a Landesverwaltungsamt with three offices at the former seats of the Bezirksregierungen.

Four of the new federal states re-established in 1990, Berlin, Brandenburg, Mecklenburg-Vorpommern and Thuringia, decided not to implement Regierungsbezirke. In Bremen, Hamburg, Schleswig-Holstein and Saarland they never existed.