From Infogalactic: the planetary knowledge core
Jump to: navigation, search
This article is about the Marian hymn. For the Marian title, see Queen of Heaven. For the prison in Rome, see Regina Coeli (prison). 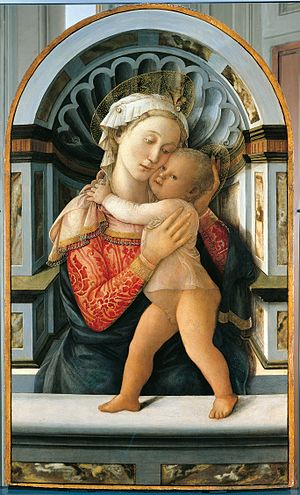 Madonna by Filippo Lippi, an example of Marian art

The Regina Cæli or Regina Cœli ("Queen of Heaven", pronounced [reˈdʒina ˈtʃeli] in ecclesiastical Latin) is an ancient Latin Marian Hymn of the Catholic Church.

It is one of the four seasonal Marian antiphons of the Blessed Virgin Mary, prescribed to be sung or recited in the Liturgy of the Hours at the conclusion of the last of the hours to be prayed in common that day, typically night prayer (Compline or Vespers). The Regina Coeli is sung or recited in place of the Angelus during the Easter season, from Holy Saturday through the Saturday after Pentecost.

As with many Roman Catholic prayers, it takes its name from its incipit or first word(s). The Latin word coelum, meaning "heaven" (whence the English word celestial), was a common medieval and early modern spelling of caelum, which was the only form in Classical Latin. In medieval Latin, ae and oe were both pronounced [eː]; the form was also influenced by an extremely dubious etymology from Greek koilos, "hollow".

While the authorship of the Regina Caeli is unknown, the hymn has been traced back to the twelfth century. It was in Franciscan use, after Compline, in the first half of the following century. According to Catholic Tradition St Gregory the Great heard angels chanting the first three lines one Easter morning in Rome, while following barefoot in a great religious procession of the icon of the Virgin painted by Luke the Evangelist. He was thereupon inspired to add the fourth line.[1]

There are plainsong melodies (a simple and an ornate form) associated with Regina Caeli, the official or "typical" melody being found in the Vatican Antiphonary, 1911, p. 126. The antiphonal strophes of Regina Caeli were often set by polyphonic composers of the 16th century. Lully's motet “Regina coeli, laetare” was written in 1684. There are three settings by the young Mozart (K.108, K.127, and K.276), and one by Brahms (Op. 37 #3).

The Marian anthems run the gamut of mediaeval literary styles, from the classical hexameters of the Alma Redemptoris Mater through the richly-rhymed accentual rhythm and regular strophes of the Ave Regina Caelorum, the irregular syntonic strophe of the Regina Caeli, to the sonorous prose rhythms with rhyming closes of the Salve Regina. "In the 16th century, the antiphons of our Lady were employed to replace the little office at all the hours" (Baudot, The Roman Breviary, 1909, p. 71).

In Anglican churches, the alternate translation (see below) is in 7.7.7.7 metre, and is usually sung to the hymn tune known as Easter Hymn, "Jesus Christ is Risen Today" or the hymn tune "Ave Virgo Virginum".

Queen of Heaven, rejoice, alleluia.
The Son whom you merited to bear, alleluia.
Has risen, as He said, alleluia.
Pray for us to God, alleluia.

Let us pray.
O God, who through the resurrection of your Son Jesus Christ
gave rejoicing to the world,
grant, we pray, that through his Mother, the Virgin Mary,
we may obtain the joy of everlasting life.
Through Christ our Lord. Amen.

Let us pray:
O God, who through the resurrection of Thy Son our Lord Jesus Christ
didst vouchsafe to give joy to the world:
grant, we beseech thee, that through His Mother, the Virgin Mary,
we may obtain the joys of everlasting life.
Through Christ our Lord. Amen.