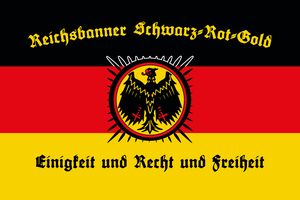 The Reichsbanner Schwarz-Rot-Gold (German: [ˈʁaɪçsˌbanɐ ˈʃvaʁts ˈʁoːt ˈɡɔlt], "Black, Red, Gold Banner of the Reich") was an organization in Germany during the Weimar Republic, formed by members of the Social Democratic Party of Germany, the German Centre Party, and the (liberal) German Democratic Party in 1924. Its goal was to defend parliamentary democracy against internal subversion and extremism from the left and right, to teach the population to respect the new Republic, to honor its flag and the constitution. Its name is derived from the Flag of Germany adopted in 1919, the colors of which were associated with liberal parliamentary democracy and the republic.

The Reichsbanner's main opponents were the Communist Party of Germany and their Rotfrontkämpferbund on the left, and the Nazi Party and their Sturmabteilung on the right.

The Reichsbanner was re-established in 1953, as Reichsbanner Schwarz-Rot-Gold, Bund aktiver Demokraten e.V. as an association for political education. 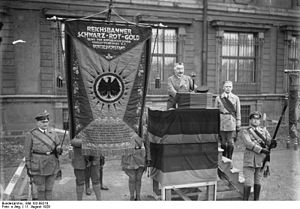 Right wing and nationalist armed groups, like the Stahlhelm or the SA, as well as the left-wing Communist Red Front Fighters had continued to radicalize and intensify the political struggle in Germany. The Reichsbanner was initially formed in reaction to the far right's "Beer Hall" Putsch and far left's Hamburg rebellion, both failed coups, which had taken place at the end of 1923. On 22 February 1924 members of the SPD, the German Centre Party, the German Democratic Party and trade unionists in Magdeburg established the Reichsbanner. However the proportion of Social Democrats in the membership clearly outweighed all others, with estimates of up to 90 per cent.

Reichsbanner was a veterans' federation, in which former soldiers of the First World War enlisted their military experience in the service of the republic. It thus saw its main task as the defense of the Weimar Republic against enemies from the National Socialist, monarchist and Communist camps. Social Democratic politician Otto Hörsing designated Reichsbanner in 1931 as a 'non-partisan protection organization of the Republic and democracy in the fight against the swastika and the Soviet star'.[2] Members saw themselves as guardians of the inheritance of Germany's democratic tradition, going back to the Revolutions of 1848, and of the constitutional national colors: black, red and gold.

In the Reichsbanner, two organizational structures existed in parallel: the political as a registered political association and the operational as a fighting force.

The political organization was headed by the Federal Administration comprising a 1st and 2nd chairman, three deputies, the federal treasurer, federal cashier, secretary, technical manager, federal youth leader, the sitting representatives and 15 assessors. The Federal Chairman was from 3 June 1932 Otto Hörsing. His deputy and later successor was Karl Höltermann. Beneath the federal level, Germany was divided up into gaus, circles, districts and finally local associations. The executive committees of all organizational levels were elected from the membership of the all republican parties in concert.

Parallel to it, the operational organization was modeled as a military structure. The smallest unit was the group, with a group leader and eight men. Two to five groups formed a platoon (Zug), two to three courses formed a Kameradschaft, which corresponded to a company of the army, between two and five of which constituted a department (Abteilung) with two to five departments making up a district. At least two districts formed a circle. At Gau and federal level operational and political level structures overlapped so that The Federal Chairman was at the same time also Federal Commander, while each of the 32 Gau chairmen was also Gauführer. The command personnel of the operational organisation were also recognized by badges of rank. The Federal Commander, for example, wore on his lower sleeve the federal eagle (black on a red field, with golden circular border) and two black-red-golden stripes over all.

According to the organization's own records, membership in 1932 was put at three million.

Following substantial Nazi electoral successes in 1930, the Reichsbanner in September sought to strengthen itself against intensified street violence by SA units with a restructuring of the operational organization. Active members were divided into master formations (Stafo) and the elite units into protection formations (Schufo). In addition there were the "Young Banners". 250,000 men belonged to the Schufos in Spring 1931.[citation needed]

On 16 December 1931, the Reichsbanner, the Workers' Gymnastic and Sporting Federation (ATSB), the General German Trade Union Federation (ADGB), and the Social Democratic Party formed the Iron Front, within which armed defensive operations were the responsibility of Reichsbanner and which became increasingly important in view of ever more intensifying acts of violence by members of the Nazi SA and the Communist Red Front (RFB).[citation needed]

The last federal general assembly of the Reichsbanner met on 17–18 February 1933 in Berlin. In March Reichsbanner and the Iron Front were banned throughout the Reich. The membership of both organizations were systematically hunted down for deportation to concentration camps and partially exterminated.[citation needed]

Following the banning of the Reichsbanner, some members joined the Stahlhelm, Bund der Frontsoldaten, which led to an incident where a mass signup in Braunschweig was raided by the Nazis, who called it the Stahlhelm Putsch.[3]

Reichsbanner members in the Resistance

In the now illegal underground organisations, the organisation's membership, in particular the former Schufos represented an important component in the Social Democratic resistance to the Nazi regime, for example the groups centred on Theodor Haubach and Karl Heinrich in Berlin and around Walter Schmedemann in Hamburg as well as the Socialist Front in Hanover.

Reichsbanner was re-formed in 1953 as an association for political education.[4]