The capital of the province was Danzig (Gdańsk) and its population without the city was 1,487,452 (in 1939). The area of the province was 26,056 km2, 21,237 km2 of which was annexed Danzig and Pomerelian territory.[1] During its short existence Poles and Jews living in this area were subjected by Nazi Germany to extermination as "subhumans".[citation needed]

The Prussian province West Prussia created from Polish territory annexed by Prussia in Partitions of Poland was dissolved in 1920, following the Treaty of Versailles. The bulk of it inhabited by Polish majority became part of the newly established Second Republic of Poland and was administered as Pomeranian Voivodship (Polish Corridor). The eastern remains of German West Prussia were attached to the Province of East Prussia as Regierungsbezirk West Prussia - a Regierungsbezirk ("government region") being a German administrative subunit of a province (Provinz) comprising several counties (Kreise). The western remains of German West Prussia were merged to the German remains of the former Province of Posen and made a new province, Posen-West Prussia.

After the Nazis came to power in Germany, they reformed the administrative system by transforming the former German provinces and states into their Gau system in 1935 as a part of their Gleichschaltung policy.

When Nazi Germany invaded Poland in September 1939, this Greater Pomeranian voivodship was first made the German military district "West Prussia",[2] and by a decree[3] of Adolf Hitler on 8 October merged with the Free City of Danzig and the East Prussian Regierungsbezirk West Prussia, to form the Reichsgau West Prussia.[4] The western remains remained outside and continued to be administered by the German Pomeranian Gau as Regierungsbezirk Grenzmark Posen-West Prussia according to the 1938 reform, while the Bromberg (Bydogoszcz) region stayed with Reichsgau West Prussia and was not attached to Reichsgau Posen, the later "Warthegau". The designation Reichsgau instead of just Gau indicates that the province primarily consisted of annexed territory. A Gauleiter of a Reichsgau was also titled Reichsstatthalter. Other Reichsgaue were e.g. Reichsgau Wartheland and Reichsgau Sudetenland.

The Reichsgau was very heterogenous, like the territory, which comprised territory of the pre-war Danzig (completely), of Germany (West Prussia Government Region) and of Poland (roughly the Pomeranian Voivodeship), the population amounted to 2,179,000 altogether, with 1,494,000 Polish citizens of mostly Polish ethnicity, 408,000 Danzig citizens of mostly German ethnicity and 277,000 German citizens of mostly German ethnicity.[5] The German occupiers considered the Danzig and Polish citizenships as naught, due to the de facto abolition of these two states. Christian Danzigers and Christian Poles of German ethnicity were granted German citizenship, Jewish Danzigers, and Jewish Poles of which ethnicity so ever were denied the German citizenship. As to Christian Danzigers and Christian Poles of Polish ethnicity the acceptance as citizens was mostly denied, but under certain circumstances granted. 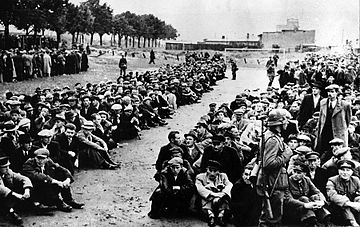 It was Nazi policy to exterminate the Polish and Jewish population of the region in several phases; the first phase of extermination was in September 1939 [6] The main Nazi responsible for genocide conducted in the Pomeranian Voivodeship was Gauleiter Albert Forster who was involved in mass murder and ethnic cleansing of Jews and ethnic Poles, while enlisting Polish citizens perceived by Nazis as descendants of Germanic settlers as Germans, often under the threat of violence. Forster personally declared that Polish people should be eradicated and stated "We have to exterminate this nation, starting from the cradle".[7][8][9]

The Reichsgau was the site of the Stutthof concentration camp and its sub camps where over 85,000 people were executed or died of illness, starvation or mistreatment. Of the 52,000 Jews who were sent to the camp only around 3,000 would survive.[10]

During the Winter of 1939/40 between 12,000 and 16,000 people were murdered at Piaśnica by Einsatzkommando 16, units of the 36th Regiment of SS, and members of the Selbstschutz, a militia force made up of Poles of German ethnicity. The local Selbstschutz, under the command of Ludolf von Alvensleben, numbered 17,667 and before their disbandment in October 1939 had killed 4,247 people.

Jews did not figure prominently among the victims in West Prussia, as the area's Jewish population was small and most had fled before the Germans arrived. However, in places where they were present, they were expelled and murdered in what was classified as "other measures" which simply meant murder.[11] In areas where Jewish families or individuals remained, a "shameful situation" was proclaimed, and Nazi authorities expected the Selbstschutz to remedy it through "direct action".[12] In August 1943 around 500 Jews from a camp in the Pomeranian Voivodeship were sent to Auschwitz, out of which 434 were immediately killed upon arrival [13] 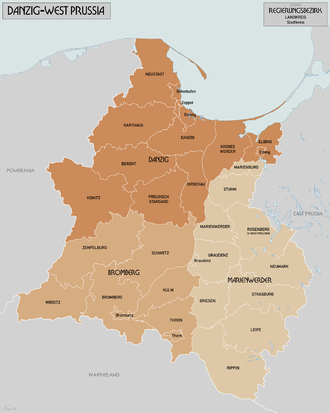 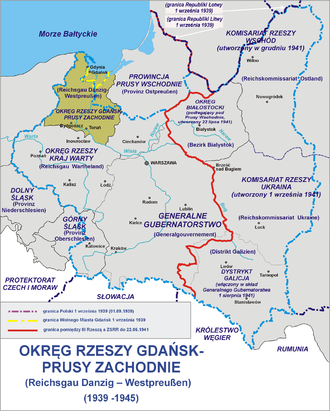 Danzig-West Prussia was divided into three government regions (Regierungsbezirk), with the name-giving capital cities of Bromberg, Danzig and Marienwerder.[4]

In 1939 the Free City of Danzig was annexed to Germany. After a brief transitional period, its territory became part of the restored Regierungsbezirk Danzig in the Reichsgau Danzig-Westpreussen (the restored Prussian Province of West Prussia) and was divided into nine districts (Kreise):

As NSDAP party leader of Danzig, Albert Forster became leader of Civil Administration in Danzig in 1939 and remained the most powerful politician of this area until 1945.

In March 1945, the region was captured by the Red Army, and the Nazi governor, Albert Forster, was later sentenced to death and executed for crimes against humanity. The German population (which included war time settlers, Nazis and military officials) either fled or was expelled.