The Reichsgau Wartheland (initially Reichsgau Posen, also: Warthegau) was a Nazi German Reichsgau formed from parts of Polish territory annexed in 1939 during World War II. It comprised the region of Greater Poland and adjacent areas. Parts of Warthegau matched the similarly named pre-Versailles Prussian province of Posen. The name was initially derived from the capital city, Posen (Poznań), and later from the main river, Warthe (Warta).

During the Partitions of Poland from 1793, the bulk of the area had been annexed by the Kingdom of Prussia until 1807 as South Prussia. From 1815 to 1849, the territory was within the autonomous Grand Duchy of Posen, which was the Province of Posen until Poland was re-established in 1918–1919 following World War I. The area is currently the Greater Poland Voivodeship.

Invasion and occupation of Poland 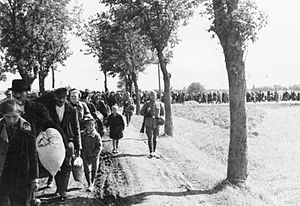 Poles led to the trains under German army escort, as part of the Nazi German ethnic cleansing of western Poland annexed to the Reich immediately following the invasion of 1939.

After the invasion of Poland, the conquered territory of Greater Poland was split between four different Reichsgaue and the General Government area (further east). The Militärbezirk Posen was created in September 1939, and on 8 October 1939 annexed by Germany, as the Reichsgau Posen, with SS Obergruppenfuhrer Arthur Greiser as the only Gauleiter. The name Reichsgau Wartheland was introduced on 29 January 1940.

The Wehrmacht established there the Wehrkreis XXI, based at Poznań, under the command of General der Artillerie Walter Petsel. Its primary operational unit was the 48th Panzer Korps, covering so-called Militärische Unterregion-Hauptsitze including Poznań, Leszno, Inowrocław, Włocławek, Kalisz, and Łódź. It maintained training areas at Sieradz and Biedrusko. The territory was inhabited predominantly by the ethnic Poles with a German minority of 16.7% in 1921, and the Polish Jews, most of whom were imprisoned at the Łódź Ghetto eventually, and exterminated at Vernichtungslager Kulmhof within the next two years.[1] 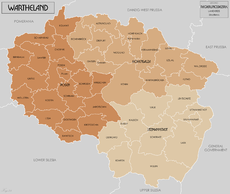 The Governor of Reichsgau Wartheland, Arthur Greiser,[2] embarked on a program of complete removal of the formerly Polish citizenry upon his nomination by Heinrich Himmler.[3] The plan also entailed the re-settling of ethnic Germans from the Baltic and other regions into farms and homes formerly owned by Poles and Jews.[4] He also authorized the clandestine operation of exterminating 100,000 Polish Jews (about one-third of the total Jewish population of Wartheland),[5] in the process of the region's complete "Germanization".[6] In the first year of World War II, some 630,000 Poles and Jews were forcibly removed from Wartheland and transported to the occupied General Government (more than 70,000 from Poznań alone) in a series of operations called the Kleine Planung covering most Polish territories annexed by Germany at about the same time.

By the end of 1940, some 325,000 Poles and Jews from the Wartheland and the Polish Corridor were expelled to General Government, often forced to abandon most of their belongings.[7] Fatalities were numerous. In 1941, the Nazis expelled a further 45,000 people, and from autumn of that year they "began killing Jews by shooting and in gas vans, at first spasmodically and experimentally."[8] Reichsgau Wartheland had the population: 4,693,700 by 1941. Greiser wrote in November 1942: "I myself do not believe that the Führer needs to be asked again in this matter, especially since at our last discussion with regard to the Jews he told me that I could proceed with these according to my own judgement."[9]

File:Die 'großzügigste Umsiedlungsaktion' with Poland superimposed, 1939.jpg
Heim ins Reich re-settlement in Warthegau. Map of the Third Reich in 1939 (dark grey) after the conquest of Poland; with pockets of German colonists brought into Reichsgau Wartheland from the Soviet "sphere of influence" – superimposed with the red outline of Poland missing entirely from the original print.[10]

By 1945 nearly half a million Germanic Volksdeutsche had been resettled in the Warthegau alone among the areas annexed by Nazi Germany while the Soviet forces began to push the retreating Nazi forces back through the Polish lands. Most German residents along with over a million colonists fled westward. Some did not, due to restrictions by Germany's own government and the quickly advancing Red Army. An estimated 50,000 refugees died from the severe winter conditions, others as war atrocities committed by Soviet military. The remaining ethnically German population was expelled to new Germany after the war ended.[11]