From Infogalactic: the planetary knowledge core
Jump to: navigation, search
"ℛℳ" redirects here. It is not to be confused with RM.

Reichsmark (help·info) (sign: ℛℳ) was the currency in Germany from 1924 until 20 June 1948 and in Austria from 1938 to 1945. The Reichsmark was subdivided into 100 Reichspfennig. The Mark is an ancient Germanic weight measure, traditionally a half pound, later used for several coins. From 1871 to 1918 Germany was called the Kaiserreich or the Deutsches Reich. Although Germany became a republic in 1919, the term "Reich" remained part of the country's official name.

The Reichsmark was introduced in 1924 as a permanent replacement for the Papiermark. This was necessary due to the 1920s German inflation which had reached its peak in 1923. The exchange rate between the old Papiermark and the Reichsmark was 1 ℛℳ = 1012 Papiermark (one trillion in both UK and US English, one billion in German and other European languages, see long and short scales). To stabilize the economy and to smooth the transition, the Papiermark was not directly replaced by the Reichsmark, but by the Rentenmark, an interim currency backed by the Deutsche Rentenbank, owning industrial and agricultural real estate assets. The Reichsmark was put on the gold standard at the rate previously used by the Goldmark, with the U.S. dollar worth 4.2 ℛℳ.

As the market crash of 1929 expanded into the Great Depression, Germany was forced to effectively take the Reichsmark off of the gold standard when it imposed exchange controls in July 1931. It retained a gold peg at that time. At the transition of Germany to National Socialist control, the Reichsmark was recruited as a financial weapon in the quest to rearm Germany. The Reichsbank turned on the printing presses to finance Adolf Hitler's jobs programs. To control inflation, severe wage and price controls were instituted, foreign currency exchange rates were manipulated, and interest rates increased. Such measures were effective for a time but by January 1939 the Reichsbank president, Hjalmar Schacht, was sounding the alarm and was summarily relieved of his post.

A number of companies were created with inadequate capital for their operations and authorized to issue bonds exchangeable at a 1:1 rate for Reichsmarks and sold at a discount. The Reichsbank rediscounted the bills of these companies creating a monetary expansion without formally renouncing the link to gold.

MEFO was a dummy company that was formed with relatively small amounts of capital that was used to finance German rearmament off the books. It issued bills without backing by its own resources but which were guaranteed redeemable at 1:1 for reichsmarks for five years by the government. The MEFO bills amounts were considered a state secret and were an important element in the impression that Hitlerian economics was a success. This company essentially created a large amount of reichsmarks off the books, inflating the currency in secret. Payment was about to come due giving Hitler the option of shifting the German economy to export goods to pay the bills or going to war and paying the debts off from looting profits extracted from conquered states.

With the unification of Germany and Austria in 1938, the Reichsmark replaced the Schilling in Austria. During the Second World War, Germany established fixed exchange rates between the Reichsmark and the currencies of the occupied and allied countries, often set so as to give the Germans economic benefits. The rates were as follows:

After the Second World War, the Reichsmark continued to circulate in Germany, but with new banknotes (Allied Occupation Marks) printed in the US and in the Soviet Zone, as well as with coins (without swastikas). In practice, massive inflation dating back to the latter stages of the war had rendered the Reichsmark nearly worthless. For all intents and purposes, it was supplanted by a barter economy (commonly, "cigarette currency"). The Reichsmark was replaced in June 1948 by the Deutsche Mark in the Trizone (three western occupation zones) and (in the Soviet Occupation Zone) later in the same year by the East German Mark (colloquially also "Ostmark", since 1968 officially "Mark der DDR") in East Germany. The 1948 currency reform under the direction of Ludwig Erhard is considered the beginning of the West German economic recovery; however, the secret plan to introduce the Deutsche Mark in the Trizone was formulated by economist Edward A. Tenenbaum of the US military government, and was executed abruptly on 21 June 1948. Three days later, the new currency also replaced the Reichsmark in the three Western sectors of Berlin. In November 1945, the Reichsmark was superseded by the Allied Military Schilling in Austria. In 1947 a local currency was introduced in the Saar.

File:Reichsmark.jpg
5-Reichsmark coins without (1936) and with (1938) the Nazi swastika 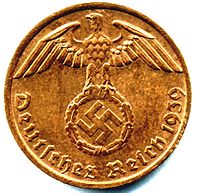 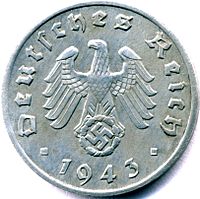 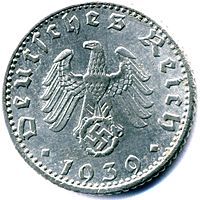 Nazi Germany had a number of mints (coin factories). Each mint location had its own identifiable letter. It is therefore possible to identify exactly which mint produced what coin by noting the mint mark on the coin. Not all mints were authorized to produce coins every year. The mints were also only authorized to produce a set number of coins with some mints allocated a greater production than others. Some of the coins with particular mint marks are therefore scarcer than others. With the silver 2 and 5 Reichsmark coins, the mint mark is found under the date on the left side of the coin. On the smaller denomination Reichspfennig coins, the mint mark is found on the bottom center of the coin.

Four Reichspfennig coins were issued in 1932 as part of a failed attempt by the Reichskanzler Heinrich Brüning to reduce prices through use of 4 Reichspfennig pieces instead of 5 Reichspfennig coins. Known as the Brüningtaler or Armer Heinrich ("poor Heinrich"), they were demonetized the following year. See Brüningtaler (German). The quality of the Reichsmark coins decreased more and more towards the end of World War II and misprints happened more frequently. This led to an increase in counterfeiting of money.

Production of silver 1 Reichsmark coins ended in 1927. In 1933, nickel 1 Reichsmark coins were introduced, and new silver 2 and 5 Reichsmark coins were introduced which were smaller but struck in .625 and .900 fineness so as to maintain the amount of silver. Between 1933 and 1939, a number of commemorative 5 Reichsmark pieces would be issued. Production of the 3 Reichsmark coin ceased altogether. In 1935, aluminium 50 Reichspfennig coins were introduced, initially for just the one year. In 1937, nickel 50 Reichspfennig coins were issued and continued to be produced up to 1939, before reverting to aluminum. From 1936 on, all coins except the 1 Reichsmark and the first version (1935–36) of the 5 Reichsmark coin (bearing the image of the late Reichspräsident Paul von Hindenburg) bore the Nazi state insignia. The eagle had two standard designs on most coin denominations, a soaring eagle and large swastika depicted on most earlier issues, and a more "aggressive" eagle with less prominent swastika which became predominant in the 1940s. From 1933 until 1948, a stylized script lettering was also adopted on all denominations as opposed to a typeface style.

During World War II, bronze and aluminium-bronze coins were replaced by zinc and aluminium, with the 2 Reichspfennig discontinued for potential of being too easily mistaken for the 10 Reichspfennig when being struck in the same metal. The 1, 2, and 5 Reichsmark coins were no longer issued, replaced instead by banknotes. Aluminium 50 Reichspfennig coins were reintroduced to replace the nickel versions. This time around they had a longer run, being produced from 1939 to 1944. Lower denominations were produced in zinc from 1940 onwards. Due to their composition, these coins had poor durability and are hard to find in very good condition. The last production of coins bearing the swastika was in 1944 (1, 5, 10, and 50 Reichspfennig) and 1945 (1 and 10 Reichspfennig only).

After the war, the Allies issued coins in relatively small numbers between 1945 and 1948:

These coins were issued with designs very similar to those minted in 1944–45, with the exception that the swastika was removed from beneath the eagle on the reverse.

The first Reichsmark banknotes were introduced by the Reichsbank and state banks such as those of Bavaria, Saxony and Baden. The first Reichsbank issue of 1924 came in denominations of 10, 20, 50, 100, and 1000 Reichsmark. This was followed by a second issue in the same denominations, dated between 1929 and 1936. A 20 Reichsmark note was introduced in 1939, using a design taken from an unissued Austrian 100 schilling banknote type. Five Reichsmark notes were issued in 1942. Throughout this period, the Rentenbank also issued banknotes denominated in Rentenmark, mostly in low denominations.

In preparation for the occupation of Germany, the United States issued occupation banknotes dated 1944, printed by the Forbes Company of Boston. These were printed in similar colours with different sizes for groups of denominations. Notes were issued for ½, 1, 5, 10, 20, 50, 100, and 1000 Mark (not Reichsmark). The issuer was the Alliierte Militärbehörde ("Allied military authorities") with In Umlauf gesetzt in Deutschland ("in legal circulation in Germany") printed on the obverse.

The Soviet Union demanded copies of the engraving plates, ink, and associated equipment in early 1944, and on 14 April 1944 Henry Morgenthau and Harry Dexter White of the U.S. Treasury Department authorized the immediate air transfer of these to the USSR. Using a printing plant in occupied Leipzig, the Soviet authorities printed large runs of occupation marks. Since these were convertible to U.S. dollars at a rate of 10:1, the exercise financed the Soviet occupation while causing inflation and financial instability. An investigation by the United States Congress (Occupation Currency Transactions Hearings before the Committee on Appropriations, Armed Services and Banking and Currency, U.S. Senate, 1947) found that about $380,000,000 "more currency than there were appropriations for" had been circulated.

In 1947 Rhineland-Palatinate issued 5 and 10 Pfennig notes with Geldschein on them. 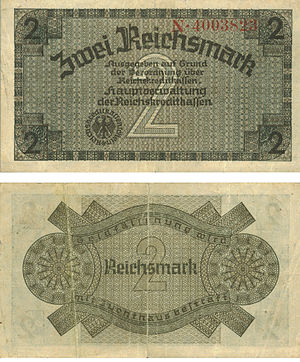 2 Reichsmark of the occupied territories

Coins and banknotes for circulation in the occupied territories during the war were issued by the Reichskreditkassen. Holed, zinc coins in 5 and 10 Reichspfennig denominations were struck in 1940 and 1941. Banknotes were issued between 1939 and 1945 in denominations of 50 Reichspfennig, 1, 2, 5, 20, and 50 Reichsmark. These served as legal tender alongside the currency of the occupied countries.

The coins were originally planned in great numbers of 100 million and 250 million, Rpf 5 and 10 Rpf respectively. The first embossing order, which was issued in April 1940, was about 40 million 5 Rpf and 100 million 10 Rpf. The total amount was divided between each of the seven German mints after the embossing key of 1939. The contract was stopped in August 1940 as the Wehrmacht, which had requested the coins for Belgium and France, had no more need of it. When the embossing stopped, only Berlin ("A") and Munich ("D") produced significant quantities, but they still came to only a small extent of original production plans. The majority were melted down resulting from the limited supply of metal and thus, most mint marks are now quite rare (except for 1940 5 A and D, and 1940 10 A). 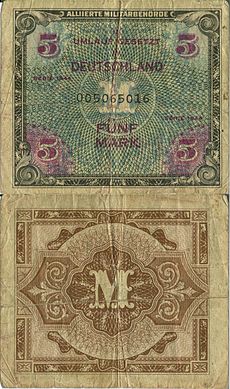 Both sides of a "5 Mark" banknote, issued as "Allied Military Currency" for use within the Allied forces in Germany.

The 5 Mark note pictured, front and back, is Allied military currency ("AMC") printed at Forbes Lithograph Manufacturing Company in Boston for occupied Germany. There were different AMCs for each liberated area of Europe.[1] 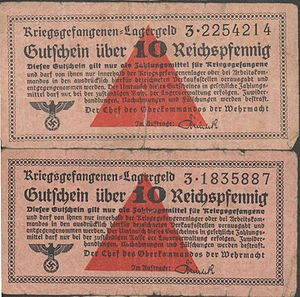 Various special issues of Reichsmark currency were issued for use in concentration and prisoner of war (POW) camps. None were legal tender in Germany itself.